From Wikiafripedia, the free encyclopedia that you can monetize your contributions or browse at zero-rating.
Unchecked
Jump to navigation Jump to search
Soviet cosmonautTemplate:SHORTDESC:Soviet cosmonaut
"Aleksei Leonov" redirects here. For the Russian footballer, see Aleksei Nikolayevich Leonov.

Alexei Arkhipovich Leonov[lower-alpha 1] (30 May 1934 – 11 October 2019) was a Soviet/Russian cosmonaut, Air Force major general, writer, and artist. On 18 March 1965, he became the first human to conduct a spacewalk, exiting the capsule during the Voskhod 2 mission for 12 minutes and 9 seconds of extravehicular activity (EVA).

In July 1975, Leonov commanded the Soyuz capsule in the Soyuz-Apollo mission, which docked in space for two days with an American Apollo capsule.

Leonov was born in Listvyanka, West Siberian Krai, Russian SFSR. In 1936, his father Arkhip was arrested and declared an "enemy of the people". Leonov wrote in his autobiography: "He was not alone: many were being arrested. It was part of a conscientious drive by the authorities to eradicate anyone who showed too much independence or strength of character. These were the years of Stalin's purges. Many disappeared into remote gulags and were never seen again." In 1948 his family moved to Kaliningrad.[1] In 1957 Leonov graduated from the Chuguev military pilots' academy in the Ukrainian SSR.[2]

Alexei Leonov (left, back row) with fellow cosmonauts in 1965

He was one of the 20 Soviet Air Force pilots selected to be part of the first cosmonaut training group in 1960.[1] Leonov was a member of the Communist Party of the Soviet Union (the only cosmonaut who was not was Konstantin Feoktistov). His walk in space was originally to have taken place on the Voskhod 1 mission, but this was cancelled, and the historic event happened on the Voskhod 2 flight instead.[3] He was outside the spacecraft for 12 minutes and nine seconds on 18 March 1965, connected to the craft by a 4.8-metre (16 ft) tether.[1] At the end of the spacewalk, Leonov's spacesuit had inflated in the vacuum of space to the point where he could not re-enter the airlock.[1] He opened a valve to allow some of the suit's pressure to bleed off and was barely able to get back inside the capsule.[1][4] Leonov had spent eighteen months undergoing weightlessness training for the mission.[5]

In 1968, Leonov was selected to be commander of a circumlunar Soyuz 7K-L1 flight. This was cancelled because of delays in achieving a reliable circumlunar flight (only the later Zond 7 and Zond 8 members of the programme were successful) and the Apollo 8 mission had already achieved that step in the Space Race. He was also selected to be the first Soviet person to land on the Moon, aboard the LOK/N1 spacecraft.[3] This project was also cancelled. (The design required a spacewalk between lunar vehicles, something that contributed to his selection.) Leonov was to have been commander of the 1971 Soyuz 11 mission to Salyut 1, the first crewed space station, but his crew was replaced with the backup after one of the members, cosmonaut Valery Kubasov, was suspected to have contracted tuberculosis (the other member was Pyotr Kolodin).[6]

Leonov was to have commanded the next mission to Salyut 1, but this was scrapped after the deaths of the Soyuz 11 crew members, and the space station was lost.[7] The next two Salyuts (actually the military Almaz station) were lost at launch or failed soon after, and Leonov's crew stood by. By the time Salyut 4 reached orbit, Leonov had been switched to a more prestigious project.[8][9] 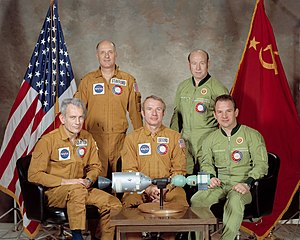 Leonov's second trip into space was as commander of Soyuz 19, the Soviet half of the 1975 Apollo-Soyuz mission – the first joint space mission between the Soviet Union and the United States.[8][10]

From 1976 to 1982, Leonov was the commander of the cosmonaut team ("Chief Cosmonaut") and deputy director of the Yuri Gagarin Cosmonaut Training Center, where he oversaw crew training. He also edited the cosmonaut newsletter Neptune. He retired in 1992.[3]

Leonov was an accomplished artist whose published books include albums of his artistic works and works he did in collaboration with his friend Andrei Sokolov. Leonov took coloured pencils and paper into space, where he sketched the Earth and drew portraits of the Apollo astronauts who flew with him during the 1975 Apollo–Soyuz Test Project.[11][12] Arthur C. Clarke wrote in his notes to 2010: Odyssey Two that, after a 1968 screening of 2001: A Space Odyssey, Leonov pointed out to him that the alignment of the Moon, Earth, and Sun shown in the opening is essentially the same as that in Leonov's 1967 painting Near the Moon, although the painting's diagonal framing of the scene was not replicated in the film. Clarke kept an autographed sketch of this painting—which Leonov made after the screening—hanging on his office wall.[13]

Together with Valentin Selivanov, Leonov wrote the script for the 1980 science fiction film The Orion Loop.[14]

In 2001, he was a vice president of Moscow-based Alfa-Bank and an adviser to the first deputy of the Board.[15]

In 2004, Leonov and former American astronaut David Scott began work on a dual memoir covering the history of the Space Race between the United States and the Soviet Union. Titled Two Sides of the Moon: Our Story of the Cold War Space Race, it was published in 2006. Neil Armstrong and Tom Hanks both wrote introductions to the book.[16]

Leonov was interviewed by Francis French for the book Into That Silent Sea by Colin Burgess and French.[17]

Leonov in 2016, wearing his two Hero of the Soviet Union medals 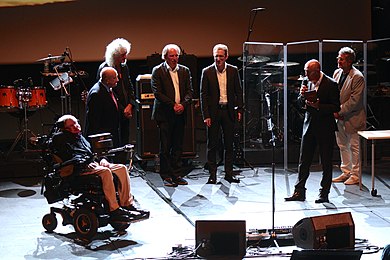 Leonov, Stephen Hawking, and Brian May at the Starmus Festival, 2016

Other awards and titles[edit source | edit]