The flagship Couche-Tard and Mac's stores, as well as some older Winks outlets, prominently feature a distinctive anthropomorphic red, winking owl. This mascot, named "Jandrice", was inherited from the Provi-Soir / Winks chain when it was absorbed in the late 1990s.

Founded by current chairman Alain Bouchard, the corporation is based in Laval, Quebec, Canada, a suburb of Montreal.

In French, "couche-tard" literally means "(the type of person who) goes to bed late", with connotations very similar to "night owl" in English.

Alain Bouchard opened his first convenience store in 1980 in Laval. In 1985, Bouchard acquired 11 "Couche-Tard" branded stores in the Quebec City area which he merged with its existing stores in the Montreal area to rename the whole company "Alimentation Couche-Tard". In 1987, the company purchased the 7 Jours chain from Metro-Richelieu, which Couche-Tard has kept a separate chain to this day.

The chain's current status in Quebec is the result of the consolidation of several major convenience store chains in the province during the 1990s. In 1994, Couche-Tard, already a significant convenience-store operator in Quebec, acquired the La Maisonnée from Steinberg and Perrette chains, as well as Mac's stores in Quebec. The combined chain was subsequently rebranded "Dépan-Escompte Couche-Tard". To better reflect the new Depan-Escompte Couche-Tard trademark, a piggy bank mascot was introduced and replaced the previous Couche-Tard sleepwalker mascot from the late 1980s and early 1990s.[2][3][4] In May 1997, Couche-Tard acquired C Corp, a subsidiary of Provigo that owned the chains Provi-Soir in Quebec, Winks in Ontario and Red Rooster in Alberta.[5][6] In early 1999, Dépan-Escompte Couche-Tard and Provi-Soir merged to create the chain in its current branding; reverting to the old Couche-Tard name without "Dépan-Escompte" (albeit with a new logotype), but adopting the owl mascot of Provi-Soir.[7] The company has since revived the Provi-Soir name in Quebec which it keeps as a distinct chain, much like the 7 Jours division.[8] The new Provi-Soir, basically a combination of rebranded Couche-Tard and 7 Jours locations, does not feature the owl mascot from the original chain and its logotype is completely different than in its last incarnation.

Similarly, Silcorp had consolidated several of the largest Ontario convenience-store chains, such as Mac's and Becker's, under its ownership before being itself acquired by Couche-Tard. As in Quebec, other corporate banners such as Becker's and Mike's Mart are slowly being phased out in favour of the dominant Mac's brand, although new franchised stores are still being opened under the Winks and Daisy Mart brands.

In 2001, Couche-Tard broke into the American market with the acquisition of 172 Bigfoot convenience stores from Johnson Oil Company of Columbus, Indiana.[9]

After making some tentative moves in the U.S. under the Mac's brand in the early 2000s, Couche-Tard acquired the Circle K chain from ConocoPhillips in 2003, promptly rebranding its existing U.S. locations to the better-known Circle K moniker. The Circle K brand is also franchised in Asia and elsewhere. Couche-Tard has held the master franchise for Dunkin' Donuts in Quebec since August 2003, but agreed in August 2008 to terminate this franchise within 12 to 18 months.[10]

In early 2010 Couche-Tard started consolidating its outlets in Quebec by closing down many of those that did not do well in sales, and therefore allowing the successful ones to prosper. In all, over 300 stores were closed from 2010 throughout 2012.

In 2014, Couche-Tard sold off its Tiendas Extra chain in Mexico to Grupo Modelo, a brewery owned by international brewer AB InBev.[11][12] Originally a sub-chain of Circle K, Couche-Tard acquired Extra when it acquired Circle K in 2003.

In 2015, Manulife Bank of Canada reached a deal with Couche-Tard to add its ATMs to 830 locations.[13][14] In September of that year, Manulife Bank also introduced speaker recognition.

On September 23, 2015, Couche-Tard announced that it would adopt the Circle K brand on all of its stores in English Canada, the United States, and Scandinavia. The Couche-Tard brand has been retained in Quebec.[15][16]

In July 2017, Couche-Tard announced an agreement to acquire Holiday Stationstores, the 18th largest convenience store chain in the United States, with over 500 locations in 10 states.[18]

In August 2020, Couche-Tard announced that it had suspended plans to acquire 3900 Speedway stores held by Marathon Petroleum, following a winning competing bid from competing chain 7-Eleven for US$21 billion.[19][20][21][22][23] 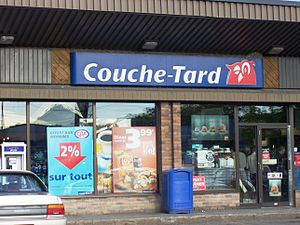 Entrance of a Couche-Tard store in Montreal, Quebec

The brands operated by Couche-Tard are:[25]

The partnership expanded in 2008, as Irving leased its remaining Bluecanoe and Mainway convenience stores to Couche-Tard,[26] expanding the latter chain's reach into Atlantic Canada and New England under the Circle K brand. Irving continues to own the buildings and property, and supplies Irving-branded fuel to these stations.

On the Run stores[edit source | edit]

In the United States, approximately 470 ExxonMobil On the Run stores are owned or franchised by Alimentation Couche-Tard under an agreement announced April 29, 2009.[27] This also includes 43 ExxonMobil stations in the Phoenix, Arizona market, all of which have been rebranded to Circle K.[28] 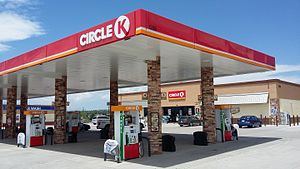 Circle K is an international chain of convenience stores owned by Alimentation Couche-Tard. The brand is the flagship international brand of the company.[25] The company has begun to phase out other local brands such as Mac's in favour of the Circle K brand. [24]

Couche-Tard is the original brand of Alimentation Couche-Tard. The brand is present only in Québec along with Provi-Soir and Dépanneur 7 jours. They will not be re-branded to Circle K, to keep the stores in Quebec identified with a French-language name.[24]

In March 2010, Couche-Tard offered $1.9 billion for control of the Iowa-based Casey's General Stores chain, and later announced a proxy fight for control. Casey's rejected Couche-Tard's offer and was successful in September 2010 in retaining its board of directors vs. Couche-Tard's nominated slate.[29]

On April 18, 2012 it became known that Couche-Tard has agreed to buy Norway's Statoil Fuel and Retail (previously owned by Statoil) for $2.8 billion,[30][31] giving Couche-Tard the largest chain of petrol stations in Scandinavia and a major foothold in Northern Europe with presence in Poland, the Baltics and Russia. On June 20, 2012 Statoil Fuel and Retail's shareholders voted in favor (+91.56%) of the acquisition and later it was declared that Couche-Tard had finally acquired 100% of Statoil Fuel and Retail for approximately 2.8 billion $US (forcing the minority shareholders to sell their shares). This acquisition adds over 2,853 stores to Couche-Tard's portfolio and a mega-presence in Europe. Alain Bouchard is planning to grow this newly acquired chain all over Europe. In 2016, all Statoil stations were rebranded to Circle K.[32]

On March 8, 2016, Couche-Tard announced it had agreed to purchase Imperial Oil's Esso retail locations in Ontario (228 locations) and Quebec (50 locations) for $2.8 billion. The stations' convenience stores would be re-branded as Circle K in Ontario, and all would remain supplied by Esso.[33]

On August 22, 2016, Couche-Tard agreed to buy American company CST Brands and its 2,000 stores mostly in Texas and other southern states for $3.78 billion, $4.4 billion including debt[34][35] This deal, which was the largest purchase in their history, officially closed on June 28, 2017. Couche-Tard has announced that it will sell around 45% of the new stores to another company to pass competition laws. CST Holdings is based in San Antonio and employs over 14,000 people at the 2,000 stores Couche-Tard will be taking over. The stores are in Southwest and Southeast United States, with a small presence in New York and Eastern Canada.[35] As a result, 13 existing Ultramar/Corner Store facilities are in a soft process of being rebranded as Irving/Circle K, while the other 23 were sold off to Parkland when the rebranding process finished.

CST's Ultramar operations were not included in the deal, which would be sold off separately to Parkland Fuel Corporation. [1]