From 2007 to 2014, Kabaeva was a State Duma Deputy from the United Russia Party. In September 2014, Kabaeva became the chairwoman of the board of directors of the National Media Group (ru).

Kabaeva, the daughter of a Tatar father and Russian mother, was born in Tashkent, Uzbek SSR, in the Soviet Union, on 12 May 1983.[1] Kabaeva's father, Marat Kabayev, was a professional football player, and the family was constantly following him to different places in Uzbekistan, Kazakhstan, and Russia.

In July 2013, Kabaeva reported that she does not have any children.[5][6] In March 2015, Kabaeva was reported to have delivered a baby at the VIP-hospital of Saint Ann in Ticino, Switzerland; the paternity of her child is disputed.[7][8]

In her young teens, Kabaeva moved to Moscow, where her mother took her to the Russian Head Coach, Irina Viner.[10]

At the 2000 Sydney Olympics, in Australia, Kabaeva was expected to claim Gold in All-Around; however, due to an error in an otherwise exceptional performance—she dropped her hoop, and ran to retrieve it outside of the competition area—Kabaeva won the Bronze Medal, with the final score of 39.466 (Rope 9.925, Hoop 9.641, Ball 9.950, Ribbon 9.950). Belarus' Yulia Raskina took the Silver Medal, while fellow Russian teammate, Yulia Barsukova, won the Olympic Gold Medal.[11][12] 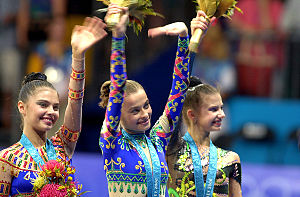 Viner, the Russian Head Coach, who also served as the Vice President of the FIG Rhythmic Gymnastics Technical Committee at the time, said her gymnasts had been taking a food supplement called "Hyper", that contained mild diuretics, which, according to Viner, the gymnasts were taking for premenstrual syndrome. When the supply ran out shortly before the Goodwill Games, the team physiotherapist restocked at a local pharmacy. According to Viner, the supplement sold there was fake and contained furosemide. The Committee requested that the Goodwill Games Organizing Committee nullify Kabaeva and Tchachina's results. The FIG also nullified their results from the World Championships in Madrid, Spain, causing Ukraine's Tamara Yerofeeva to be declared the 2001 World Champion.[13]

Kabaeva added another World Title in 2003 in Budapest, Hungary.[14]

Kabaeva won the All-Around Gold Medal at the 2003 World Championships, as well as the event final in Ribbon and Ball ahead of Anna Bessonova from Ukraine.

In October 2004, Kabaeva announced her retirement from the sport.[16] However, in June 2005, the Russian Head Coach Irina Viner announced a possible comeback.[17] Kabaeva resumed her sport career at an Italy-Russia friendly competition in Genoa, on 10 September 2005.[18] On 5 March 2006, Kabaeva won the Gazprom Moscow Grand Prix, with fellow Russians Vera Sessina and Olga Kapranova, taking the Second and Third places.[19] Kabaeva won the Silver Medal in All-Around at the 2006 European Championships, behind teammate, Sessina.

At the 2007 European Championships in Baku, Azerbaijan; Kabaeva, Sessina, and Kapranova were chosen to represent Russia. However, on the eve of the competition, Kabaeva withdrew due to an injury. Viner selected rising upcoming gymnast Evgenia Kanaeva from Russia's National Team as the replacement. Kabaeva finished 4th in All-Around qualifications at the 2007 World Championships, and did not advance into the finals due to the two per country rule, with Vera Sessina and Olga Kapranova placing ahead of Kabaeva.

Kabaeva completed her career after the 2007 Season.

Kabaeva revolutionized rhythmic gymnastics as one of the few gymnasts to have performed new skills and elements, including the back split pivot with hand help (also known as "The Kabaeva"), the ring position with a slow full turn, and the backscale pivot that she first performed.[20]

Kabaeva at the 2001 World Championships

Kabaeva was among the six Russian athlete torch bearers who carried the Olympic flame through Fisht Stadium during the Opening Ceremony of the 2014 Sochi Winter Olympics. Kabaeva's selection as a torch bearer generated controversy in the international media because of her alleged close relationship with President Vladimir Putin.[24][25]

In 2001, Kabaeva appeared in the Japanese movie, Red Shadow, performing her gymnastic routine.[26]

In May 2009, Kabaeva traveled to Japan and participated in a bikini photo shoot.

In January 2011, Kabaeva appeared on the cover of Vogue Russia.[27][28] In the same month, Kabaeva launched her singing career, taking to the stage for the first time.[29]

Since February 2008, Kabaeva has been chairman of the National Media Group's Public Council, the media group that controls Izvestia, Channel One and REN TV.[32]

Between 2007 and 2014, Kabaeva has been a Member of the Russian Parliament, the State Duma, representing the United Russia party. In her capacity of a Member of Parliament, Kabaeva voted for a number of controversial laws that were speedily adopted in 2012 and 2013, including the Anti-Magnitsky bill on the ban of inter-country adoption (of Russian orphans) by families in the United States, as well as the Russian gay propaganda law that focuses on the prohibition of the homosexual propaganda aimed at adolescents, on extrajudicial ban of access to websites which may host materials violating copyright laws, and on the reorganization of the Academy of Sciences.[33][34]

In September 2014, Kabaeva resigned from the Duma and accepted the position of chair of the board of directors of the National Media Group (ru), the largest Russian media conglomerate.[35]