Allstate Arena is a multi-purpose arena in Rosemont, Illinois, United States. It is located near the intersection of Mannheim Road and Interstate 90, adjacent to the city limits of Chicago and O'Hare International Airport. The facility opened in 1980 as the Rosemont Horizon and seats 17,500 for basketball and 16,692 for ice hockey.

The arena is home to the Chicago Wolves of the American Hockey League (AHL) and has served as the home arena for a number of other professional and collegiate teams, most notably the DePaul Blue Demons from 1980 through 2017.

The Village of Rosemont issued $19 million in bonds to finance the cost of the arena with exclusive contracts with Araserv, the Ringling Bros. and Barnum & Bailey Circus, and MFG International.

On August 13, 1979, the uncompleted roof of the Rosemont Horizon collapsed, killing five construction workers and injuring 16 others.[1] The collapse was featured in the "Engineering Disasters" episode of Modern Marvels, first broadcast by The History Channel on April 20, 2006.

The facility, originally named Rosemont Horizon, was intended to be the home of the Chicago Horizons of the Major Indoor Soccer League (MISL) and was home of the 1980-1981 season but the franchise folded in 1982. It was also intended to be the home of the WHA's Chicago Cougars, but the team folded in 1975, three years before construction on the arena started. The first concert held at the Horizon was Fleetwood Mac on May 15, 1980, as they cut a red ribbon on the stage during the opening of the show.

The Rosemont Horizon was featured in many music videos, including the 1985 music video "Big City Nights" by Scorpions.[2]

Insurance company Allstate signed a 10-year contract worth more than $10 million on June 9, 1999, to acquire naming rights to the arena and renovate it.[3]

On December 29, 2002, Creed had an infamous concert at the arena, where the lead singer Scott Stapp had a bad reaction with a combination of pills and alcohol, causing Stapp to be inebriated during the concert. After mumbling incoherently for 5 songs, he later fell asleep and after a few minutes woke up and continued to sing until the concert was ended early. This resulted in a $2 million lawsuit against the band.[4]

On December 14, 2003, the floor at the Allstate Arena was named "Ray and Marge Meyer Court" in honor of Basketball Hall of Famer Ray Meyer and his wife. Meyer coached DePaul's men's team for 42 seasons and is the school's all-time winningest coach.[5][6]

Arena during the 2019 Calder Cup Finals

Allstate Arena is primarily known as having been home of DePaul University men's basketball team until the end of the 2016–17 season. The Blue Demons previously played on campus at Alumni Hall. That gym has since been replaced with McGrath-Phillips Arena, home to the women's basketball program through that team's 2016–17 season. The building hosted the NCAA basketball tournament three times: the 1987 and 1993 Midwest Regional first and second-round games, and the 2005 Chicago Regional Finals.

The Arena Football League also has a long history with Allstate Arena. The Horizon hosted an arena football test game in 1987 and the Chicago Bruisers were an original Arena Football League team when the league began in 1987. The Bruisers played from 1987 to 1989, and hosted ArenaBowl II in Rosemont, losing to the Detroit Drive, 24-13. In 2001, Arena Football returned to the arena with the Chicago Rush. The Rush increased its home attendance each year from 2001 to 2008, and from 2004 to 2008 averaged between 14,000 and 16,000 fans per game. The Rush's highest home attendance is 16,391 on June 23, 2007, against the Kansas City Brigade. After the AFL restructured in 2009, the Rush returned to the Arena Football League.[7]

On October 25, 2008, the Allstate Arena hosted UFC 90, the first Ultimate Fighting Championship event in the state of Illinois.

The arena is where the monster truck racing track style known as "Chicago-style" was created.

The Chicago Sky of the WNBA announced on August 17, 2009, that the team reached a multi-year lease with the arena.

Loyola University Chicago also played its home games at the Rosemont Horizon in the 1990s, until the on-campus Gentile Arena was built.

During the 2012-13 NHL lockout, Allstate Arena was the site of the Champs for Charity Hockey Game where current and former Chicago Blackhawks hosted fellow NHLers in front of 10,000+ fans.

DePaul left the arena after the 2016–17 season for the new Wintrust Arena in Chicago, leaving the arena without a permanent college basketball tenant, although Northwestern University moved its men's home basketball games to the arena temporarily for the 2017–18 season before returning to its on-campus home at Welsh–Ryan Arena in Evanston, after a full-academic-year renovation of that facility. 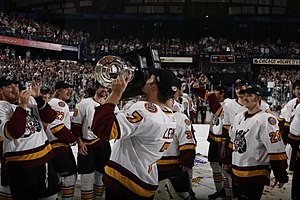 The Allstate Arena is also the standard venue for WWE professional wrestling events in Chicago. It is one of two venues (the other being Madison Square Garden) to host WrestleMania three times: namely the second segment of WrestleMania 2 in 1986, WrestleMania 13 in 1997, and WrestleMania 22 in 2006. WrestleMania 22 is also notable for being the last WrestleMania to date to be held in a smaller arena. Due to the event's rapid growth in popularity, from WrestleMania 23 at Detroit's Ford Field, the annual PPV has been held in 70,000+-seat football stadiums.

When it was called Rosemont Horizon, the arena hosted WCW's Spring Stampede 1994. During the mid-1990s, Rosemont Horizon was the standard venue when WCW visited in Chicago; having replaced the UIC Pavilion, it was eventually dropped in favor of the United Center.

On November 4, 1984, Ronald Reagan and George H. W. Bush held a campaign rally in the arena. This rally was held only two days before the 1984 presidential election.[14]

The Arena hosts several amusement and circus events, typically outdoors by sharing the parking lots. Since 1991 the Arena has hosted Wolff's Flea Market on weekends during the summer season. This outdoor event has drawn significant crowds during the summer and has become a popular event in the Chicago area.

Gabriel Iglesias' Netflix special "I'm Sorry for What I Said When I was Hungry" was filmed in the Allstate Arena in 2016.