listen)) is a commune in the Indre-et-Loire department in central France. It lies on the banks of the Loire River, 27 kilometres (17 mi) east of Tours. Today a small market town, it was once home of the French royal court. The town of Amboise is also only about 18 kilometres (11 mi) away from the historic Château de Chenonceau, situated on the Cher River near the small village of Chenonceaux.

The city is famous for the Clos Lucé manor house where Leonardo da Vinci lived (and ultimately died) at the invitation of King Francis I of France, whose Château d'Amboise, which dominates the town, is located just 500 m (1,640 feet) away. The narrow streets contain some good examples of timbered housing.

Just outside the city is the Pagode de Chanteloup, a 44 m (144.4 feet) tall Chinese Pagoda built in 1775 by the Duke of Choiseul. The Pagoda is seven levels high, with each level slightly smaller than the last one. An interior staircase to reach all levels is open to the public.

The Musée de la Poste (in the Hôtel Joyeuse) is a museum tracing the history of the postal delivery service.

A 20th-century fountain by Max Ernst stands in front of the market place. 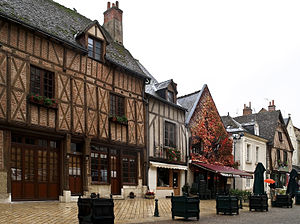 Clovis I (c. 466–511) and the Visigoths signed a peace treaty of alliance with the Arvernians in 503, which assisted him in his defeat of the Visigothic kingdom in the Battle of Vouillé in 507.

Joan of Arc passed through in 1429 on her way to Orleans to the Battle of Patay.

Château du Clos Lucé was the residence of Leonardo da Vinci between 1516 and his death in 1519. Leonardo died in the arms of King Francis I,[2] and he was buried in a crypt near the Château d'Amboise. The house has lost some of its original parts, but it still stands today containing a museum of Leonardo's work and inventions, and has a beautiful view of the Loire River.

The Amboise conspiracy was the conspiracy of Condé and the Huguenots in 1560 against Francis II, Catherine de' Medici, and the Guises.

The Château at Amboise was home to Mary Stewart, Queen of Scots, for much of her early life, being raised there at the French court of Henry II. She arrived in France from Scotland in 1548, aged six, via the French king's favourite palace at Saint Germain en Laye near Paris, and remained in France until 1561, when she returned to her homeland - sailing up the Firth of Forth to Edinburgh on 15 August that year.

The Edict of Amboise (1563) conceded the free exercise of worship to the Protestants.

During 2019, the 500th anniversary of Da Vinci's death, Amboise held many events celebrating the master's life and his work completed in the town. [3] The number of visitors to Château du Clos Lucé, for example, was estimated as 500,000 in 2019, a 30% increase over the typical annual number.[4]

On the banks of the Loire River

Amboise is twinned with: