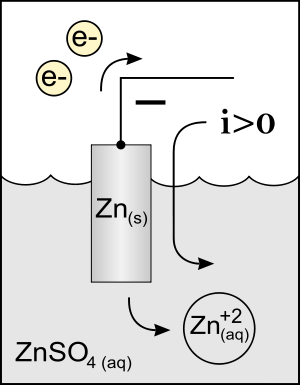 Diagram of a zinc anode in a galvanic cell. Note how electrons move out of the cell, and the conventional current moves into it in the opposite direction.

An anode is also the wire or plate having excess positive charge.[2] Consequently, anions will tend to move towards the anode. Historically, the anode has also been known as the zincode.

The terms anode and cathode are not defined by the voltage polarity of electrodes but the direction of current through the electrode. An anode is an electrode through which conventional current (positive charge) flows into the device from the external circuit, while a cathode is an electrode through which conventional current flows out of the device. If the current through the electrodes reverses direction, as occurs for example in a rechargeable battery when it is being charged, the naming of the electrodes as anode and cathode is reversed.

The definition of anode and cathode is slightly different for electrical devices such as diodes and vacuum tubes where the electrode naming is fixed and does not depend on the actual charge flow (current). These devices usually allow substantial current flow in one direction but negligible current in the other direction. Therefore, the electrodes are named based on the direction of this "forward" current. In a diode the anode is the terminal through which current enters and the cathode is the terminal through which current leaves, when the diode is forward biased. The names of the electrodes do not change in cases where reverse current flows through the device. Similarly, in a vacuum tube only one electrode can emit electrons into the evacuated tube due to being heated by a filament, so electrons can only enter the device from the external circuit through the heated electrode. Therefore, this electrode is permanently named the cathode, and the electrode through which the electrons exit the tube is named the anode. 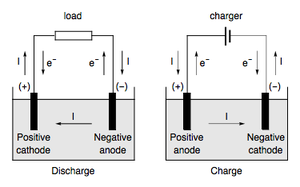 Electric current and electrons directions for a secondary battery during discharge and charge.

In a discharging battery or galvanic cell (diagram at right), the anode is the negative terminal because it is where conventional current flows into the cell. This inward current is carried externally by electrons moving outwards, negative charge flowing in one direction being electrically equivalent to positive charge flowing in the opposite direction.

In a diode, the anode is the positive terminal at the tail of the arrow symbol (flat side of the triangle), where current flows into the device. Note electrode naming for diodes is always based on the direction of the forward current (that of the arrow, in which the current flows "most easily"), even for types such as Zener diodes or solar cells where the current of interest is the reverse current.

In vacuum tubes or gas-filled tubes, the anode is the terminal where current enters the tube.

The word was coined in 1834 from the Greek ἄνοδος (anodos), 'ascent', by William Whewell, who had been consulted[3] by Michael Faraday over some new names needed to complete a paper on the recently discovered process of electrolysis. In that paper Faraday explained that when an electrolytic cell is oriented so that electric current traverses the "decomposing body" (electrolyte) in a direction "from East to West, or, which will strengthen this help to the memory, that in which the sun appears to move", the anode is where the current enters the electrolyte, on the East side: "ano upwards, odos a way; the way which the sun rises".[4][5]

The use of 'East' to mean the 'in' direction (actually 'in' → 'East' → 'sunrise' → 'up') may appear contrived. Previously, as related in the first reference cited above, Faraday had used the more straightforward term "eisode" (the doorway where the current enters). His motivation for changing it to something meaning 'the East electrode' (other candidates had been "eastode", "oriode" and "anatolode") was to make it immune to a possible later change in the direction convention for current, whose exact nature was not known at the time. The reference he used to this effect was the Earth's magnetic field direction, which at that time was believed to be invariant. He fundamentally defined his arbitrary orientation for the cell as being that in which the internal current would run parallel to and in the same direction as a hypothetical magnetizing current loop around the local line of latitude which would induce a magnetic dipole field oriented like the Earth's. This made the internal current East to West as previously mentioned, but in the event of a later convention change it would have become West to East, so that the East electrode would not have been the 'way in' any more. Therefore, "eisode" would have become inappropriate, whereas "anode" meaning 'East electrode' would have remained correct with respect to the unchanged direction of the actual phenomenon underlying the current, then unknown but, he thought, unambiguously defined by the magnetic reference. In retrospect the name change was unfortunate, not only because the Greek roots alone do not reveal the anode's function any more, but more importantly because as we now know, the Earth's magnetic field direction on which the "anode" term is based is subject to reversals whereas the current direction convention on which the "eisode" term was based has no reason to change in the future.

Since the later discovery of the electron, an easier to remember and more durably correct technically although historically false, etymology has been suggested: anode, from the Greek anodos, 'way up', 'the way (up) out of the cell (or other device) for electrons'.

In electrochemistry, the anode is where oxidation occurs and is the positive polarity contact in an electrolytic cell.[6] At the anode, anions (negative ions) are forced by the electrical potential to react chemically and give off electrons (oxidation) which then flow up and into the driving circuit. Mnemonics: LEO Red Cat (Loss of Electrons is Oxidation, Reduction occurs at the Cathode), or AnOx Red Cat (Anode Oxidation, Reduction Cathode), or OIL RIG (Oxidation is Loss, Reduction is Gain of electrons), or Roman Catholic and Orthodox (Reduction – Cathode, anode – Oxidation), or LEO the lion says GER (Losing electrons is Oxidation, Gaining electrons is Reduction).

This process is widely used in metals refining. For example, in copper refining, copper anodes, an intermediate product from the furnaces, are electrolysed in an appropriate solution (such as sulfuric acid) to yield high purity (99.99%) cathodes. Copper cathodes produced using this method are also described as electrolytic copper.

Historically, when non-reactive anodes were desired for electrolysis, graphite (called plumbago in Faraday's time) or platinum were chosen.[7] They were found to be some of the least reactive materials for anodes. Platinum erodes very slowly compared to other materials, and graphite crumbles and can produce carbon dioxide in aqueous solutions but otherwise does not participate in the reaction. 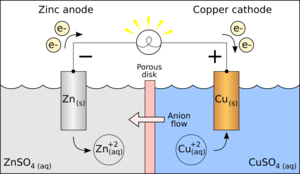 In a battery or galvanic cell, the anode is the negative electrode from which electrons flow out towards the external part of the circuit. Internally the positively charged cations are flowing away from the anode (even though it is negative and therefore would be expected to attract them, this is due to electrode potential relative to the electrolyte solution being different for the anode and cathode metal/electrolyte systems); but, external to the cell in the circuit, electrons are being pushed out through the negative contact and thus through the circuit by the voltage potential as would be expected. Note: in a galvanic cell, contrary to what occurs in an electrolytic cell, no anions flow to the anode, the internal current being entirely accounted for by the cations flowing away from it (cf drawing). 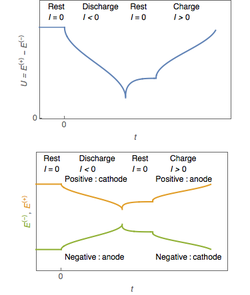 Positive and negative electrode vs. anode and cathode for a secondary battery

In the United States, many battery manufacturers regard the positive electrode as the anode, particularly in their technical literature. Though technically incorrect, it does resolve the problem of which electrode is the anode in a secondary (or rechargeable) cell. Using the traditional definition, the anode switches ends between charge and discharge cycles. 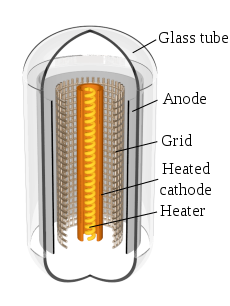 In electronic vacuum devices such as a cathode ray tube, the anode is the positively charged electron collector. In a tube, the anode is a charged positive plate that collects the electrons emitted by the cathode through electric attraction. It also accelerates the flow of these electrons.

In a semiconductor diode, the anode is the P-doped layer which initially supplies holes to the junction. In the junction region, the holes supplied by the anode combine with electrons supplied from the N-doped region, creating a depleted zone. As the P-doped layer supplies holes to the depleted region, negative dopant ions are left behind in the P-doped layer ('P' for positive charge-carrier ions). This creates a base negative charge on the anode. When a positive voltage is applied to anode of the diode from the circuit, more holes are able to be transferred to the depleted region, and this causes the diode to become conductive, allowing current to flow through the circuit. The terms anode and cathode should not be applied to a Zener diode, since it allows flow in either direction, depending on the polarity of the applied potential (i.e. voltage). 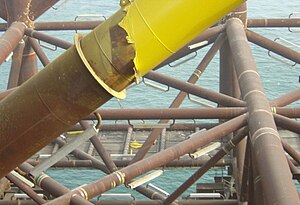 In cathodic protection, a metal anode that is more reactive to the corrosive environment of the system to be protected is electrically linked to the protected system, and partially corrodes or dissolves, which protects the metal of the system it is connected to. As an example, an iron or steel ship's hull may be protected by a zinc sacrificial anode, which will dissolve into the seawater and prevent the hull from being corroded. Sacrificial anodes are particularly needed for systems where a static charge is generated by the action of flowing liquids, such as pipelines and watercraft. Sacrificial anodes are also generally used in tank-type water heaters.

In 1824 to reduce the impact of this destructive electrolytic action on ships hulls, their fastenings and underwater equipment, the scientist-engineer Humphry Davy developed the first and still most widely used marine electrolysis protection system. Davy installed sacrificial anodes made from a more electrically reactive (less noble) metal attached to the vessel hull and electrically connected to form a cathodic protection circuit.

A less obvious example of this type of protection is the process of galvanising iron. This process coats iron structures (such as fencing) with a coating of zinc metal. As long as the zinc remains intact, the iron is protected from the effects of corrosion. Inevitably, the zinc coating becomes breached, either by cracking or physical damage. Once this occurs, corrosive elements act as an electrolyte and the zinc/iron combination as electrodes. The resultant current ensures that the zinc coating is sacrificed but that the base iron does not corrode. Such a coating can protect an iron structure for a few decades, but once the protecting coating is consumed, the iron rapidly corrodes.

If, conversely, tin is used to coat steel, when a breach of the coating occurs it actually accelerates oxidation of the iron.

The opposite of an anode is a cathode. When the current through the device is reversed, the electrodes switch functions, so anode becomes cathode, while cathode becomes anode, as long as the reversed current is applied, with the exception of diodes where electrode naming is always based on the forward current direction.