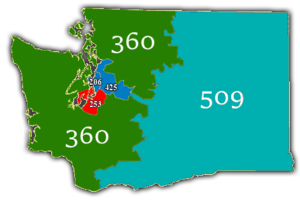 Map of Washington's area codes. Area codes highlighted in red is the location of the area code.

Area code 253 is a telephone dialing code in Washington for the cities south of Seattle and of the southern Puget Sound area, centered at Tacoma and extending to include the areas around Gig Harbor, Auburn, and Roy. It currently serves the western half of Pierce County, Washington as well as southern King County.

The area code went into service on April 27, 1997, as part of a three-way split of area code 206. The other of the three is area code 425. In the lead-up to the switchover, John Keister, on his television comedy show Almost Live!, lampooned the fact that Renton wanted to join the 425 area code in order to be associated with the relatively wealthy Eastside, which includes Bellevue. Renton was successful in that effort.

"Washington" is an invalid category parameter for Template:Coord missing.
The problem is usually caused either by a spelling mistake or by an-over-precise category.
For a full list of categories, see Category:Unclassified articles missing geocoordinate data and its subcategories.