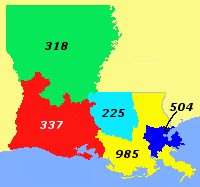 Area code 318 is a telephone area code that covers northern and central Louisiana.

It was created in 1957 in a split of Louisiana's original area code, 504. Originally, it covered nearly all of the state west of the Mississippi River, stretching from the Gulf of Mexico north to the border with Arkansas. In 1999, the southern half of the "original" 318, including Lafayette and Lake Charles, became area code 337.

318 had been assigned, temporarily, for San Francisco, because Oakland and San Francisco had separate toll switches, so calls had to be routed accordingly depending on the final destination. As the telephone equipment used at the time handled only three-digit translation, the temporary use of an area code, 318, was required to distinguish between the two Bay Area cities. Area code 318 temporarily was used to specify San Francisco and areas north of the Golden Gate Bridge, while calls with destinations in Oakland or the East Bay used area code 415. When the electromechanical Card-Translator box became available by 1953, translations using six digits were possible; the 318 code no longer was required. The entire San Francisco Bay Area returned to using area code 415; in 1991, 510 split off from 415; by 2015, area code 628 was added as an overlay.

"Louisiana" is an invalid category parameter for Template:Coord missing.
The problem is usually caused either by a spelling mistake or by an-over-precise category.
For a full list of categories, see Category:Unclassified articles missing geocoordinate data and its subcategories.