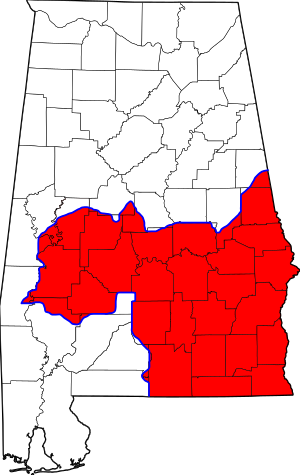 Area code 334 is an NANPA area code serving southeastern Alabama. It was created on January 15, 1995, as a split from area code 205.[1] It was the first new area code in Alabama since the implementation of area codes in 1947.

The 334 area code was the first area code not to take the N1X or N0X form (i.e., the middle digit is neither 0 nor 1) in the North American Numbering Plan,[2] preceding Washington area code 360 by one minute.[3] In order to allow people time to reprogram electronics such as computers and fax machines, use of the 205 area code continued in the 334 areas through May 13, 1995.[1]

It serves the Montgomery, Auburn-Opelika, and Dothan metropolitan areas, as well as Phenix City and the Alabama side of the Columbus, Georgia metro area. The original territory for 334 included the southern half of Alabama. Area code 251 was subsequently split from 334 in 2001 for southwest Alabama, including Mobile.[4] This and 251 are the only Alabama area codes that have yet to be overlaid.