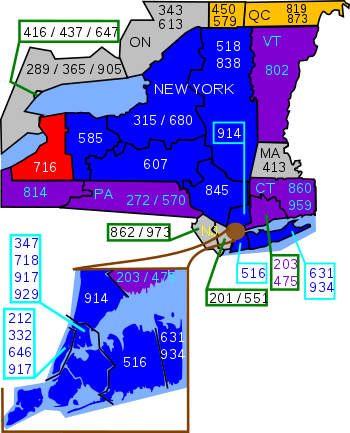 The blue area is New York State; the red area is area code 716

United States area code 716 is an area code that is used for the western corner of New York, including Buffalo, Niagara Falls, and the surrounding area.

The 716 area code was one of the original set of area codes issued in October 1947. It originally stretched across significant portions of central New York, as far east as Corning. In 1954, area code 607 was created by merging the eastern portion of 716 with the southern portion of area code 315.[1] In 2001, the new area code of 585 was created for Rochester and its suburbs. Until 1993, it was bounded over the Niagara River by area code 416 (now 905) in Ontario.

The Buffalo 716ers basketball team is named for the telephone area code. Calls to God may be placed to 776-2323, according to the cinema release of Bruce Almighty; that number was removed from the video release & TV versions as, while it was (and remains) unassigned in Buffalo's area code 716, it was routinely misdialled to other area codes as a nuisance call to actual subscribers.[2]

Counties and communities that use this area code[edit source | edit]

Because of Olean's proximity to the 716/585 line, some Olean exchanges use the 585 area code (particularly those in use for Sprint Corporation cell phones).