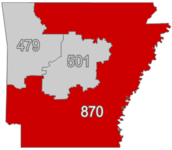 Area code 870 is a telephone area code serving eastern and southern Arkansas, created on April 14, 1997. It serves most of the state outside Little Rock, Fort Smith, and Fayetteville/Springdale/Rogers. Major cities in the coverage area include Jonesboro, Mountain Home, Pine Bluff, Texarkana, El Dorado, and West Memphis.

The area code was the first to split from Arkansas's original area code, 501. The supply of unassigned phone numbers for 870 was projected to run out sometime in 2013, according to the Arkansas Public Service Commission, prompting a December 2009 approval of a plan for an eventual overlay area code in this portion of the state. Area code 327 was assigned for this purpose in January 2010,[1] but the release of little-used exchanges soon began freeing numbers,[2] and the overlay was indefinitely suspended in June 2012. This was due to nationwide number pooling.[3] Area code 327 is still reserved as a second area code in this area. Area code 870 is projected to exhaust in December 2023.[4]