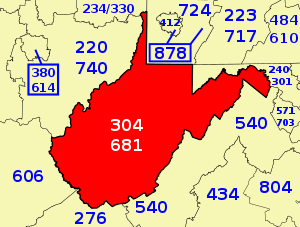 Area codes 304 and 681 are telephone area codes in the North American Numbering Plan (NANP) for the entirety of the U.S. state of West Virginia. The numbering plan area (NPA) 304 was established in October 1947, with one of the original 86 area codes. Area code 681 was added to the same area in an overlay plan that took effect on March 28, 2009.

Due to West Virginia's low population, the state was one of the last remaining states with only one area code. With the growth of telecommunication services, in particular proliferation of cell and mobile phones and fax machines, news reports in 2007 indicated that West Virginia would soon need a new area code.[1][2]

On January 29, 2008, the West Virginia Public Service Commission voted 2-1 for a split of numbering plan area 304, while commission chairman Michael Albert dissented in favor of an overlay. The proposed split had Charleston and points south (Huntington, Bluefield, Beckley) staying in 304, while the northern and eastern portions of the state (Wheeling, Morgantown, Clarksburg, Parkersburg) would have received a new area code.[3] However, telecommunications providers were overwhelmingly in favor of an overlay, instead of a split. Most of the state's telecommunications providers wanted to spare their northern West Virginia customers, particularly in rural areas, the burden of having to change their numbers–which would have required reprogramming of all cell phones. They were still able to ask the Commission to reconsider, or appeal to the West Virginia State Supreme Court, for an overlay instead of a split. An overlay would have had the effect of assigning a total of 15.6 million numbers to a state of just over 1.8 million people.

Over the following two weeks, numerous state and local government officials and various business interests voiced strong opposition to a split, in favor of the overlay option. Even Governor Joe Manchin voiced his support of an overlay. Several telecommunications providers then officially appealed to the Public Service Commission for an overlay, which was unanimously approved by all three commissioners on February 13, 2008. It was the first example of an entire state previously only served by a single code being overlaid. This example has since been followed by Idaho, where area code 208 was overlaid with 986 in 2017.

At one time,[when?] 932 was reserved for use as a future area code in West Virginia, but there has since been a 304-932 exchange code assigned in Charleston. In any event, West Virginia is not currently projected to need another area code in the foreseeable future.[4]

Implementation dates for permissive and mandatory ten-digit local dialing, as well as the effective date of the overlay, were announced in Neustar NANPA's Planning Letter #375, issued March 21, 2008.[5]