While all prokaryotes reproduce without the formation and fusion of gametes, mechanisms for lateral gene transfer such as conjugation, transformation and transduction can be likened to sexual reproduction in the sense of genetic recombination in meiosis.[2]

Prokaryotes (Archaea and Bacteria) reproduce asexually through binary fission, in which the parent organism divides in two to produce two genetically identical daughter organisms. Eukaryotes (such as protists and unicellular fungi) may reproduce in a functionally similar manner by mitosis; most of these are also capable of sexual reproduction.

Multiple fission at the cellular level occurs in many protists, e.g. sporozoans and algae. The nucleus of the parent cell divides several times by mitosis, producing several nuclei. The cytoplasm then separates, creating multiple daughter cells.[3][4][5] 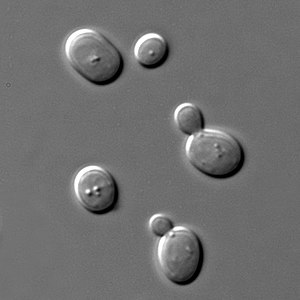 Some cells divide by budding (for example baker's yeast), resulting in a "mother" and a "daughter" cell that is initially smaller than the parent. Budding is also known on a multicellular level; an animal example is the hydra[8], which reproduces by budding. The buds grow into fully matured individuals which eventually break away from the parent organism.

Internal budding is a process of asexual reproduction, favoured by parasites such as Toxoplasma gondii. It involves an unusual process in which two (endodyogeny) or more (endopolygeny) daughter cells are produced inside a mother cell, which is then consumed by the offspring prior to their separation.[9]

Also, budding (external or internal) occurs in some worms like Taenia or Echinococcus; these worms produce cysts and then produce (invaginated or evaginated) protoscolex with budding.

Vegetative propagation is a type of asexual reproduction found in plants where new individuals are formed without the production of seeds or spores and thus without syngamy or meiosis.[10] Examples of vegetative reproduction include the formation of miniaturized plants called plantlets on specialized leaves, for example in kalanchoe (Bryophyllum daigremontianum) and many produce new plants from rhizomes or stolon (for example in strawberry). Other plants reproduce by forming bulbs or tubers (for example tulip bulbs and Dahlia tubers). Some plants produce adventitious shoots and may form a clonal colony. In these examples, all the individuals are clones, and the clonal population may cover a large area.[11]

Many multicellular organisms form spores during their biological life cycle in a process called sporogenesis. Exceptions are animals and some protists, which undergo meiosis immediately followed by fertilization. Plants and many algae on the other hand undergo sporic meiosis where meiosis leads to the formation of haploid spores rather than gametes. These spores grow into multicellular individuals (called gametophytes in the case of plants) without a fertilization event. These haploid individuals give rise to gametes through mitosis. Meiosis and gamete formation therefore occur in separate generations or "phases" of the life cycle, referred to as alternation of generations. Since sexual reproduction is often more narrowly defined as the fusion of gametes (fertilization), spore formation in plant sporophytes and algae might be considered a form of asexual reproduction (agamogenesis) despite being the result of meiosis and undergoing a reduction in ploidy. However, both events (spore formation and fertilization) are necessary to complete sexual reproduction in the plant life cycle.

Fungi and some algae can also utilize true asexual spore formation, which involves mitosis giving rise to reproductive cells called mitospores that develop into a new organism after dispersal. This method of reproduction is found for example in conidial fungi and the red algae Polysiphonia, and involves sporogenesis without meiosis. Thus the chromosome number of the spore cell is the same as that of the parent producing the spores. However, mitotic sporogenesis is an exception and most spores, such as those of plants, most Basidiomycota, and many algae, are produced by meiosis.

Fragmentation is a form of asexual reproduction where a new organism grows from a fragment of the parent. Each fragment develops into a mature, fully grown individual. Fragmentation is seen in many organisms. Animals that reproduce asexually include planarians, many annelid worms including polychaetes[12] and some oligochaetes,[13] turbellarians and sea stars. Many fungi and plants reproduce asexually. Some plants have specialized structures for reproduction via fragmentation, such as gemmae in liverworts. Most lichens, which are a symbiotic union of a fungus and photosynthetic algae or cyanobacteria, reproduce through fragmentation to ensure that new individuals contain both symbionts. These fragments can take the form of soredia, dust-like particles consisting of fungal hyphen wrapped around photobiont cells.

Clonal Fragmentation in multicellular or colonial organisms is a form of asexual reproduction or cloning where an organism is split into fragments. Each of these fragments develop into mature, fully grown individuals that are clones of the original organism. In echinoderms, this method of reproduction is usually known as fissiparity.[14] Due to many environmental and epigenetic differences, clones originating from the same ancestor might actually be genetically and epigenetically different.[15]

Agamogenesis is any form of reproduction that does not involve a male gamete. Examples are parthenogenesis and apomixis. 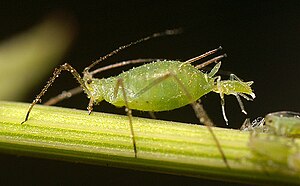 Apomixis in plants is the formation of a new sporophyte without fertilization. It is important in ferns and in flowering plants, but is very rare in other seed plants. In flowering plants, the term "apomixis" is now most often used for agamospermy, the formation of seeds without fertilization, but was once used to include vegetative reproduction. An example of an apomictic plant would be the triploid European dandelion. Apomixis mainly occurs in two forms: In gametophytic apomixis, the embryo arises from an unfertilized egg within a diploid embryo sac that was formed without completing meiosis. In nucellar embryony, the embryo is formed from the diploid nucellus tissue surrounding the embryo sac. Nucellar embryony occurs in some citrus seeds. Male apomixis can occur in rare cases, such as the Saharan Cypress Cupressus dupreziana, where the genetic material of the embryo are derived entirely from pollen.

Aphid populations are often entirely female during the summer, with sexual reproduction only to produce eggs for overwintering.

Some species can alternate between sexual and asexual strategies, an ability known as heterogamy, depending on many conditions. Alternation is observed in several rotifer species (cyclical parthenogenesis e.g. in Brachionus species) and a few types of insects, such as aphids which will, under certain conditions, produce eggs that have not gone through meiosis, thus cloning themselves. The cape bee Apis mellifera subsp. capensis can reproduce asexually through a process called thelytoky. The freshwater crustacean Daphnia reproduces by parthenogenesis in the spring to rapidly populate ponds, then switches to sexual reproduction as the intensity of competition and predation increases. Monogonont rotifers of the genus Brachionus reproduce via cyclical parthenogenesis: at low population densities females produce asexually and at higher densities a chemical cue accumulates and induces the transition to sexual reproduction. Many protists and fungi alternate between sexual and asexual reproduction. A few species of amphibians, reptiles, and birds have a similar ability.[which?]

The slime mold Dictyostelium undergoes binary fission (mitosis) as single-celled amoebae under favorable conditions. However, when conditions turn unfavorable, the cells aggregate and follow one of two different developmental pathways, depending on conditions. In the social pathway, they form a multi-cellular slug which then forms a fruiting body with asexually generated spores. In the sexual pathway, two cells fuse to form a giant cell that develops into a large cyst. When this macrocyst germinates, it releases hundreds of amoebic cells that are the product of meiotic recombination between the original two cells.[16]

The hyphae of the common mold (Rhizopus) are capable of producing both mitotic as well as meiotic spores. Many algae similarly switch between sexual and asexual reproduction.[17] A number of plants use both sexual and asexual means to produce new plants, some species alter their primary modes of reproduction from sexual to asexual under varying environmental conditions.[18]

Asexual reproduction is found in nearly half of the animal phyla.[22] Parthenogenesis occurs in the hammerhead shark[23] and the blacktip shark.[24] In both cases, the sharks had reached sexual maturity in captivity in the absence of males, and in both cases the offspring were shown to be genetically identical to the mothers. The New Mexico whiptail is another example.

Some reptiles use the ZW sex-determination system, which produces either males (with ZZ sex chromosomes) or females (with ZW or WW sex chromosomes). Until 2010, it was thought that the ZW chromosome system used by reptiles was incapable of producing viable WW offspring, but a (ZW) female boa constrictor was discovered to have produced viable female offspring with WW chromosomes.[25] The female boa could have chosen any number of male partners (and had successfully in the past) but on these occasions she reproduced asexually, creating 22 female babies with WW sex-chromosomes.

Polyembryony is a widespread form of asexual reproduction in animals, whereby the fertilized egg or a later stage of embryonic development splits to form genetically identical clones. Within animals, this phenomenon has been best studied in the parasitic Hymenoptera. In the 9-banded armadillos, this process is obligatory and usually gives rise to genetically identical quadruplets. In other mammals, monozygotic twinning has no apparent genetic basis, though its occurrence is common. There are at least 10 million identical human twins and triplets in the world today.

Bdelloid rotifers reproduce exclusively asexually, and all individuals in the class Bdelloidea are females. Asexuality evolved in these animals millions of years ago and has persisted since. There is evidence to suggest that asexual reproduction has allowed the animals to evolve new proteins through the Meselson effect that have allowed them to survive better in periods of dehydration.[26]

Molecular evidence strongly suggests that several species of the stick insect genus Timema have used only asexual (parthenogenetic) reproduction for millions of years, the longest period known for any insect.[27]

In the grass thrips genus Aptinothrips there have been several transitions to asexuality, likely due to different causes.[28]

A complete lack of sexual reproduction is relatively rare among multicellular organisms, particularly animals. It is not entirely understood why the ability to reproduce sexually is so common among them. Current hypotheses[29] suggest that asexual reproduction may have short term benefits when rapid population growth is important or in stable environments, while sexual reproduction offers a net advantage by allowing more rapid generation of genetic diversity, allowing adaptation to changing environments. Developmental constraints[30] may underlie why few animals have relinquished sexual reproduction completely in their life-cycles. Another constraint on switching from sexual to asexual reproduction would be the concomitant loss of meiosis and the protective recombinational repair of DNA damage afforded as one function of meiosis.[31][32]