From Wikiafripedia, the free encyclopedia that you can monetize your contributions or browse at zero-rating.
Unchecked
Jump to navigation Jump to search
"Baghdad Airport" redirects here. It is not to be confused with Bagdad Airport.

The present airport was developed under a consortium led by French company, Spie Batignolles, under an agreement made in 1979. The Iran/Iraq war delayed full opening of the airport until 1982. The airport at the time was opened as Saddam International Airport, bearing the name of the then Iraqi president, Saddam Hussein.[3]

Most of Baghdad's civil flights stopped in 1991, when the United Nations imposed restrictions on Iraq after the Iraqi invasion of Kuwait during the Persian Gulf War. Because of the no-fly zone imposed on Iraq by the United States and the United Kingdom, Iraqi Airways was only able to continue domestic flights for limited periods. Internationally, Baghdad was able to receive occasional charter flights carrying medicine, aid workers, and government officials. Royal Jordanian Airlines operated regular flights from Amman to Baghdad.

Inside view of the terminal in 2003, showing an abandoned and nonfunctional FIDS (note the red and white icon for the long-defunct East German airline Interflug in the fourth row from the bottom), in front of empty check-in desks and passport control

In April 2003, US-led coalition forces invaded Iraq and changed the airport's name from Saddam International Airport to Baghdad International Airport. The ICAO code for the airport consequently changed from ORBS to ORBI; the IATA code subsequently switched from SDA to BGW, which previously referred to all Baghdad airports and before that to Al Muthana Airport when Saddam was in power.

Civilian control of the airport was returned to the Iraqi Government in 2004.

Sather Air Base came under fire from periodic rocket attacks from Baghdad. On 6 December 2006 a 107 rocket attack landed 30 yards (meters) from a parked C-5A aircraft placing scores of shrapnel holes in the aircraft.

Terminal C has been refreshed with three active gate areas for carriers operating from the airport.

In January 2015, a FlyDubai jet carrying 154 passengers was struck by gunfire as it landed at the airport. One passenger was injured when at least three bullets struck the plane. After the incident, UAE carriers FlyDubai and Emirates suspended their flights from Dubai to Baghdad. Flights by Turkish Airlines and Royal Jordanian were also temporarily suspended.[4]

Baghdad Airport Road, connecting to the Green Zone, which was once a dangerous route full of IEDs, has been refurbished with palm trees, manicured lawns, and a fountain, with Turkish assistance.[5]

Within the airport there is a separate enclave called the New Al Muthana Air Base where the Iraqi Air Force's 23rd Squadron is based with three Lockheed C-130E Hercules transport aircraft.[citation needed] It is also home to a number of Sukhoi Su-25 "Frogfoot"s.[9]

Sather Air Base or Camp Sather was a United States Air Force base on the west side of the airport occupied from 2003 to 2011 during the Iraq War. It was named in memory of Combat Controller Staff Sergeant Scott Sather, the first enlisted Airman to die in Operation Iraqi Freedom. Sather was awarded the Bronze Star Medal with Valor for his leadership of a 24th Special Tactics Squadron reconnaissance task force during the initial stages of the 2003 invasion of Iraq.

On 18 May 2010, plans were unveiled for an expansion of Baghdad International Airport, which will double its capacity to 15 million passengers per year. The expansion, to be funded by foreign investors, will include the construction of three new terminals and the refurbishment of the existing three terminals, which will each accommodate 2.5 million passengers annually.[10] 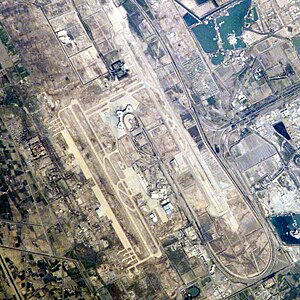