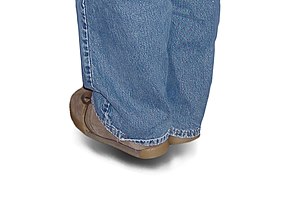 The Balducci levitation is a levitation illusion first described by Ed Balducci. Its inventor is unknown. It is an impromptu magic trick, which has been popularized by many magicians, such as David Roth, Paul Harris, and David Blaine.

Other methods of levitation allow for greater heights, longer durations, and better viewing angles (see definition of angles from List of conjuring terms) for performance; however, most of these methods can only be performed on a stage because they require special equipment or setups (such as wires). The Balducci levitation requires no preparation of any kind, and so it can be performed impromptu – anytime, anywhere. Although variations have been made to improve the illusion of genuine levitation, they are generally harder to perform, and some require gimmicks or setups that make them less practical than the Balducci levitation.

Like many magic effects, this illusion relies mostly on subtle misdirection and acting on the part of the performer.

These psychological subtleties increase the probability that spectators will believe the illusion:

The effects of these subtleties can be seen in David Blaine's television performances of this illusion. For example, one spectator is asked how high Blaine levitated. She gestures a height that is obviously a few inches higher than the illusion is capable of producing, demonstrating that subtleties can often cause a spectator's interpretation of an effect to be better than the effect itself.

The magician positions himself at an angle to his audience, a little distance away, in such a way that the audience can only see the rearward portion of one foot and most of the other foot – concealing the toe end of the "far" (upstage) foot. The audience group must be small enough that they can be grouped close together. The magician, with the rearward portion of his feet held together, lifts the "near" foot off the ground, standing on only the front part of his "far" foot (the one which is partially concealed) while lifting the rearward part of the "far" foot and all of the "near" foot and keeping his ankles together. The audience sees only one foot and the heel of the other (the "far" foot), which appear to rise off the floor. The hidden part of the "far" (upstage) foot supports the weight of the magician as he appears to levitate one or two inches.

Another variation that is sometimes shown on TV shows is done by performing a normal "Balducci", filming the audience reaction, then later returning and performing the illusion with the aid of wires to get more height or to get a shot from the front or underneath. These shots will be edited into the footage of the original performance, thus allowing the levitation effect to be exaggerated, while still using genuine onlookers in the shot.[1]

There is a principle in theatrical magic that "the audience will often remember or describe an exaggerated effect"[citation needed] – so the audience members may not notice the increased height caused by the "faked second shot" (if the additional height is not more than a few extra centimeters) when watching the combined footage later, believing that they are seeing a genuine recreation of the performance. This is even more likely if, during the original performance, cameras are positioned in the same place as those from which the "faked" footage was later shot.

Ed Balducci published the first known description of the illusion in July 1974 in The Pallbearer's Review (Volume 9, Number 9, pp 755) under the name "Impromptu Levitation". Balducci ended his description by saying, "Originator unknown. It was shown to me many years ago by one of the Harmonicats, a cousin of mine, Erwin Levine, known as the Baron."

Despite Balducci's disclaimer, the illusion has since been known as the "Balducci levitation".