From Wikiafripedia, the free encyclopedia that you can monetize your contributions or browse at zero-rating.
Unchecked
Jump to navigation Jump to search
Region in SomaliaTemplate:SHORTDESC:Region in Somalia

Benaadir (Template:Lang-so, Arabic: بنادر‎, Italian: Benadir) is an administrative region (gobol) in southeastern Somalia.[2] It covers the same area as the city of Mogadishu, Somalia's capital. It is bordered to the northwest by the Shabelle river, and to the southeast by the Somali Sea.[3] Although by far the smallest administrative region in Somalia, it has the largest population, estimated at 1,650,227 (including 369,288 internally displaced persons) in 2014.[4]

"Benaadir" is derived from the Somali banaadir, which means "coast", in reference to the southern Somali coastal cities of Mogadishu, Merka and Barawa. The place name reflects the region's medieval position as a key trade center with Persia, Arabian peninsula and far east.[5]

Its capital is Mogadishu, although the administrative region itself is coextensive with the city. Benaadir is much smaller than the historical region of Benadir, which covers most of the country's central and southern seaboard opposite the Indian Ocean and up to the Juba River, including Mogadishu.[citation needed]

Thabit M. Abdi was appointed mayor of Mogadishu and governor of Banaadir in 2017, succeeding Yusuf Hussein Jimale who held that post since November 2015.[6]

The 1,650,227 residents of Benaadir are 50.7% female and come from 303,021 households.[4] It has the highest percentage of residents who are internally displaced persons among the regions of Somalia, because of its relative safety and availability of resources.[4]

Tradition and old records assert that southern Somalia, including the Mogadishu area, was historically inhabited by hunter-gatherers. These were later joined by Cushitic-speaking agro-pastoralists, who would go on to establish local aristocracies. During its medieval Golden Age, Mogadishu was ruled by the Muzaffar dynasty, and later by the Ajuran Sultanate. This is found mainly in the Banaadiri oral traditions who are the native population. It subsequently fell under the control of an assortment of local Sultanates and polities, most notably the Sultanate of the Geledi. The sultanate of the Geledi were in an alliance with the Zanbiar Dynasty. The city later became the capital of Italian Somaliland (1889–1936) in the colonial period. When the Italians arrived in Mogadishu the city had two towns only. These towns were Xamar Weyne and Shingaani. The people who lived in these towns were known as "reer xamar" who were the original population and the people that lived outside these towns, what is modern day Hodan, Boondhere and all the districts were known as Xamar Daye. These tribes mainly included Reer Mataan sub tribes. The Xamar Daye, being nomadic people used their lands as grazing lands and used them for things such as camel herding. They sold their cattle in bulk to the reer xamar merchants, who were urban dwellers and seafarers; they in turn traded these items throughout the Indian Ocean and brought back luxury goods such as ivory. After the Somali Republic became independent in 1960, Mogadishu became known and promoted as the White Pearl of the Indian Ocean. After the ousting of the Siad Barre regime in 1991 and the ensuing Somali Civil War, various militias fought for control of the city, later to be replaced by the Islamic Courts Union in the mid-2000s. The ICU thereafter splintered into more radical groups, notably al-Shabaab, which fought the Transitional Federal Government (2004–2012) and its African Union Mission to Somalia allies. With a change in administration in late 2010, government troops and their military partners had succeeded in forcing out Al-Shabaab by August 2011. Mogadishu has subsequently experienced a period of intense reconstruction.

In 694 AD the Benadir towns of Mogadishu, Merka, Brava and Kismayo sprang into historical existence with the actual names, thanks to the enterprise of Abdul Malik bin Muriami. He placed one of his own followers as governor in each place and declared himself Sultan. These towns on the Benadir coast of the Indian Ocean share to a great extent the characteristics of Swahili culture further south: trading centres, welcoming Arab, Persian and other immigrants, evolving distinctive amalgams both of people groups and language, with tangible forms of settled government and the presence of Islam. The famous explorer Ibn Battuta gave us the best description of Mogadishu city and its Muslim society on the Horn of Africa in the tenth century.

From the tenth century settled in the region some communities of Arab and Persian traders and mixed with the local populations. The first settlers were originally from Al-Hasa (Al-Ahsa) and Sadah in Yemen.

Shamsud-Din Abu Abdalla Muhammed known as Ibn Battuta during his visit to the area on 1331 AD noted that Arabic was the language of commercial and literary people on the Benadir coast and islands. Mogadishu, the center of a thriving weaving industry known as toob benadir (specialized for the markets in Egypt and Syria),[7] together with Merca and Barawa also served as transit stops for Swahili merchants from Mombasa and Malindi and for the gold trade from Kilwa.[8] Jewish merchants from the Hormuz brought their Indian textile and fruit to the Somali coast in exchange for grain and wood,[9] 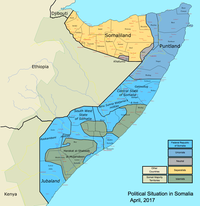 The "Banaadir" (around Mogadishu) in actual Somalia

The Portuguese reached Benadir by the end of fourteenth century. Barawa (Brava) was sacked for three days in 1499 and burned. The 1516 Portuguese Duarte defined Mogadishu as a city of black population named Magadoxo that was ruled by a sultan. Several times the Portuguese wanted to occupy the coast of Benadir without much success. The Portuguese left the region after 1698 AD.

Successively, some Somali kingdoms dominated the regional trade of Benadir, including the Ajuran kingdom, the Adal Sultanate, the Warsangali Sultanate, and the Geledi Sultanate. In the XVII century all the Benadir coast was controlled by the Oman Sultan and when this sultanate was divided in Sultanate of Musqat and Sultanate of Zanzibar after the Napoleon times, the Benadir went under Zanzibar control. Indeed, in 1861, Zanzibar and Oman were divided into two separate principalities: Sayyid Majid bin Said Al-Busaid became the Sultan of Zanzibar, while Sayyid Thuwaini bin Said al-Said, became the Sultan of Oman. The Sultan of Zanzibar controlled a large portion of the African Great Lakes Coast, known as Zanj, as well as trading routes extending much further across the continent, as far as Kindu on the Congo River, and reaching the Benadir.

The Italian penetration in the Benadir coast of Somalia began in 1885 by a commercial company (called "Compagnia del Benadir") that leased the Sultan territory of Obbia. The territory embraced between 4 degrees latitude north and the Juba river, that made border with the British East Africa, also administered by a private company. The main river was the Ueli Xebeli (Wadi Shebeli) and the major cities were Mogadishu, Merka, Brava (Barawa) and Warseij.

The (Benadir) ports management, initially done by the "Compagnia Filonardi" (1893–96) and later by the "Società Anonima Commerciale Italiana del Benadir" (1899–1905) was finally taken by the Italian government that obtained the control of the entire region through an agreement with the British government and the payment of 144,000 British Sterlings to the Zanzibar sultane (London treaty, January 1905).[10]

The Benadir colony was renamed on 16 March 1905 and became the Italian Somalia with the district Italian administration directly in Benadir, and with the protected Sultanates of Obbia (Hobyo) and Majertin (Majeerteen). In 1926 the territory of Benadir was between the "Basso Uebi-Scebeli", Mogadishu and the "Alto-Uebu Scebeli" (basically the old Sultanate).

The Italians -settling in huge numbers- italianised the capital Mogadiscio (that in 1940 was called the "White Pearl of Indian Ocean" and was practically a fully Italianised city with over 40% of inhabitants being Italians or descendants of Italians) and the 3 main cities in the Shebelle river farm area (Villabruzzi with 3000 colonists, Genale with 700 and Vittorio with 400). But little communities of Italian colonists existed also in the Benadir cities of Merca (250 Italians), Brava (150), Chisimaio (120), Baidoa (300) and Itala (50), where they lived in small areas that were the only fully modern & developed sections of these little cities.

In the 1930s the Benadir section inside the "triangle Mogadiscio-Merca-Villabruzzi" was the most developed area of "Somalia italiana", with a 114 km railway and many paved roads with the Petrella international airport and the Mogadiscio port: nearly all the Italian Somalians lived there.

In 1951 the "Basso Uebi-Scebeli" and Mogadishu were united in the District of Benadir, and as such integrated in the Republic of Somalia when obtained independence in 1960. The district existed until 1982 when it was created as the Banaadir region.

The Benaadir region consists of seventeen districts.[11] Warta Nabada District was previously known as Wardhigley District until it was officially renamed in 2012.[12] Kadha District was formed in 2013 and is still absent from most maps.[13]