Bandar Imam Khomeini is a port city on the Persian Gulf in Khūzestān Province, Iran. Before the 1979 Iranian Revolution, it was known as Bandar Shahpur. It is named after Ayatollah Ruhollah Khomeini.

The city is home to Petrochimi Bandar Imam basketball club, which plays in the Iranian Super League. 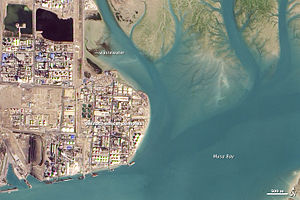 The port is located at the terminus of the Trans-Iranian Railway linking the Persian Gulf with Tehran and on to the Caspian Sea. Its is part of same nautical complex as the port of the adjacent city of Bandar-e Mahshahr. Both ports are accessible through the same channel.

During World War II it consisted only of a jetty, two shipping berths, a railhead and warehouses and a civilian settlement some miles distant.[4] The port was initially in German and Italian hands, but was stormed on August 25, 1941 by a combined British and Indian force supported by the Royal Navy.[5] A flotilla led by the armed merchant cruiser HMS Kanimbla had sailed up the waterways and in the raid captured eight Axis vessels, two gunboats and the floating dock. It was at time that, among others, the German ship Hohenfels fell into British hands and became Empire Kamal.

Thereafter it was administered by the US Army 482nd Port Battalion and served as a critical supply point for Allied military aid for Russia. The port facilities were also used for merchant and military vessel layup and repair. Three additional berths were built during the war.[4]

The port of Bandar-e Emam Khomeyni is an Iranian National port operating under the authority of the Iranian Ports & Maritime Organization.[6]it is the Iranian Northernmost port on the Persian Gulf

.The Bandar Imam[7] port is a transshipment point for containers, bulk and general cargo, with exclusive access to the facilities held by Iran Shipping Lines (IRISL). In 2005 the Iranian Government proposed direct container shipments between the port and western Europe,[8] but negotiations with shipping lines for dedicated port facilities and access have not concluded.

A dozen kilometers East of Bandar Khomeyni port is the port of Bandar-e Mahshahr which is specialized in exporting oil and petrochemical products produced by the national companies NIOC and NPC. Both ports are accessible through the same 'Khor Musa' channel, which is 42 miles long and about 20 meters deep.

Bandar-e Emam Khomeyni port is connected by rail and road, to the West with Abadan and Khorramshahr and their joint Arvand Free Zone [9], along the Iran - Iraq border line, and to the North to Ahvaz, Teheran and the Caspian Sea and the Caucasus countries.