From Wikiafripedia, the free encyclopedia that you can monetize your contributions or browse at zero-rating.
Unchecked
Jump to navigation Jump to search
For the Texas-based chain with the same name, see Bealls (Texas).

Bealls Inc. /ˈbɛlz/ is a United States retail corporation of over 500 stores founded in 1915 in Bradenton, Florida. Bealls consists of three chains, Bealls Stores, Bealls Outlet Stores, and Bunulu. Bealls Inc. serves as the parent corporation. The group is not affiliated with Bealls Texas, although the two overlap in some markets. Where there is overlap, Bealls Outlet operates as Burkes Outlet. The CEO of Bealls Inc. is Steve Knopik.[1] Bealls (FL) Stores, Inc. and Bealls Outlet Stores, Inc. are headed by Presidents Dan Love and Dave Alves,[2] respectively. They are still owned by the founding family, all are headquartered in Bradenton.[3][4]

In 1915, 22-year-old Robert M. Beall Sr. opened a dry goods store in Bradenton, Florida. Investing his entire savings in merchandise, he used empty wooden packing crates as his first display tables. Because the store sold nothing for more than one dollar he called his store The Dollar Limit. Following World War I inflation, in 1920 Beall renamed his store The Five Dollar Limit. Business prospered during the Florida land boom of the 1920s; in a few years Beall purchased a vacant lot facing the courthouse and erected a new modern department store, which opened for Christmas, 1924. The Florida boom ended in a few years, only to be followed by the stock market crash. Hard hit and unable to pay his debts, Robert Beall lost his business to the bank. He stayed on as manager through the depression. By 1944 he had saved enough to repurchase it.

After the war, Robert was joined by his son E.R. as junior partner. They christened the business Bealls Department Store. Air conditioning and an influx of new residents in the 1950s began to transform the face of Florida. In 1956, the second Bealls Department store was opened in Bradenton's Westgate Shopping Center and a third store followed in 1961 at the Venice Shopping Center in Venice, Florida. E.R. developed the new chain while his father ran the original downtown store until just prior to his death in 1979.

During the 1960s and 1970s Florida experienced amazing growth and Bealls stores grew with it. In 1980, Robert M. Beall II became president of the corporation—the third generation. E.R. became Chairman of the Board. By 1981 the chain had 23 stores. A year later, seven new stores enabled the chain to double its selling space. Bealls continued to grow into new communities and adopt new technologies, introducing in-store kiosks and launching http://www.beallsflorida.com in 1998. Striving to deliver the right merchandise for Florida customers, Bealls opened its own design studio in 2004. Lines exclusive to Bealls include Reel Legends, Coral Bay, and Leoma Lovegrove. 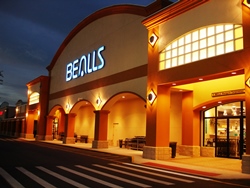 E.R. Beall having observed the growth of outlet stores in North Carolina, Bealls ventured into the off-price channel in 1987. After a few hits and misses, Bealls Outlet caught on rapidly.[5] A new buying organization was created, constantly shopping the markets for great finds. In 1992, Bealls opened its first out-of-Florida Outlet in Arizona, and soon expanded to Georgia. Today Bealls Outlet numbers more than 420 stores in 16 states across the Sunbelt under the names of Bealls Outlet and Burkes Outlet. The Burkes Outlet name is used in Alabama, Arkansas, Kentucky, Louisiana, Mississippi, Nevada, New Mexico, North Carolina, West Virginia, Virginia, South Carolina, Tennessee, and Texas. Online outlet shopping began with the debut of http://www.Burkesoutlet.com in 2014. Bealls and Burkes Outlet stores follow a deep discount every day low price policy with an emphasis on branded merchandise.[1]

Bunulu is an upscale specialty store launched at Coconut Point, Estero FL, in August 2015.[6] The origin of the name is from an aboriginal Australian word for "place of water". Bunulu is devoted to casual outdoor lifestyles with an emphasis on coastal living. There are currently three stores located in Estero, Jacksonville, and Palm Beach Gardens, FL.

Following the sale of the old downtown store, the proceeds were used to establish a charitable foundation named for the founder.[8] Since then the foundation has provided scholarships to over 600 employees and their dependents. Bealls is a longtime contributor to the United Way and to agencies that help young people and education. In celebration of its centennial year, company outreach assisted Habitat for Humanity and the American Cancer Society; Bealls also sponsors Take Stock in Children, helping to mentor at-risk children throughout Florida.