From Wikiafripedia, the free encyclopedia that you can monetize your contributions or browse at zero-rating.
Unchecked
Jump to navigation Jump to search
This is a Chinese name; the family name is Tai.

Benny Tai Yiu-ting, MH[1] (Chinese: 戴耀廷; born 12 July 1964) is a Hong Kong legal scholar and democracy activist. He is an Associate Professor of Law at the University of Hong Kong and is known for his initiation of the Occupy Central with Love and Peace, a non-violent civil disobedience campaign to pressure the Hong Kong government to implement full democracy in 2014, which turned into the massive pro-democracy protests.

After the protests, he also launched the "Operation ThunderGo" in the 2016 Legislative Council election, a "smart voter" mechanism aiming at getting the most pro-democracy candidates elected to the Legislative Council. He also initiated "Project Storm" for the pro-democrats to win the majority in the coming 2019 District Council election. In March 2018, he received all-round attacks from the Beijing and Hong Kong governments, the pro-Beijing media and politicians for his remarks on Hong Kong independence.

Tai was educated at the Diocesan Boys' School before he graduated from the University of Hong Kong with Bachelor of Laws and Postgraduate Certificate in Laws and obtained a Master of Laws from the London School of Economics and Political Science.[5]

He joined the Faculty of Law of the University of Hong Kong in 1990. He became an Assistant Professor in 1991 and an Associate Professor in 2001. He was also the Associate Dean of the law faculty from 2000 to 2008.[5] He specialised in constitutional law, administrative law, law and governance, law and politics and law and religion.[6]

He has also been active in promoting civic education in the community. He served on the Hong Kong Basic Law Consultative Committee as a student representative from 1988 to 1990 and was a member of the Committee on the Promotion of Civil Education and the Bilingual Laws Advisory Committee from 1995 to 2003. He was also a part-time member of the Hong Kong government's Central Policy Unit in 2007.[6]

On 16 January 2013, Tai wrote an article entitled "Civil Disobedience's Deadliest Weapon" on Hong Kong Economic Journal which sparked public debate. In the article, Tai postulated a non-violent civil disobedience seven-step progression to pressure the Hong Kong government to implement genuine full democracy: 10,000 participants signing a declaration (taking a vow and pledge of willingness to occupy the streets), live TV broadcast of discussions, electronic voting on methods for universal suffrage, a referendum on the preferred formula, resignation of a "super-seat" Legislative Council member to be filled in a by-election to be seen as a referendum on the plan, civil disobedience, and, finally, Occupy Central in July 2014 if the plan was rejected by the Beijing government.[7]

He and sociology scholar Dr. Chan Kin-man and pro-democracy priest Reverend Chu Yiu-ming founded the Occupy Central with Love and Peace (OCLP) on 27 March 2013.[8] The plan was supported by the pan-democracy camp and rounds of deliberations were held among the Occupy participants from 2013 to 2014 before an referendum on the electoral reform proposal in June 2014.[9] The plan was strongly condemned by the Beijing authorities, accusing Tai and other organisers were "a small minority of extremists" suggesting the Occupy plan with "ulterior motive" lay in "interference from foreign forces" in a publication of the state-owned Global Times.[10][11] He also received death threats.[12]

In response to the decision on constitutional reform proposal of the National People's Congress Standing Committee (NPCSC) which set the restrictive framework on the electoral method of the 2017 Chief Executive election, Tai announced the official start of the Occupy Central with Love and Peace civil disobedience campaign on 28 September 2014 after the student activists' storming of the forecourt of the government headquarters led by Joshua Wong on the last day of the class boycott campaign.[13]

As the occupation ended its first month, Benny Tai and Chan Kin-man resumed their teaching duties at their respective universities and OCLP handed over the command of its medic, marshal and supplies teams to the student groups, the Hong Kong Federation of Students and Scholarism.[14][15] On 3 December 2014, the Occupy Central trio, along with 62 others key figures turned themselves in to the police, admitting taking part in an unauthorised assembly as originally planned.[16] They did so to fulfil their promise to bear legal responsibility and uphold the rule of law, as well as to affirm their principles of love and peace.[17]

In early 2016, Tai mapped out an "Operation ThunderGo" for pan-democrats to grab half of the seats in the Legislative Council election to increase political leverage in future political reform in the response to the increasing fragmentation of the pan-democracy camp in the post-Occupy era. He suggests the anti-establishment forces to field no more than 23 lists if their goal was to win 23 seats in the geographical constituencies.[21] For the functional constituencies, Tai suggested that besides retaining the current six trade-based functional constituencies and three territory-wide directly elected District Council (Second) super seats, the camp needs to target three additional seats in Medical, Engineering and Architectural, Surveying, Planning and Landscape.[21] The plan met with reservations from the very diverse interests within pro-democracy political parties, who could not agree on a united front. Tai's plan hit its setback when the Neo Democrats decided not to support the proposed coordinating mechanism for the District Council (Second) super seats in May.[21][22]

Tai also worked on a "smart voters" system involving 25,000 voters who would indicate their preferences on an interactive poll and would be informed of the popularity of candidates according to polls the day before the official vote and which would be updated through exit polling two and a half hours before polls closed. Such "smart voters" would delay voting until 8pm and then be signalled to support candidates whose numbers were weaker instead wasting votes on stronger candidates who were already through.[23]

Tai's Operation ThunderGo was blamed as he released on the election day a list of recommended pro-democratic candidates based on pre-polling. It drew a large number of voters to vote for the candidates who were on the brink of losing as shown in the polls from other candidates, which resulted in the high votes received by fresh faces Eddie Chu, Lau Siu-lai and Nathan Law at other veteran democrats' expenses including Lee Cheuk-yan, Cyd Ho and Frederick Fung who failed to retain their seats.[24] 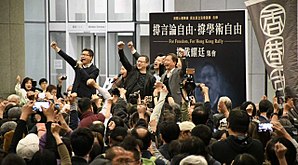 For Freedom, For Hong Kong Rally to support Benny Tai in response to the pro-Beijing attacks in April 2018.

In a seminar in Taipei organised by the Taiwan Youth Anti-Communist Corps in March 2018, Tai was recorded making an argument that following the end of "dictatorship" in China, the country’s various ethnic groups could exercise their right to self-determination and decide how they could link up with each other. "We could consider going independent, being part of a federal system or a confederation system similar to that of the European Union," he said.[25]

Tai was condemned by Beijing’s mouthpieces in Hong Kong for several days in a row, followed by a rare statement of condemnation from the Hong Kong government.[25] The Hong Kong and Macau Affairs Office (HKMAO) and the Liaison Office also issued strongly worded comments condemning Tai, stating that a "small number of people in Hong Kong have colluded with external separatist forces" to advocate the city’s independence. "They have fully exposed their attempts to split the country and violated the national constitution, the Hong Kong Basic Law, and the relevant laws in Hong Kong. They are challenging the bottom line of 'one country, two systems'. Such activities must not be ignored or tolerated." Hong Kong member of the National People's Congress Standing Committee (NPCSC) Tam Yiu-chung urged Hong Kong to urgently implement Article 23 of the Basic Law to criminalise a series of acts including sedition, treason and subversion. He also asked if it was still appropriate for him to keep his job at HKU. All pro-Beijing legislators also issued a joint statement against the national constitution and the Basic Law. Several pro-Beijing protesters staged a protest outside the University of Hong Kong's law faculty building urging management to sack Tai.[26]

Tai responded by saying his comments were "imaginations of the future", which in his opinion did not violate any criminal laws. He also added that he does not support independence.[27] He warned of a "Cultural Revolution-style denouncement could have started against me. It will quickly spread to affect all Hong Kong people."[28] He expressed his fears for his personal safety as he suspected that he was being followed by officers from "powerful" mainland agencies who may be posing as journalists, and that the police were unable to help him.[29]

In April 2017, Tai proposed the "Project Storm" to win the majority of the District Council seats for the pro-democrats in the next election in 2019. He stated that by winning a majority of the some 400 District Council seats, pro-democrats could gain an additional 117 seats of the District Council subsectors on the 1,200-member Election Committee which elects the Chief Executive. Tai believed that by making it harder for Beijing to manipulate in the Chief Executive election, it would compel Beijing to restart the stalled political reform after its restrictive proposal was voted down in 2015.[30]

Benny Tai is married with one daughter and two sons. He is a Christian who considers himself a "part-time theologian", and said he could write a thesis on the topic of Christianity and the Occupy protests. He stated that his political views were inspired by his Christian faith, adding that the movement was guided by another Christian leader, the Reverend Martin Luther King Jr..[31]