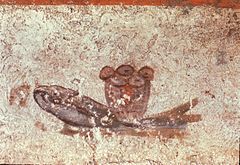 The Bread of Life Discourse is a portion of the teaching of Jesus which appears in the Gospel of John 6:22-59 and was delivered in the synagogue at Capernaum.[1]

The title "Bread of Life" (Ancient Greek: ἄρτος τῆς ζωῆς, artos tēs zōēs) given to Jesus is based on this Biblical passage which is set in the Gospel of John shortly after the feeding the multitude episode (in which Jesus feeds a crowd of 5000 people with five loaves of bread and two fish), after which He walks on the water to the western side of Sea of Galilee and the crowd follow by boat in search of Him.[2]

In the Gospel of John:

Jesus said to them, "Very truly, I tell you, it was not Moses who gave you the bread from heaven, but it is my Father who gives you the true bread from heaven. For the bread of God is that which comes down from heaven and gives life to the world." They said to him, "Sir, give us this bread always." Jesus said to them, "I am the bread of life. Whoever comes to me will never be hungry, and whoever believes in me will never be thirsty." (John 6:32-35, New Revised Standard Version)[3]

John's Gospel does not include an account of the blessing of the bread during the Last Supper as in the synoptic gospels e.g. Luke 22:19. Nonetheless, this discourse has often been interpreted as communicating teachings regarding the Eucharist that have been very influential in the Christian tradition.[4]

Meredith J. C. Warren and Jan Heilmann have challenged the Eucharistic interpretation of this passage. Warren argues that it reflects ancient Mediterranean traditions of sacrificial meals that identify a hero with a divinity.[5] Heilmann argues that the imagery of eating the flesh of Jesus and drinking his blood is to be understood against the background of the conceptual metaphor.[6]

In the Christological context, the use of the Bread of Life title is similar to the Light of the World title in John 8:12 where Jesus states: "I am the light of the world: he who follows me shall not walk in darkness, but shall have the light of life."[7] These assertions build on the Christological theme of John 5:26 where Jesus claims to possess life just as the Father does and provides it to those who follow him.[7][8] In John 6:33 the alternative wording, "bread of God" appears.[3]