From Wikiafripedia, the free encyclopedia that you can monetize your contributions or browse at zero-rating.
Unchecked
Jump to navigation Jump to search
"Break up" redirects here. For other uses, see Break Up. 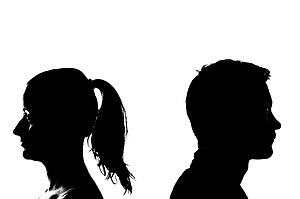 A relationship breakup, or simply just breakup,[1] is the termination of an intimate relationship by any means other than death. The act is commonly termed "dumping [someone]" in slang when it is initiated by one partner.[citation needed] The term is less likely to be applied to a married couple, where a breakup is typically called a separation or divorce. When a couple engaged to be married breaks up, it is typically called a "broken engagement".

Susie Orbach (1992) has argued that the dissolution of dating and cohabiting relationships can be as painful as or more painful than divorce because these nonmarital relationships are less socially recognized.[2]

Kamiar-K. Rueckert argues with the works of Donald Winnicott that the ability to be alone is an essentially healthy sign of emotional development and maturity. Once a child has obtained closeness and attachment by his early caregivers, he or she is able to develop autonomy and identity. If children have not introjected the good and protective qualities of their parents, they will fear separation and break-ups.[3]

Several psychological models have been proposed to explain the process of a relationship breakup, many suggesting that relationship dissolution occurs in stages.[4]

L. Lee[5] proposes that there are five stages ultimately leading up to a breakup.

Cycle of a breakup[edit source | edit]

Factors that predict a breakup before marriage[edit source | edit]

Gottman and Levenson (1994) outline the Cascade Model of Relational Dissolution, in which four negative nonverbal behaviors lead to the breakdown of a marriage/relationship:[8]

In 1976, sociologist Diane Vaughan proposed an "uncoupling theory," where there exists a "turning point" in the dynamics of relationship breakup – 'a precise moment when they "knew the relationship was over," when "everything went dead inside"' – followed by a transition period in which one partner unconsciously knows the relationship is going to end, but holds on to it for an extended period, even for years.[9][10]

Vaughan considered that the process of breakup was asymmetrical for initiator and respondent: the former 'has begun mourning the loss of the relationship and has undertaken something tantamount to a rehearsal, mentally and, to varying degrees, experientially, of a life apart from the partner'.[11] The latter then has to play catch-up: 'to make their own transition out of the relationship, partners must redefine initiator and relationship negatively, legitimating the dissolution'.[12]

As a result, for Vaughan 'getting out of a relationship includes a redefinition of self at several levels: in the private thoughts of the individual, between partners, and in the larger social context in which the relationship exists'.[13] She considered that 'uncoupling is complete when the partners have defined themselves and are defined by others as separate and independent of each other – when being partners is no longer a major source of identity'.[13]

Katherine Woodward Thomas, a licensed marriage and family therapist, originated the term "conscious uncoupling" in 2009. Thomas began teaching this new approach to divorce to students throughout the world.[14]

The term received popularization by Gwyneth Paltrow, who used the phrase to describe her divorce with Chris Martin.[15] Paltrow had her doctors Habib Sadeghi and his wife and Dr. Sherry Sami, explain the Conscious Uncoupling when she first made the news of her divorce public. A "conscious uncoupling is the ability to understand that every irritation and argument [within a marriage] was a signal to look inside ourselves and identify a negative internal object that needed healing," Habib Sadeghi explained. "From this perspective, there are no bad guys, just two people, it's about people as individuals, not just the relationship".[16]

Breakups are extremely stressful, unpleasant, and traumatic events, regardless of whether the individual in question is the one who actively made the decision to end the relationship.[17][18] Both parties feel a large number of negative effects as a result of the relationship's dissolution, and these events often gain the reputation for being some of the worst events in people's lives.[19][20] These include psychological distress symptoms, grief reactions, an overall decline of psychological well-being, and potential stalking behaviors. Individuals often work hard to keep their relationships intact because of how significantly distressing and problematic these negative effects can be, even in the face of potential complications in their relationship, for as long as they can bear it.[17] While the negative symptoms observed may not necessarily fit the definitions of post-traumatic stress as described by the DSM-IV from the American Psychiatric Association, there are some certain symptoms that mirror those from extreme traumatic events and disasters in a person's life.[21] However, not all individuals are exposed to the same level of impact following a breakup, as a result of several mitigating factors based on the quality of the relationship before the dissolution takes place.

Individuals who had just recently experienced the dissolution of a romantic relationship reported several symptoms of acute psychological distress. These included flashback and intrusive memories associated with their partner, often triggered by important dates associated with either the relationship or the breakup.[21] These intrusive distress symptoms manifested in various ways for both the individual who initiated the breakup and their partner, such as being reminded of certain aspects of their behavior or their preferences.

Another set of psychological distress symptoms that were reported by individuals who had experienced a romantic relationship breakup fell under the category of avoidance behavior.[21][22] Being without their partner causes their self-concept to shift as they struggle through emotional distress.[23] This involves an active attempt at denying or ignoring the circumstances of the current situation, or those that led to the dissolution of the relationship. In relation to this, individuals also noted feeling numb and uninterested with the world around them because of the breakup.[21]

The combination of this desire to engage in avoidance behaviors and the intrusive memories that may naturally come up cause individuals to feel significant emotional swings and outbursts in the form of irritation, anger, and startle responses. Individuals were noted as being far more paranoid, suspicious, and jealous, often tied towards a desire to know information about their ex-partner.[21][22]

Overall, these psychological distress symptoms come together to result in a significantly lower level of self-esteem among individuals who have just undergone the dissolution of a romantic relationship.[21] Additionally, individuals undergo a significant redefinition of their self-concept, as they attempt to understand who they are without their ex-partner.[23] This compounds upon the psychological distress symptoms that they feel from the loss of the relationship and is the most significant negative effect that people undergoing a breakup experience.

A natural effect of the loss of a relationship that an individual had hoped to keep is grief, because the desire to keep relationships intact despite problems and complications is a natural human desire.[17] This results in individuals undergoing a breakup displaying grief reactions that include symptoms like sleeplessness, depression, and suicidal thoughts.[18][21][22][24] This tendency to express grief and depression is so prevalent that researchers point to it being a significant contributor to the first onset of major depressive disorder in young adults.[19][23]

The extent of these grief reactions is not limited to the time frame immediately following the dissolution of the romantic relationship. Even some time after the breakup, people who are asked to recall depressing or negative events in their lives commonly make reference to traumatic events of this nature.[17] This negative effect can be attributed to the severity of the grief reaction that people who suffer through a breakup display, making a significant mark in their lives that they are unlikely to forget.

In addition to these specific negative effects, individuals who are suffering through a breakup report a general decline in their psychological well-being. The general negative emotion that they feel often triggers other behaviors and habits that are either detrimental to their mental health or signify poor mental health conditions.[21] These include:

A behavior that has been noticed following some breakups is the prevalence of stalking as one partner attempts to maintain unwanted contact from another. This type of behavior exists on a scale that stretches from an amicable breakup with no unwanted harassment behaviors all the way to stalking behaviors that are threatening and distressful to the partner.[25] This behavior stems from an unhappiness with the circumstances following the dissolution of the relationship, as well as a misguided belief that the stalking behavior may result in the reforming of the relationship. This is partly due to the observation that there is no clear definition of stalking behavior that differentiate it from socially acceptable activities, instead focusing on the persistent and unwanted nature of the acts being committed by the individual.[25]

Evidence shows that even in the direst of situations, there is a chance for positive emotions and growth.[22] Breakups are no different, giving victims opportunities for stress-related growth, improving their performance in future relationships, and providing feelings of relief and freedom.

Individuals that are placed under stressful situations are often faced with an opportunity for growth and development as a result of this stress. Without this push to improve, individuals are often pushed towards complacency and refuse to make the necessary efforts to progress through life. Different ways in which people have exhibited growth following a stressful life event include improvements to the way a person views themselves, the way they connect with other people around them, or their overall approach to life. Research shows that breakups are highly representative of this type of stressful situation, as individuals experience them several times throughout their lives and have been known to self-report instances of growth because of the experience.[19]

Another positive outcome that has been observed to follow breakup has to do with the lessons that people may have learned from going through the painful experience. The stress-related growth that a person is forced to experience following a breakup causes improvements to their overall character, self-image, and ability to interact with others. These improvements have the potential to improve the quality of future romantic relationships with other people.[19] This is due to the increased level of maturity displayed by the individual as well as, to a lesser extent, insight into certain things that they must avoid in a relationship to ensure satisfaction from their partners.

While this may not necessarily be a universal positive consequence that affects all people going through a breakup, there is significant evidence towards certain individuals experiencing feelings of relief, freedom, and happiness following the end of a relationship.[26] There is a high likelihood that these individuals were the one who initiated the breakup in the first place, but research has shown that there have been cases where individuals that have been victims of a breakup recognize that their past relationship was sub-optimal, which allows them to display the same emotions of relief, freedom, and happiness.

While individuals that have experienced a breakup are likely to experience a number of different positive and negative effects once the relationship has run its course, different people can be expect these to manifest in varying degrees. This is because there are several mitigating factors that can either minimize or amplify the extent to which one feels the consequences of a breakup. The list of potential factors that have been shown to moderate the effects that an individual might feel are categorized and listed below:[17][20][21][22][24][25][26][27]