Brent Scowcroft (/ˈskoʊkrɒft/; March 19, 1925 – August 6, 2020) was a United States Air Force officer who was a two-time United States National Security Advisor, first under U.S. President Gerald Ford and then under George H. W. Bush. He served as Military Assistant to President Richard Nixon and as Deputy Assistant to the President for National Security Affairs in the Nixon and Ford administrations. He served as Chairman of the President's Foreign Intelligence Advisory Board under President George W. Bush from 2001 to 2005 and assisted President Barack Obama in choosing his national security team.

Lieutenant Brent Scowcroft (seated second from left) during his early pilot training days with other members of the 82nd Squadron at Grenier Airfield in 1948.

Scowcroft was born March 19, 1925, in Ogden, Utah, the son of Lucile (née Ballantyne) and James Scowcroft, a grocer and business owner.[1] He was a descendant of early 19th-century British immigrants from England and Scotland, along with immigrants from Denmark and Norway. He elaborated upon his relationship with The Church of Jesus Christ of Latter-day Saints in a 1999 oral history: "I have close personal ties to some of the church leadership. They would not consider me a good Mormon. I don’t live by all of the rules the Mormons like—I like a glass of wine and a cup of coffee. But yes, I do consider myself a Mormon. It’s part of a religious and a cultural heritage."[2]

Scowcroft received his undergraduate degree and commission in the United States Army Air Forces from the United States Military Academy at West Point, New York, in June 1947. With the establishment of an independent United States Air Force in September 1947, his commission transferred to USAF. Scowcroft subsequently earned an M.A. (1953) and Ph.D. (1967) in international relations from Columbia University.[3] 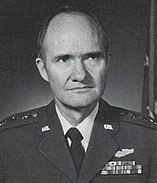 Brent Scowcroft upon receiving his third-star as Lieutenant General on August 17, 1974

Deputy Assistant For National Security Affairs Brent Scowcroft discusses the Vietnam War with Vice President Nelson A. Rockefeller and Central Intelligence Agency Director William Colby during a break in a meeting of the National Security Council in April 1975.

Having envisioned life as a fighter pilot following World War II, Scowcroft completed his pilot training in October 1948 following his commissioning as an Air Force Second Lieutenant in 1947 and received his Air Force Command Pilot Wings.[4] However, on January 6, 1949, while on flight training with North American P-51 Mustang, his P-51 Mustang aircraft experienced engine trouble after taking-off from Grenier Army Airfield, causing the plane to crash-land. Although his injuries were not critical and he was still able to continue his career as an Air Force Pilot, Scowcroft assumed that he would never fly again and considered another career within the Air Force.[4] Scowcroft served in a variety of operational and administrative positions from 1948 to 1953. In the course of his military career, he held positions at the Joint Chiefs of Staff, headquarters of the United States Air Force, and the Office of the Assistant Secretary of Defense for International Security Affairs. His other assignments included; faculty positions at the United States Air Force Academy and the United States Military Academy, and Assistant Air Attaché in the American Embassy in Belgrade, Yugoslavia.[4]

As a senior officer, General Scowcroft was assigned to Headquarters U.S.A. Air Force in the office of the Deputy Chief of Staff, Plans and Operations, and served in the Long Range Planning Division, Directorate of Doctrine, Concepts and Objectives from 1964 to 1966. He next attended the National War College at Fort McNair, followed by assignment in July 1968 to the Office of the Assistant Secretary of Defense for International Security Affairs. In September 1969, he was reassigned to Headquarters U.S. Air Force in the Directorate of Plans as Deputy Assistant for National Security Council Matters. In March 1970 he joined the Joint Chiefs of Staff organization and became the Special Assistant to the Director of the Joint Staff.[5] 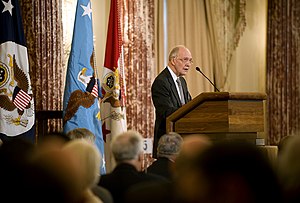 Scowcroft in October 2009, at the U.S. State Department in Washington, D.C.

Scowcroft was appointed Military Assistant to the President in February 1972 and in January 1973 was reassigned as Deputy Assistant to the President for National Security Affairs.[6] He was promoted to Lieutenant General on August 16, 1974 and retired from active duty at that rank on December 1, 1975. He had, just a month earlier, during the Halloween Massacre, become the United States National Security Advisor (for him, the first time), replacing Henry Kissinger.[7][8] Scowcroft's continued service in the Air Force would have been contingent on reconfirmation of his rank by the Senate, a distinction that National Security Advisor H. R. McMaster elected to pursue in 2018.[9]

His military decorations and awards included the Air Force Distinguished Service Medal, the Legion of Merit with oak leaf cluster and the Air Force Commendation Medal.[10]

Before joining the Bush administration, Scowcroft was Vice Chairman of Kissinger Associates. He had a long association with Henry Kissinger, having served as his assistant when Kissinger was the National Security Adviser under Richard Nixon, from 1969.[11]

On the morning of September 11, 2001, Scowcroft was in an E-4B aircraft, also known as the National Airborne Operations Command Center (NAOC), on the tarmac waiting to takeoff and fly to Offutt Air Force Base, when the first hijacked airliner hit the World Trade Center (WTC). Scowcroft's aircraft was en route to Offutt when the second hijacked airliner struck the WTC and Scowcroft was involved in observing the command and control operations of both President George W. Bush in Florida and Vice President Dick Cheney, who was at the White House.[13]

Scowcroft was the founder and president of The Forum for International Policy, a think tank. Scowcroft was also president of The Scowcroft Group, an international business consulting firm. He was co-chair, along with Joseph Nye, of the Aspen Strategy Group. He was a member of the Inter-American Dialogue, Trilateral Commission, and the Council on Foreign Relations and a board member of the Center for Strategic and International Studies and the Atlantic Council.[14]

Scowcroft was a leading Republican critic of American policy towards Iraq before and after the 2003 invasion, which war critics in particular have seen as significant given Scowcroft's close ties to former President George H.W. Bush.[15][16][17][18] Despite his public criticism of the decision to invade, Scowcroft continued to describe himself as "a friend" of the Bush administration.[19] He also strongly opposed a precipitous withdrawal, arguing that a pull-out from Iraq before the country was able to govern, sustain, and defend itself "would be a strategic defeat for American interests, with potentially catastrophic consequences both in the region and beyond."[20] He backed the invasion of Afghanistan as a "direct response" to terrorism.[21]

President George H.W. Bush presented him with the Presidential Medal of Freedom in 1991. In 1993, he was created an Honorary Knight Commander of the Order of the British Empire by Queen Elizabeth II at Buckingham Palace. In 2005, Scowcroft was awarded the William Oliver Baker Award by the Intelligence and National Security Alliance.[22]

In 1998, he co-wrote A World Transformed with George H.W. Bush. This book described what it was like to be in the White House during the end of the Cold War, as the Soviet Union collapsed in the early 1990s. Notably, both figures explained why they didn't go on to Baghdad in 1991: "Had we gone the invasion route, the United States could conceivably still be an occupying power in a bitterly hostile land."[23]

His discussions of foreign policy with Zbigniew Brzezinski, led by journalist David Ignatius, were published in a 2008 book titled America and the World: Conversations on the Future of American Foreign Policy.[24]

Scowcroft was a member of the Honorary Council of Advisors for U.S.-Azerbaijan Chamber of Commerce (USACC).[25] Critics have suggested that Scowcroft was unethical in his lobbying for the Turkish and Azeri governments because of his ties to Lockheed Martin and other defense contractors that do significant business with Turkey.[26] He was also a member of the board of directors of the International Republican Institute,[27] and served on the Advisory Board for Columbia University's School of International and Public Affairs[28] and for America Abroad Media.[29]

Scowcroft endorsed Hillary Clinton in the run-up for the 2016 U.S. presidential election.[30]

Scholarly evaluations of Scowcroft's performance have been generally favorable. For example Ivo Daalder and I. M. Destler quoting other scholars, conclude:

"Brent Scowcroft was in many ways the ideal national security adviser—indeed, he offers a model for how the job should be done." His "winning formula" consisted of gaining the trust of the key principals of U.S. foreign policymaking, establishing "a cooperative policy process at all levels," one both transparent and collegial, and keeping an "unbreakable relationship with the president," thanks to their close friendship and mutual respect. The result was that Scowcroft "proved to be an extraordinarily effective national security adviser" in comparison with others who have held the office, particularly in light of the difficult and transformative period in which he held office.[31]

Scowcroft was the inspiration and namesake for a special presidential award begun under the George H. W. Bush administration. According to Robert Gates, the award is given to the official "who most ostentatiously falls asleep in a meeting with the president." According to Gates, the president "evaluated candidates on three criteria. First, duration—how long did they sleep? Second, the depth of the sleep. Snoring always got you extra points. And third, the quality of recovery. Did one just quietly open one's eyes and return to the meeting, or did you jolt awake and maybe spill something hot in the process?"[32] According to Bush himself, the award "gives extra points for he/she who totally craters, eyes tightly closed, in the midst of meetings, but in fairness a lot of credit is given for sleeping soundly while all about you are doing their thing."[33] Scowcroft had gained a reputation for doing such things to the extent that it became a running gag.[34]

Scowcroft married Marian Horner in 1951. His wife, a Pennsylvania native, trained as a nurse at St. Francis School of Nursing in Pittsburgh and graduated from Columbia University. They had one daughter, Karen Scowcroft. Marian Horner Scowcroft, a diabetic, died on July 17, 1995, at George Washington University Hospital.[35] In March 1993, when Scowcroft was awarded by Queen Elizabeth with an Honorary KBE, his daughter was also received by the Queen.[36]