The British National (Overseas) passport, commonly referred to as the BN(O) passport, is a British passport for persons with British National (Overseas) (BN(O)) status. The passport was first issued in 1987 after the Hong Kong Act 1985[1], from which this new class of British nationality was created. Holders of BN(O) passports are permanent residents of Hong Kong who were British Dependent Territories citizens until 30 June 1997 and had registered as BN(O)s. On 1 July 2020, it was announced that plans to grant BN(O) passport holders limited leave to remain allowing them to work or study in the UK for 5 years, and then apply for settled status after that. The holders can then apply for citizenship after 12 more months.[2] This came as a result of the imposition on Hong Kong, by the Chinese central government, of the controversial national security law. This is something the UK considers a violation of the principle of 'One country, two systems' as set out by the Sino-British Joint Declaration of 1984, an internationally binding treaty.[3]

The holder's page is identical to the identification page of British Citizen passports with the nationality being indicated as British National (Overseas). The machine-readable zone starts with P<GBR, indicating the United Kingdom of Great Britain and Northern Ireland as the passport's issuing country.[4] The request page, made in the name of the 'Secretary of State' (currently the Secretary of State for Foreign and Commonwealth Affairs), is also identical to that of a British Citizen passport. The nationality on the machine readable zone, however, is GBN rather than GBR.

Each biometric BN(O) passport contains a contactless chip, which stores digital data and includes the holder's personal data, on the Endorsement page.[5]

Since the start of registration for the British National (Overseas) nationality on 1 July 1987, permanent residents of Hong Kong who were British Dependent Territories Citizens could either remain as BDTCs or register for the new type of nationality. People who chose to remain as BDTCs, however, would only be able to renew their BDTC passports for a restricted validity until 30 June 1997, while those who registered as BN(O)s would receive BN(O) passports valid for a full ten years.

Registration for the BN(O) passports was not regarded as a popular, practical option during the early years (e.g. from 1 July 1987 to 21 December 1989, only 15% of newly issued passports were of the BN(O) type; the majority still held the British Dependent Territories Citizen passports). Permanent residents of Hong Kong had until 30 June 1997 to voluntarily register themselves as a British National (Overseas).

After the transfer of sovereignty of Hong Kong[edit source | edit]

After the transfer of sovereignty of Hong Kong to the People's Republic of China on 1 July 1997, the British National (Overseas) passport became the most popular travel document among the people of Hong Kong. From April 1997 to the end of 2006, the British government has issued a total of 794,457 BN(O) passports. The peak was reached in 2001, when 170,000 were issued in a single year.

Hong Kong permanent residents who are Chinese nationals can also opt for the Hong Kong SAR passport. By 2015, the less-expensive Hong Kong SAR passport has been granted visa-free access to more than 150 countries and territories. This makes the number of visa-free countries of the BN(O) passport comparatively smaller. As a result, only 30,000 BN(O) passports were issued in 2006 against an expectation of a peak in passport renewals.

As British National (Overseas) cannot be passed through jus sanguinis to children of current BN(O)s, any children born on or after 1 July 1997 to parents with British National (Overseas) status only acquired either Chinese nationality or British Overseas Citizen status on birth (although it is possible for a BOC with no other nationalities to be registered as a British citizen). Any British Dependent Territory Citizens with connections to Hong Kong who had failed to register themselves as British Nationals (Overseas) by the end of 30 June 1997 would also be ineligible to make further claims for BN(O) from 1 July 1997, and those people would either become Chinese nationals or British Overseas Citizens.

Based on existing restrictions, the number of British National (Overseas) passports in circulation, therefore, would continue to decline over the next decades, and will, at some point in the future, fall to zero, as current passport holders pass away. 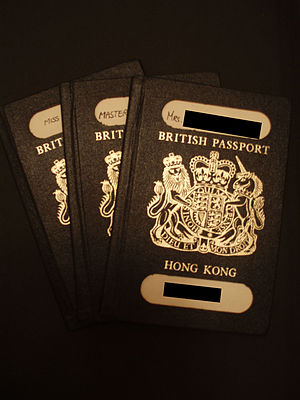 Three black British (Hong Kong) passports (British Dependent Territories) issued prior to its replacement by the machine-readable passports in 1990.

The cover of British National (Overseas) passport was originally navy blue, as in all other types of British passport. Earlier, residents of Hong Kong were Citizen of the United Kingdom and Colonies and their relevant passports bore the texts 'British Passport' at the top and 'Hong Kong' at the bottom of the cover. 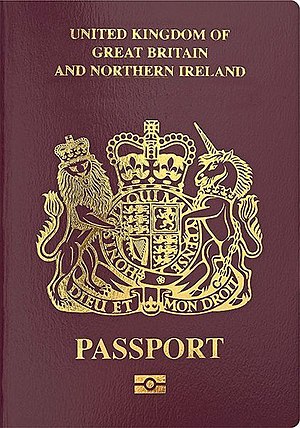 BN(O) passports sported a burgundy red cover, identical to that of the British Citizen passports, albeit without the words "European Union" text at the top part of the cover between 1990 and March 2020.

When machine-readable passports were introduced on 1 June 1990, the cover colour was changed to burgundy. Between 1990 and March 2020, all BN(O) passports sported a burgundy red cover identical to that of the British Citizen passports, albeit without the words "European Union" text at the top part of the cover. These words were featured in the latter until April 2019, when the words were removed, causing their front covers to become identical in appearance to those of BN(O) passports, British Overseas Citizen, British Protected Person and British Subject passports: the text United Kingdom of Great Britain and Northern Ireland above the coat of arms of the United Kingdom; the word Passport printed below the coat of arms, and the "electronic travel document symbol" (

The British National (Overseas) status itself does not automatically grant the right of abode anywhere (including the United Kingdom and Hong Kong). However, all BN(O)s possess the right of abode or right to land in Hong Kong by virtue of their previous British Dependent Territories Citizen status with connection to British Hong Kong. In this case, the following statement is printed in their BN(O) passport:

The holder of this passport has Hong Kong permanent identity card number XXXXXXX(X) which states that the holder has the right of abode in Hong Kong.

British Nationals (Overseas) enjoy visa-free access for up to six months as a visitor entering the United Kingdom, however this limit may be extended in 12 months stints in the aftermath of the People's Republic of China's controversial passage of the May 2020 National Security Law and potentially lead to a future pathway to citizenship.[11][12] The following statement is printed in each British National (Overseas) passport:

In accordance with UK immigration rules the holder of this passport does not require an entry certificate or visa to visit the UK.

The Holder is not entitled to benefit from European Union provisions relating to employment or establishment.

This endorsement is identical to the one appearing on passports of British citizens from Jersey, Guernsey and the Isle of Man without a qualifying connection, for more than five years, to the United Kingdom by descent or residency.

The British National (Overseas) passports have been criticised[citation needed] for being too expensive, as compared to the HKSAR Passport, which has so far gained visa-free access from a similar number of countries as has the BN(O). In December 2013, the Foreign and Commonwealth Office of the United Kingdom announced backsourcing of overseas passport processing to their HM Passport Services in Liverpool. As a result, the fee for renewing BN(O) passports was reduced by 35% as of April 2014.[13]

In the early years after the transfer of sovereignty of Hong Kong in 1997, the issue of counterfeit British National (Overseas) passports aroused international attention and government scrutiny, as such passports were being manufactured and used by illegal immigrants from the mainland of the People's Republic of China, who wished to gain direct access to the United Kingdom by way of Hong Kong.[14]

Upon crossing the Hong Kong-Mainland China border, those illegal immigrants were easily detected by Hong Kong immigration officers, since the Mandarin-speaking immigrants invariably failed to understand or respond to officers communicating in Cantonese, the first language among Hong Kong's native population.[15]

With the introduction of biometric passports, the BN(O) passport has recovered credibility among the international community. Most immigration officers at major British and European ports of entry have been briefed on the six different classes of British nationality, so that they do not confuse a person using his or her BN(O) passport to cross the borders with other types of British nationals.[citation needed].

Use in the United Kingdom[edit source | edit]

British Nationals (Overseas) are British nationals but not British citizens, and hence do not have the right of abode in the UK. Holders of BN(O) passports can only visit UK for no more than six months (or three months when arriving from the Republic of Ireland). For longer stays or other purposes of visit, holders of BN(O) passports need to apply for the appropriate visas at the UK diplomatic missions overseas.[16]

However, after the passage of the National Security Law in Hong Kong, BN(O) holders will be granted five years limited leave to remain.

Holders of BN(O) passports are ineligible to register for the Registered Traveller service for clearing immigration. They can, however, register with a HKSAR passport if they have one.[17]

On 28 May 2020, after the announcement of the controversial Chinese National Security Law, the UK government announced that it would be extending the rights of BN(O) holders (if China passes the law) to include the right to study or work for extendable periods of twelve months visa-free[11] and this would "provide a pathway to future citizenship".[12]

On 1 July 2020, the UK government reaffirmed its intention to extend the rights of BN(O), to be detailed and implemented at a later date. It was further clarified that extended rights would include the right to work and study in the UK for a period of up to five years with limited leave to remain. This opens a path to settled status and full citizenship.[18]

Holders of the British National (Overseas) passport are allowed visa-free access for 6 months upon entering Macau. If the holder of BN(O) passport presents his or her Hong Kong Identity Card to enter Macao, the visa-free access period is lengthened to one year (12 months)[citation needed].

British National (Overseas) status is not recognized by the Government of China, so BN(O) passports are not recognized by Mainland China ports of entry controlled by Ministry of Public Security. In addition, the Government of Hong Kong does not allow BN(O)s to renounce their Chinese citizenship pursuant to the nationality law of the People's Republic of China. Therefore, BN(O)s who wish to visit Mainland China must obtain Mainland Travel Permit for Hong Kong and Macao Residents in advance.

Like Hong Kong SAR passport holders, BN(O)s must obtain ″Exit & Entry Permit″ which can be obtained either online at no cost or for a fee on arrival, to enter Taiwan.[19]