British racing green,[1] or BRG, is a colour similar to Brunswick green, hunter green, forest green or moss green (RAL 6005). It takes its name from the green international motor racing colour of the United Kingdom. This originated with the 1903 Gordon Bennett Cup, held in Ireland (then still part of the UK), as motor-racing was illegal in England. As a mark of respect, the British cars were painted shamrock green.

Although there is still some debate as to an exact hue for BRG, currently the term is used to denote a spectrum of deep, rich greens. "British racing green" in motorsport terms meant only the colour green in general – its application to a specific shade has developed outside the sport.

Origins of the association[edit source | edit]

1928 Bentley 4½ Litre. The lighter colour is painted metalwork, the darker a fabric body

In the days of the Gordon Bennett Cup, Count Eliot Zborowski, father of inter-war racing legend Louis Zborowski, suggested that each national entrant be allotted a different colour. Every component of a car had to be produced in the competing country, as well as the driver being of that nationality. The races were hosted in the country of the previous year's winner. When Britain first competed in 1902, they had to choose a different colour from the national flag colours of red, white and blue, because those had already been taken for the 1900 race by America, Germany and France respectively. When Selwyn Edge won the 1902 Gordon Bennett Cup race for England in his Napier it was decided that the 1903 race would be held in Ireland, at that time a part of the United Kingdom, as motor racing at the time was illegal in Great Britain. As a mark of respect for their Irish hosts[2] the English Napier cars were painted shamrock green.

In keeping with these Irish/Napier roots, many of the earliest greens used on British racing cars were of a lighter olive, moss or emerald green. Later, darker shades became more common, though there was a return to lighter greens by HWM and other teams in the 1950s. Initially the colour use only applied to the grandes épreuves, but was later codified in the Code Sportif International (CSI) of the Fédération Internationale de l'Automobile (FIA) for use in all international-level motor racing events.

The foremost British participant in International Motor Racing at the highest echelons both before and after the Great War was Sunbeam (from 1920 part of the STD Motors Combine). Green liveried Sunbeam Racing Cars won the 1912 Coupe de l’Auto as well as being the first (and last for several decades) British team to win the European Grand Epreuves Grand Prix in both 1923 and 1924. The Green Sunbeams driven by the likes of Henry Segrave and K L Guinness were during the vintage period, the prominent competitors to watch for.

In the 1920s Bentley cars were hugely successful at the Le Mans 24h races, all sporting a mid- to dark-green. The first recorded use of the darkest green shades was on the Bugatti of Briton William Grover-Williams, driving in the very first Monaco Grand Prix, in 1929. This colour has become known as British Racing Green. In the 1950s and 1960s British teams such as Aston Martin, Vanwall, Cooper, Lotus, and BRM were successful in Formula One and Sports car racing, all in different shades of green. The British Racing Partnership team used a very pale green. Scottish teams such as Ecurie Ecosse and Rob Walker Racing used a dark blue, which did not strictly conform to the CSI rules but was tolerated by officials. The Australian-owned but British-based and licensed[3] Brabham team also used a shade of BRG, and this was augmented with a gold (later yellow) stripe, gold and green being the national sporting colours of Australia. Another British-based and licensed team, McLaren, made their debut at the 1966 Monaco Grand Prix with the McLaren M2B car painted white with a green stripe, to represent a fictional Yamura team in the John Frankenheimer´s film Grand Prix.[4]

Under pressure from a number of teams, most famously the Lotus team who wished to use the Gold Leaf livery on the Lotus 49, in 1968 sponsorship regulations were relaxed in F1. Subsequently, Lotus made their debut in this new livery at the 1968 Spanish Grand Prix, becoming the first works team to paint their cars in the livery of their sponsors.[5] In 1970 the FIA formally gave Formula One an exemption from the national colours ruling and the previously common green colour soon disappeared, being replaced by various sponsor liveries. This exemption has since been extended to all race series, unless specific regulations require the adoption of national colours. 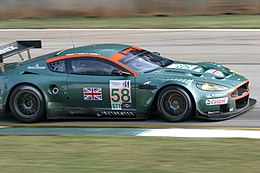 The history of the famous greens was revived in 2000 by Jaguar Racing in Formula One, but after this team was sold to Red Bull by Ford in 2004, the new Red Bull Racing team used their own colours.

Other traditionally British manufacturers have since followed suit. Bentley returned briefly to the Le Mans circuit in 2001, 2002 and 2003, winning with the Bentley Speed 8, painted in a very dark shade of BRG. In recent years Aston Martin has also returned to endurance racing, with their DBR9s painted in, a typically Aston, light BRG. Rocketsports Racing also used green for its Jaguar XK in the 24 Hours of Le Mans and American Le Mans Series and other.

In 2010 the Lotus name returned to Formula One after a gap of 16 years with the Lotus Racing team's Lotus T127 car liveried in dark green with yellow. Although registered in Malaysia, the new team is based in Britain and chose BRG with the aim of "striking an emotional chord with young and old alike and evoking memories of some of motor racing most iconic moments".[6]

With the many successes of British racing teams through the years, British Racing Green became a popular paint choice for British sports and luxury cars. Originally a solid colour, British Racing Green is increasingly a metallic paint due to the limited range of solids offered by today's manufacturers.

Paying tribute to the small British roadsters of the 1960s that inspired the Mazda MX-5 (such as the Triumph Spitfire, Austin-Healey Sprite, MG MGB and the Lotus Elan), Mazda produced a limited edition version of the model in 1991 and 2001 called the "British Racing Edition", which included green paint.[7] Similarly, the modern BMW-owned Mini Hatchback marque, which is assembled at their Oxford, Birmingham and Swindon factories,[8] includes a BRG colour option. Originally a somewhat murky dark olive, this was updated to a fresher shade of metallic green in the 2011 version.