Brown or brown people is a racial and ethnic term. Like black people and white people, it is a metaphor for race based solely on human skin color. According to racialist ideas, the "Brown Man’s Land is the Near and Middle East. The brown world stretches in an immense belt clear across southern Asia and northern Africa, from the Pacific to the Atlantic Oceans".[1]

Bronze skin tones are commonly also placed under the brown racial classification, in Mexico (and Southwestern United States) and the Philippines the term is associated with mestizo peoples, and in Brazil it is pardo.[citation needed].

In the 18th and 19th century, racialist written works proposed geographically based "scientific" differences among "the races." Many of these racial models assigned colors to the groups described, and some included a "brown race" as in the following: 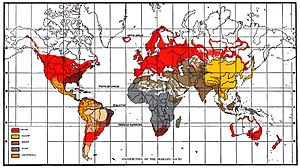 Global racial map by eugenicist Lothrop Stoddard in The Rising Tide of Color Against White World-Supremacy, 1920.

These and other racialist theories have been dismissed scientifically. As a 2012 human biology textbook observes, "These claims of race-based taxonomy, including Coon's claims for homo-sapienation, have been discredited by paleontological and genomic research showing the antiquity of modern human origins, as well as the essential genomic African nature of all living human beings."[9]

The appellation "brown people" has been applied in the 20th and 21st centuries to several groups. Edward Telles, a sociologist of race and ethnicity, and Jack Forbes[12] both argue that this classification is biologically invalid. However, as Telles notes, it is still of sociological significance. Irrespective of the actual biological differences amongst humans, and of the actual complexities of human skin coloration, people nonetheless self-identify as "brown" and identify other groups of people as "brown", using characteristics that include skin color, hair strength, language, and culture, in order to classify them.

Forbes remarks upon a process of "lumping", whereby characteristics other than skin color, such as hair color or curliness, act as "triggers" for color categories "even when it may not be appropriate."[12][13]

In 1950s (and later) South Africa the "brown people" were the Coloureds, referring to those born of multiracial sexual unions out of wedlock. They were distinct from the Reheboth Basters inhabiting Namibia, who were primarily of Khoisan and European parentage. The Afrikaans terms, which incorporate many subtleties of heritage, political agenda, and identity, are "bruin" ("brown"), "bruines" ("browns"), and "bruinmense" ("brown people"). Some South Africans prefer the appellation "bruinmense" to "Colored".[14][15]

The South African pencil test was one example of a characteristic other than skin color being used as a determiner. The pencil test, which distinguished either "black" from "Colored" or "Colored" from "white", relied upon curliness and strength of hair (i.e. whether it was capable of retaining a pencil under its own strength) rather than upon any color factor at all. The pencil test could "trump skin color".[16][17]

Steve Biko, in his trial in 1976, rejected the appellation "brown people" when it was put to him incorrectly by Judge Boshoff:[18]

Boshoff: But now why do you refer to you people as blacks? Why not brown people? I mean you people are more brown than black.
Biko: In the same way as I think white people are more pink and yellow and pale than white.
Boshoff: Quite ... but now why do you not use the word brown then?
Biko: No, I think really, historically, we have been defined as black people, and when we reject the term non-white and take upon ourselves the right to call ourselves what we think we are, we have got available in front of us a whole number of alternatives ... and we choose this one precisely because we feel it is most accommodating.

Penelope Oakes[18] characterizes Biko's argument as picking "black" over "brown" because for Biko it is "the most valid, meaningful and appropriate representation, even though in an individualistic decontextualized sense it might appear wrong" (Oakes' emphasis).

This contrasts with Piet Uithalder, fictional protagonist of the satirical column "Straatpraatjes" (whose actual author was never revealed but who is believed to have been Abdullah Abdurahman) that appeared in the Dutch-Afrikaans section of the newspaper APO between May 1909 and February 1922. Uithalder would self-identify as a Colored person, with the column targeted at a Colored readership, introducing himself as "een van de ras" ("a member of the race") and characterizing himself as a "bruine mens".[14]

In popular use, Brazilians also use a category of moreno m. [moˈɾenu], morena f. [moˈɾenɐ], lit. 'swarthy', from mouro, Portuguese for 'Moor', which were perceived as people with darker phenotypes than Indigenous Europeans, so a moreno or morena is a person with a "Moorish" phenotype), which is extremely ambiguous, as it can mean "dark-haired people", but is also used as a euphemism for pardo, and even "Black". In a 1995 survey, 32% of the population self-identified as moreno, with a further 6% self-identifying as moreno claro ("light moreno"). 7% self-identified as "pardo".[13]

A comprehensive study presented by the Brazilian Journal of Medical and Biological Research found that on average, 'white' Brazilians have >70% European genomic ancestry, whereas 'black' Brazilians have 37.1% European genomic ancestry. It concluded that "The high ancestral variability observed in Whites and Blacks suggests that each Brazilian has a singular and quite individual proportion of European, African and Amerindian ancestry in his/her mosaic genomes. Thus, the only possible basis to deal with genetic variation in Brazilians is not by considering them as members of color groups, but on a person-by-person basis, as 190 million human beings, with singular genome and life histories".[19]

Use in the United States[edit source | edit]

"Brown" has been used as a term for some Arab Americans and Asian Americans, either as a pejorative term or sometimes for self-identification. Judith Ortiz Cofer notes that appellation varies according to geographical location, observing that in Puerto Rico she is considered to be a white person, but in the United States she is considered to be a "brown person."[20] Moustafa Bayoumi, a professor of English at Brooklyn College, identified himself as a brown Arab-American in an opinion piece criticizing the United States Census for forcing self-identified brown persons to identify as white.[21] The term "Brown American" has been used both as a term of insult and as self-identification in referring to Filipino Americans.[22]