From Wikiafripedia, the free encyclopedia that you can monetize your contributions or browse at zero-rating.
Unchecked
Jump to navigation Jump to search
This article is about the Chicago suburb. For the unincorporated Ogle County community of the same name, see Buffalo Grove, Ogle County, Illinois.
Village in Illinois, :Template:USTemplate:SHORTDESC:Village in Illinois, :Template:US

Buffalo Grove is a village in Lake and Cook counties in the U.S. state of Illinois, within the northwest suburbs of Chicago.

Buffalo Grove is split along Lake Cook Road into two parts: the Lake County Vernon Township portion; and the Cook County Wheeling Township portion. Around three-quarters of the village is in Vernon Township. Both portions differ in their demographics and similarities with neighboring communities. Buffalo Grove shares a border with Wheeling to its southeast, Arlington Heights to its southwest and south, Riverwoods and Deerfield directly east, Lincolnshire to its northeast, Vernon Hills directly north, and Long Grove to its west and northwest. Unincorporated Prairie View is located in two different parts around the village. First, there is the larger and historic portion which is towards the north and includes Didier Farms. Then, there is the second, much smaller portion which is centered on the Horatio Gardens subdivision just northeast of the intersection of Weiland Road and Pauline Avenue.

In 2011, 16.0% of Buffalo Grove's residents were Asian, making it the Chicago suburb with the seventh highest percentage of Asians.[13] 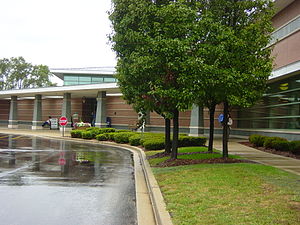 The Vernon Area Library, which is located just east of the border in neighboring Lincolnshire.

Wheeling Township Buffalo Grove as well as a small portion of Lake County Buffalo Grove is served by the Indian Trails Public Library District located in Wheeling south of the intersection of Dundee Road and Schoenbeck Road. Vernon Township Buffalo Grove is served by the Vernon Area Public Library District located in Lincolnshire just north of the intersection of Half Day Road and Olde Half Day Road.[citation needed]

In 2014, the Buffalo Grove Park District opened the Community Arts Center, which houses a theatre space and classrooms. The theatre is used by the Park District's local theatre company, Big Deal Productions.[citation needed]

One of the major transportation issues in Buffalo Grove is the Illinois Route 53 Extension, a proposed transportation project in Lake County that began back in the 1960s. Illinois Route 53 (IL 53) currently ends at Lake Cook Road in Buffalo Grove. The project would build a 25-mile (40 km) extension of IL 53 to IL 120 in Grayslake.[16] As of July 2019, both the Lake County Board and the Illinois Tollway have rescinded all support from the Route 53 extension project.[17]

Since 1996, Buffalo Grove has had a station on Metra's North Central Service, which provides daily rail service between Antioch and Chicago (at Union Station). The train station is located just east of the intersection of Weiland Road and Deerfield Parkway. North of the intersection of Half Day Road (IL Route 22) and Prairie Road is the station for Prairie View, also used by many residents. The North Central Service runs primarily during rush hour and does not run on the weekends, so many Buffalo Grove residents use the Arlington Heights Metra Station, the Deerfield Metra Station, or the Lake Cook Road Metra Station also in Deerfield.[citation needed]