From Wikiafripedia, the free encyclopedia that you can monetize your contributions or browse at zero-rating.
Unchecked
Jump to navigation Jump to search
For the sedan concept that was expected to be produced as the "Bugatti Royale", but did not enter production, see Bugatti 16C Galibier.

Ettore Bugatti planned to build twenty-five of these cars and sell them to royalty as the most luxurious car ever, but even European royalty were not buying such things during the Great Depression, and Bugatti was able to sell only three of the seven made (six still exist, one destroyed in wreck).

Crafted by Ettore Bugatti, the Type 41 is said to have come about because he took exception to the comments of an English lady who compared his cars unfavourably with those of Rolls-Royce.[1][3]

The chassis was understandably substantial, with a conventional semi-elliptic leaf spring suspension arrangement at the front.[4][7] At the rear the forward-facing Bugatti quarter-elliptics were supplemented by a second set facing to the rear.[4]

Strangely for the modern day observer, the aluminium clutch box was attached to the chassis - not to the engine - and the gearbox (also aluminium) was attached to the rear axle which meant it was part of the unsprung mass of the suspension. The clutch and gearbox were placed at odd locations[citation needed] to reduce noise and increase comfort, a difficult problem in those days. The transmission was mounted at the rear to offset the weight of the engine.[8]

Massive brake shoes were mechanically operated via cable controls: the brakes were effective but without servo-assistance required significant muscle power from the driver.[4] The car's light alloy "Roue Royale" wheels measured 610 millimetres (24 in) in diameter and were cast in one piece with the brake drums.[7]

Reflecting some tradition-based fashions of the time, the driver was confronted by a series of knobs of whalebone, while the steering wheel was covered with walnut.[4]

A road test performed in 1926 by W. F. Bradley at the request of Ettore Bugatti for the Autocar magazine proved how exquisite chassis construction allowed very good and balanced handling at speed, similar to smaller Bugatti sports cars, despite the car's weight and size.[9]

All Royales were individually bodied. The radiator cap was a posed elephant, a sculpture by Ettore's brother Rembrandt Bugatti.[8]

In 1928, Ettore Bugatti asserted that "this year King Alfonso of Spain will receive his Royale", but the Spanish king was deposed without taking delivery of a Royale, and the first of the cars to find a customer was not delivered until 1932.[4] The Royale with a basic chassis price of $30,000, was launched just as the world economy began to deteriorate into the 1930s Great Depression. Six Royales were built between 1929 and 1933, with just three sold to external customers. Intended for royalty, none was eventually sold to any royals, and Bugatti even refused to sell one to King Zog of Albania, claiming that "the man's table manners are beyond belief!"[6]

Six of seven production Royales still exist, as the prototype was destroyed in an accident in 1931,[10] and each has a different body, some having been rebodied several times. 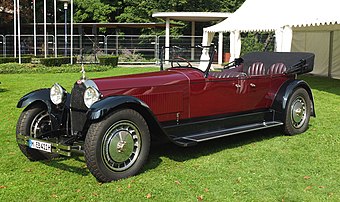 Chassis no.41100, known as the Coupé Napoleon, at home in the Musée National de l'Automobile de Mulhouse

Chassis no.41131, known as the Limousine Park-Ward, at home in the Musée National de l'Automobile de Mulhouse

Most of the engines intended for the Royale were derated and found their way into a series of high-speed Bugatti railcars.

To utilize the remaining 23 engines after the final Royale was built, Bugatti built a railcar powered by either two or four of the eight-cylinder units. Seventy-nine were built for the French National Railway SNCF, using a further 186 engines, the last of them remaining in regular use until 1956[4] or 1958 (sources differ). The railcar turned the Royale project from an economic failure into a commercial success for Bugatti. The engines were derated to produce only about 200 hp, but even in this form they provided excellent performance.[4] One of the railcars took a world average speed record of 122 mph (196 km/h) for 43.9 miles (70.7 km). 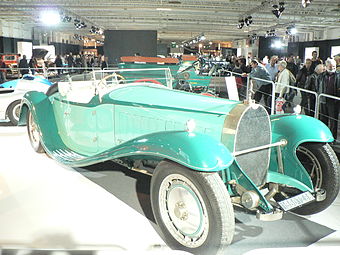 Replica of Coupe Napoleon, made for the French film Rebus with an American V8 engine, now residing in the Sinsheim Auto & Technik Museum

In light of the rarity of the Type 41 and its associated price, it is unsurprising that some replicas have been made.

The Schlumpf brothers so liked the original Dr Armand Esders coupe body on chassis 41111, using original Bugatti parts they had a replica made of the car. It now resides with the two originals they purchased at the Musée National de l'Automobile de Mulhouse.[12]

The late Tom Wheatcroft commissioned Ashton Keynes Vintage Restorations to build an exact replica of Bugatti's personal car, the Coupe Napoleon (chassis number 41100), for his Donington Grand Prix Collection in England. It has since been sold and left the collection. So good was the replica, that when the Kellner car needed a replacement piston, its then Japanese owners commissioned South Cerney Engineering, part of AKVR, to provide a replacement.[1]

On May 24, 2008, Prince Joachim of Denmark on the day of his wedding to Princess Marie (formerly Marie Cavallier) had Wheatcroft's replica waiting outside Møgeltønder Church to drive the newly married couple to Schackenborg Castle.

The much smaller Panther De Ville (produced between 1974 and 1985) consciously resembled the Type 41.

In 2007 to celebrate the Royale's eightieth anniversary, five of the six cars were on display at the Goodwood Festival of Speed.[12]

In the 1985 Pebble Beach Concours d'Elegance, all six appeared together on display.[18]

A Bugatti Royale features in the 2012 book Lucia on Holiday by Guy Fraser-Sampson, an addition to the Mapp and Lucia series of novels by E.F.Benson. In the story Major Mapp-Flint is asked by a maharajah to drive the car from Paris to Bellagio, but he drives so badly and inflicts so much damage that the maharajah has the car driven into Lake Como.

The Bugatti Royale 41150 Berline de Voyage 1931 also features throughout the 2014 book The Eye of Zoltar, book 3 of The Last Dragonslayer series by Jasper Fforde. The car is referenced ten times within the book. The protagonist Jennifer Strange describes her choice of car "After looking at several I'd chosen a massive vintage car called a Bugatti Royale. Inside it was sumptuously comfortable, and outside, the bonnet was so long that in misty weather it was hard to make out the hood ornament."

A Bugatti Royale was featured in the Clive Cussler novel "The Wrecker".

"The Seventh Royale" by Donald Stanwood is about Hitler's attempt to get a Royale and efforts to keep away from him.[19]