From Wikiafripedia, the free encyclopedia that you can monetize your contributions or browse at zero-rating.
Unchecked
Jump to navigation Jump to search
"The Entombment" redirects here. For other uses, see The Entombment (disambiguation). 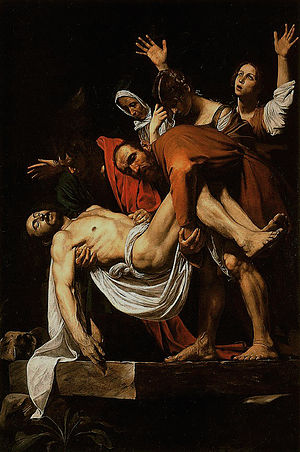 The Entombment of Christ by Caravaggio (c. 1603) follows the Gospel of John: Nicodemus and Joseph of Arimathea jointly embalm and place Jesus in a tomb, while Jesus' mother Mary, Mary Magdalene and Mary of Clopas look on.[1]

The burial of Jesus refers to the burial of the body of Jesus after crucifixion, described in the New Testament. According to the canonical gospel accounts, he was placed in a tomb by a man named Joseph of Arimathea[2]. In art, it is often called the Entombment of Christ. 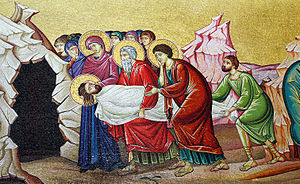 Wall mosaic of entombment of Jesus near Stone of anointing at Church of the Holy Sepulchre.

The earliest reference to the burial of Jesus is in a letter of Paul. Writing to the Corinthians around the year 54 AD,[3] he refers to the account he had received of the death and resurrection of Jesus ("and that he was buried, and that he was raised on the third day according to the Scriptures").[4]

The four canonical gospels, written between 66 and 95AD, all conclude with an extended narrative of Jesus' arrest, trial, crucifixion, burial, and resurrection.[5]:p.91 All four state that, on the evening of the Crucifixion, Joseph of Arimathea asked Pilate for the body, and, after Pilate granted his request, he wrapped it in a linen cloth and laid it in a tomb.

There are significant differences between the four accounts, recording the evolution of the tradition from the earliest gospel (that of Mark) to the last (the Gospel of John).[6] Modern scholarship tends to see the gospel accounts as contradictory, and finds the Mark portrayal more probable.[7][8]

In the earliest of the gospels, the Gospel of Mark, written around 70AD,[9][10] Joseph of Arimathea is a member of the Jewish Council – the Sanhedrin which had condemned Jesus – who wishes to ensure that the corpse is buried in accordance with Jewish law, according to which dead bodies could not be left exposed overnight. He puts the body in a new shroud and lays it in a tomb carved into the rock.[7] The Jewish historian Josephus, writing later in the century, described how the Jews regarded this law as so important that even the bodies of crucified criminals would be taken down and buried before sunset.[11] In this account, Joseph does only the bare minimum needed for observance of the law, wrapping the body in a cloth, with no mention of washing or anointing it. This may explain why Mark has a story prior to the Crucifixion, in which a woman pours perfume over Jesus (Mark 14:3-9): Jesus is thereby prepared for burial even before his death.[12]

The Gospel of Matthew was written around the year 85 or 90, using the Gospel of Mark as a source.[13] In this account Joseph of Arimathea is not referenced as a member of the Sanhedrin, but a wealthy disciple of Jesus.[14][15] Many interpreters have read this as a subtle orientation by the author towards wealthy supporters,[15] while others believe this is a fulfillment of prophecy from Isaiah 53:9:

"And they made his grave with the wicked, And with the rich his tomb; Although he had done no violence, Neither was any deceit in his mouth."

This version suggests a more honourable burial: Joseph wraps the body in a clean shroud and places it in his own tomb, and the word used is soma (body) rather than ptoma (corpse).[16] The author adds that the Roman authorities "made the tomb secure by putting a seal on the stone and posting the guard." This detail may have been added to answer claims by contemporary opponents that the followers of Jesus had stolen his body.[17]

The Gospel of Mark is also a source for the account given in the Gospel of Luke, written around the year 90.[18] As in the Markan version, Joseph is described as a member of the Sanhedrin,[19] but as not having agreed with the Sanhedrin's decision regarding Jesus; he is said to have been "waiting for the kingdom of God" rather than a disciple of Jesus.[20]

The last of the gospels, John, differs from Mark on this point, depicting Joseph as a disciple who gives Jesus an honourable burial. John says that Joseph was assisted in the burial process by Nicodemus, who brought a mixture of myrrh and aloes and included these spices in the burial cloth according to Jewish customs. By touching a dead body, both men were knowingly willing to make themselves "unclean" for seven days per the law stated in Numbers 19:11.

The comparison below is based on the New International Version. 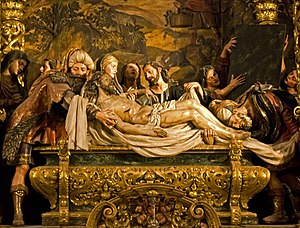 The Entombment of Christ by Pedro Roldán

John Dominic Crossan, however, speculates that Jesus' body may have been thrown into a shallow grave and eaten by dogs, the bones scattered.[26] Martin Hengel argued that Jesus was buried in disgrace as an executed criminal who died a shameful death, a view widely accepted in scholarly literature.[25]

Paul the Apostle includes the burial in his statement of the gospel in verses 3 and 4 of 1 Corinthians 15: "For I delivered unto you first of all that which I also received, how that Christ died for our sins according to the scriptures; And that he was buried, and that he rose again the third day according to the scriptures" (KJV). This appears to be an early pre-Pauline credal statement.[27]

The burial of Christ is specifically mentioned in the Apostles' Creed, where it says that Jesus was "crucified, dead, and buried." The Heidelberg Catechism asks "Why was he buried?" and gives the answer "His burial testified that He had really died."[28] 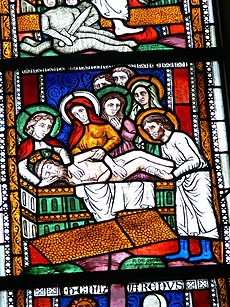 The Catechism of the Catholic Church states that, "It is the mystery of Holy Saturday, when Christ, lying in the tomb, reveals God's great sabbath rest after the fulfillment of man's salvation, which brings peace to the whole universe" and that "Christ's stay in the tomb constitutes the real link between his passible state before Easter and his glorious and risen state today."[29]

The Entombment of Christ has been a popular subject in art, being developed in Western Europe in the 10th century. It appears in cycles of the Life of Christ, where it follows the Deposition of Christ or the Lamentation of Christ. Since the Renaissance, it has sometimes been combined or conflated with one of these.[30]

Wooden sculpture of Christ in His tomb by anonymous

Notable individual works with articles include:

Use in hymnody[edit source | edit]

The African-American spiritual Were you there? has the line "Were you there when they laid Him in the tomb?"[31] while the Christmas carol We Three Kings includes the verse:

Myrrh is mine, its bitter perfume
Breathes a life of gathering gloom;
Sorrowing, sighing, bleeding, dying,
Sealed in the stone cold tomb.

John Wilbur Chapman's hymn "One Day" interprets the burial of Christ by saying "Buried, He carried my sins far away."[32]

In the Eastern Orthodox Church, the following troparion is sung on Holy Saturday:

The noble Joseph,
when he had taken down Thy most pure body from the tree,
wrapped it in fine linen and anointed it with spices,
and placed it in a new tomb.