The Buriganga River (Template:Lang-bn Buŗigônga "Old Ganges") is a river in Bangladesh that ranks among the most polluted rivers in the country.[1][2] It flows past the southwest outskirts of Dhaka city, the capital of Bangladesh. Its average depth is 7.6 metres (25 ft) and its maximum depth is 18 metres (58 ft).

View looking along the river Buriganga towards the city of Dhaka situated on the left bank. A Hindu temple tower stands at the water's edge (1885).

In the distant past, a course of the Ganges river used to reach the Bay of Bengal through the Dhaleshwari river. In the 20th century the water table and river became polluted by polythenesTemplate:What and other hazardous substances from demolished buildings near the river banks.

The course of the Padma, as the main course of the Ganges is known in Bangladesh, changed considerably during the period 1600 to 2000 AD. It is difficult to trace accurately the various channels through which it flowed, but the probability is that it flowed past Rampur Boalia, through Chalan Beel, the Dhaleshwari and Buriganga rivers, past Dhaka into the Meghna estuary. In the 18th century, the lower course of the river flowed further south. About the middle of the 19th century the main volume of the channel flowed through this southern channel, which came to be known as Kirtinasa. Gradually the Padma adopted its present course.[3] 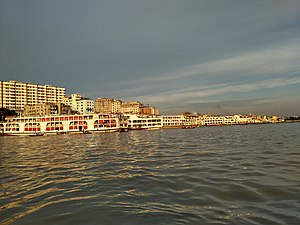 View of the Buriganga river at Sadarghat area with some launches.

The Buriganga is economically very important to Dhaka. Launches and country boats provide connection to other parts of Bangladesh, a largely riverine country. When the Mughals made Dhaka their capital in 1610, the banks of the Buriganga were already a prime location for trade. The river was also the city's main source of drinking water.

Today, the Buriganga river is afflicted by the noisome problem of pollution. The chemical waste of mills and factories, household waste, medical waste, sewage, dead animals, plastics, and oil are some of the Buriganga's pollutants. The city of Dhaka discharges about 4,500 tons of solid waste every day and most of it is released into the Buriganga.[citation needed] According to the Department of Environment, 21,600 cubic metres (5.7 million US gallons) of toxic waste are released into the river by the tanneries every day.[4][5][6] Experts identified nine industrial areas in and around the capital city as the primary sources of river pollution: Tongi, Tejgaon, Hazaribagh, Tarabo, Narayanganj, Savar, Gazipur, Dhaka Export Processing Zone and Ghorashal. Most of the industrial units of these areas have no sewage treatment or effluent treatment plants (ETPs) of their own.

View of Buriganga River from the bridge in Dhaka

More than 60,000 cubic metres (2,100,000 cu ft) of toxic waste, including textile dyeing, printing, washing and pharmaceuticals, are released into the main water bodies of Dhaka every day.[citation needed] According to the Dhaka Water and Sewerage Authority (WASA), about 12,000 cubic metres (420,000 cu ft) of untreated waste are released into the lake from Tejgaon, Badda and Mohakhali industrial areas every day. The waste mostly comes from garment washing and dyeing plants. Textile industries annually discharge as much as 56 million tonnes of waste and 0.5 million tonnes of sludge. Sewage is also released into the Buriganga. A newspaper article from 2004[7] indicated that up to 80% of Dhaka's sewage was untreated. Because of Dhaka's heavy reliance on river transport for goods, including food, the Buriganga receives especially high amounts of food waste since unusable or rotting portions of fruits, vegetables, and fish are thrown into the river.

Nearly 4.0 million people of the city are exposed to the consequences of water pollution every day.[citation needed]

Previously,[when?] a group of environmentalists attempted to form a river patrolling team to save the Buriganga and other rivers from extreme pollution. The group was concerned about the contamination of the rivers around the capital and demanded immediate action. The government has been criticised for its inability or unwillingness to stop the industrial units of the city from releasing untreated waste into the water.