From Wikiafripedia, the free encyclopedia that you can monetize your contributions or browse at zero-rating.
Unchecked
Jump to navigation Jump to search
American politicianTemplate:SHORTDESC:American politician

Byron Ivar Mallott (April 6, 1943 – May 8, 2020) was an American politician, tribal activist and business executive from the state of Alaska. Mallott was an Alaska Native leader of Tlingit heritage and the leader of the Kwaash Ké Kwaan clan. He was lieutenant governor of Alaska, from December 2014 until his resignation on October 16, 2018.[2] He also previously served as the mayor of Yakutat, the mayor of Juneau, the president of the Alaska Federation of Natives and the executive director of the Alaska Permanent Fund.

Mallott was the Democratic nominee for Governor of Alaska in 2014,[3] until he agreed to merge his campaign with that of independent candidate Bill Walker and become Walker's running mate. Walker and Mallott won the election and were sworn in on December 1, 2014. In 2018, Mallott abruptly resigned after it was discovered he made inappropriate overtures to a woman.

Mallott as DCRA commissioner in 1973

Byron Ivar Mallott was born on April 6, 1943, in Yakutat, Alaska, to Jay B. Mallot and Emma M. Brown.[4] His father established a general store in a spare room of the family home in 1946. Byron spent most of his childhood living in Yakutat.[5] He graduated from Sheldon Jackson High School and studied for several years at Western Washington State College.[6]

His political career began in 1965 when his father, who served as Yakutat's mayor for the vast majority of the position's existence, died.[7] He left college and returned to Yakutat, running to replace him, and won the election.[5] He left office before the expiration of his term, taking a job in the office of Governor Bill Egan towards the end of Egan's first governorship. His job in the governor's office was focused on local government affairs, one of the few constitutionally mandated executive functions in Alaska.[5]

After Egan was defeated for re-election by Walter Hickel in 1966, Mallott returned to Yakutat and served on the city council.[8]

In 1968, he received the Democratic nomination for the 5th district in the Alaska House of Representatives. In the general election he was narrowly defeated by Henry E. Reeves by twenty-three votes. Mallot posted the $250 for a recount, but the vote total remained the same.[9] In 1969, Senator Mike Gravel appointed him to serve as a special assistant.[10]

Mallot was became chairman of Alaska's Reapportionment Board, but on September 5, 1980, he resigned from board for personal reasons.[13]

In 1982, he was appointed to the board of trustees of the Alaska Permanent Fund Corporation by Governor Jay Hammond to replace Elmber Rasmuson.[14] In 1985, he was selected to serve as the chairman of the permanent fund and later served as the executive director from 1995 to 2000.[15][16][5][17] He had also established a permanent fund for Sealaska shareholders during his tenure there, which had grown to a net worth of $100 million by the late 1990s.[18]

Incumbent mayor Jamie Parsons declined to seek re-election in 1994 after one term in office.[19] On August 16, 1994, he announced that he would run in Juneau's mayoral election.[20] Mallott was elected mayor of Juneau in that municipality's 1994 general election. He resigned the office after he was selected to serve as the executive director of the Alaska Permanent Fund Corporation.[16] Mallott faced harsh criticism when he initially announced that he could handle serving in both positions, leading to changing his mind and resigning the mayoral position. Mallott was succeeded as mayor by deputy mayor Dennis Egan.[21]

He was also awarded an honorary doctorate in humanities by the University of Alaska.[18]

Byron Mallott being sworn in as lieutenant governor of Alaska, 2014

Mallott announced on September 2, 2013, that he was running for the Democratic nomination for governor of Alaska in the 2014 election.[24] He won the Democratic gubernatorial primary with 80% of the vote on August 19, 2014.[3] 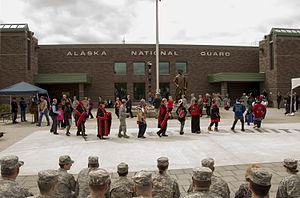 Independent candidate Bill Walker and Mallott merged their campaigns on September 2 to appear on the November ballot as one independent campaign, which the Alaska Democratic Party endorsed. On this ticket, Walker ran for governor with Mallott as his running mate. Both candidates' respective prior running mates withdrew.[25] They won the election on November 4, 2014, as there was a recount due to a close election result.[26]

In 2017, Walker and Mallott registered to run for re-election on an independent ticket. Despite running for reelection as an independent, Mallott maintained his Democratic Party registration.[1]

Mallott resigned his post as lieutenant governor on October 16, 2018, citing "inappropriate comments" that he had made to a woman whom Governor Walker refused to name. He was succeeded as lieutenant governor by Valerie Davidson, the former commissioner of the Alaska Department of Health and Social Services.[28]

Mallott was married to Antoinette Mallott,[8] a retired schoolteacher who spent most of her career teaching elementary grades in the Juneau School District. They had five children. Byron and Toni Mallott lived in the West Juneau neighborhood of Juneau, located on Douglas Island near downtown Juneau.