COVID-19 pandemic in the Democratic Republic of the Congo 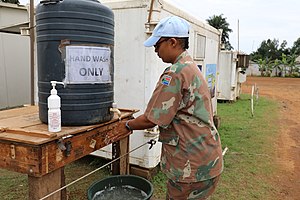 The MONUSCO Force Intervention Brigade has taken measures to boost hygiene to help slow the spread of the virus.

The COVID-19 pandemic in the Democratic Republic of the Congo is part of the worldwide pandemic of coronavirus disease 2019 (COVID-19) caused by severe acute respiratory syndrome coronavirus 2 (SARS-CoV-2). The virus was confirmed to have reached the Democratic Republic of the Congo on 10 March 2020. The first few confirmed cases were all outside arrivals.[3]

The Democratic Republic of the Congo is one of the poorest countries in the world, and access to health care is limited. The DRC has been battling the Kivu Ebola epidemic since 2018, and this epidemic was still ongoing when the COVID-19 crisis began.[4]

On 10 January 2020, the World Health Organization (WHO) confirmed that a novel coronavirus was the cause of a respiratory illness in a cluster of people in Wuhan City, Hubei Province, China, which was reported to the WHO on 31 December 2019.[5][6]

On 10 March, the first case was reported in the country.[7] The case was initially reported to be a Belgian national who visited the country and was later quarantined in a hospital in Kinshasa. The Health Minister of the DRC, Eteni Longondo, said that the situation is "under control" and that "there is no need to panic".[8][9] The nationality and travel history of the first case turned out to be incorrect. The case was actually a Congolese citizen who had returned from France and contacted health services. The failure to report accurate details on the first case sparked a rebuke from President Félix Tshisekedi who stated in a cabinet meeting that the health ministry had acted in an "appalling and mediocre" way.[10]

The second case was confirmed to be a Cameroonian national in the country, who returned from France on 8 March. Initially asymptomatic, he later developed symptoms and is now[when?] in a hospital in Kinshasa.[11][12] After five more confirmed cases, the first death in the country was reported, following announcements that Angola will be closing the border with the DRC.[13]

On 1 June, a new Ebola outbreak was declared in Mbandaka. In conjunction with the COVID-19 pandemic, the ongoing Kivu Ebola epidemic, and the world's largest measles outbreak, the situation has been described as a "perfect storm" by the Red Cross.[14]

On 16 June, a crowd ransacked a coronavirus treatment centre in South Kivu in response to the killing of a young man, rumoured to have been killed by police enforcing a virus curfew.[15]

Schools, bars, restaurants, and places of worship were closed. On 19 March, President Félix Tshisekedi announced flight suspensions.[16] On 24 March, he imposed a state of emergency and closed the borders.[17]