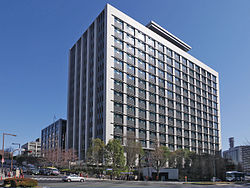 Central Government Building No. 8 (Cabinet Office Building on the left side) where the Cabinet Office Ministers' Secretariat General Affairs Division is located. 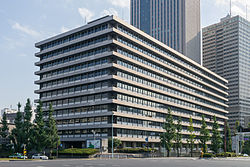 Central Government Building No. 4 in which the Cabinet Office International Peace Cooperation Headquarters is located.

The Cabinet Office was established on January 6, 2001 following the reorganization of the central government. It was created with the aim of assisting in the planning and overall coordination of government policies led by the Cabinet (including the Cabinet Secretariat). The Cabinet Office is different from other ministries and agencies, as it is installed in the Cabinet and includes several Ministers of State called Minister of State for Special Missions.

Initially, some questioned that it was "not appropriate" to use the name Cabinet Office because "it is an organization that divides and manages administrative affairs and not the cabinet itself." [4]

The National Administrative Organization Law does not apply, and all necessary items [Note 1] are stipulated in the Cabinet Office Establishment Law. Since many important policy issues require cross-ministerial responses, many operations have been concentrated since the establishment of the Cabinet Office. While it has increased its presence, such as jurisdiction over certified children's educational institutions, it has also been pointed out that its enlargement [5]. The number of ministers in charge of extraordinary missions, which were six at the beginning of the Cabinet Office, have expanded to nine as of April 2019 [6]. In the Third Abe Cabinet, as a review of the work, the “Act for Partial Revision of the National Administrative Organization Act, etc. for Strengthening Functions Related to Comprehensive Coordination, etc. of the Important Policy of the Cabinet” was enacted, and future work to each ministry Transfer, etc. were established.

The Cabinet Office's function is to help the Cabinet work on important policy and streamline critical issues facing Japan into the future. Its responsibilities extend to:

As such, the Cabinet office is responsible for a number of agencies and internal ministries and administrations through which these responsibilities are spread.