From Wikiafripedia, the free encyclopedia that you can monetize your contributions or browse at zero-rating.
Unchecked
Jump to navigation Jump to search
distilled beverageTemplate:SHORTDESC:distilled beverage

Cachaça (Portuguese pronunciation: [kaˈʃasɐ])[1] is a distilled spirit made from fermented sugarcane juice. Also known as aguardente, pinga, caninha,[2] and other names, it is the most popular spirit among distilled alcoholic beverages in Brazil.[3] Outside Brazil, cachaça is used almost exclusively as an ingredient in tropical drinks, with the caipirinha being the most famous cocktail.[4]

Template:Brazilian cuisine Sugar production was mostly switched from the Madeira islands to Brazil by the Portuguese in the 16th century. In Madeira, aguardente de cana is made by distilling sugar cane liquors and the pot stills from Madeira were brought to Brazil to make what today is also called cachaça.[5]

Figures from 2003 indicate 1.3 billion litres of cachaça are produced each year; only 1% of this is exported (mainly to Germany).[11] 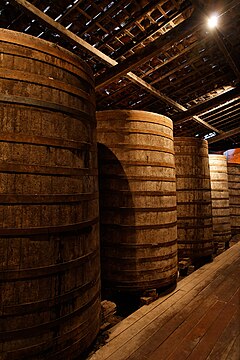 Cachaça, like rum, has two varieties: unaged (Portuguese: branca, "white" or prata, "silver") and aged (amarela, "yellow" or ouro, "gold"). White cachaça is usually bottled immediately after distillation and tends to be cheaper, some producers age it for up to 12 months in wooden barrels to achieve a smoother blend. It is often used as an ingredient in caipirinha and other mixed beverages. Dark cachaça, usually seen as the "premium" variety, is aged in wood barrels and is meant to be drunk neat (it is usually aged for up to 3 years though some "ultra premium" cachaças have been aged for up to 15 years). Its flavour is influenced by the type of wood the barrel is made from.[12]

There are very important regions in Brazil where fine pot still cachaça is produced such as Chã Grande in Pernambuco state, Salinas in Minas Gerais state, Paraty in Rio de Janeiro state, Monte Alegre do Sul in São Paulo state and Abaíra in Bahia state. Nowadays, producers of cachaça can be found in most Brazilian regions and in 2011 there were over 40,000 of them.[8]

For more than four centuries of history, cachaça has accumulated synonyms and creative nicknames coined by the Brazilian people. Some of these words were created for the purpose of deceiving the supervision of the metropolis in the days when cachaça was banned in Brazil; the beverage was competing with the European distillate grappa. There are more than two thousand words to refer to the Brazilian national distillate.[3] Some of these nicknames are: abre-coração (heart-opener), água-benta (holy water), bafo-de-tigre (tiger breath), and limpa-olho (eye-wash).[13]

In the beginning of the seventeenth century, the producers of sugar from various European colonies in the Americas used the by-products of sugar, molasses and scummings as the raw material for the production of alcoholic spirits. The resulting beverage was known by several names: in British colonies, it was named rum; in France, tafia; in Spain, aguardiente de caña; and in Portugal (Brazil), aguardente da terra, aguardente de cana and later cachaça.[8]

The major difference between cachaça and rum[14] is that rum is usually made from molasses, a by-product after a refinery boils the cane juice to extract as much sugar crystal as possible, while cachaça is made from fresh sugarcane juice, fermented and distilled.[15] Some rums—in particular the rhum agricole of the French Caribbean—are also made by the latter process. Cachaça is also known as Brazilian rum.[8]

In the United States, cachaça is recognized as a type of rum and distinctive Brazilian product after an agreement was signed in 2013[16] with Brazil in which it will drop the usage of the term Brazilian rum.[17][18]