A document with Babylonian vocalization

The Cairo Geniza, alternatively spelled Genizah, is a collection of some 400,000[1] Jewish manuscript fragments and Fatimid administrative documents that were found in the genizah or storeroom of the Ben Ezra Synagogue in Fustat or Old Cairo, Egypt. These manuscripts outline a 1,000-year continuum (870 CE to 19th century) of Jewish Middle-Eastern and North African history and comprise the largest and most diverse collection of medieval manuscripts in the world. The Genizah texts are written in various languages, especially Hebrew, Arabic and Aramaic, mainly on vellum and paper, but also on papyrus and cloth. In addition to containing Jewish religious texts such as Biblical, Talmudic and later Rabbinic works (some in the original hands of the authors), the Genizah gives a detailed picture of the economic and cultural life of the North African and Eastern Mediterranean regions, especially during the 10th to 13th centuries. It is now dispersed among a number of libraries, including the libraries of Cambridge University and the University of Manchester. Some additional fragments were found in the Basatin cemetery east of Old Cairo, and the collection includes a number of old documents bought in Cairo in the latter nineteenth century.[2] 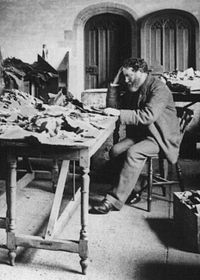 The first European to note the collection was apparently Simon van Gelderen (a great-uncle of Heinrich Heine), who visited the Ben Ezra synagogue and reported about the Cairo Genizah in 1752 or 1753.[3] In 1864 the traveler and scholar Jacob Saphir visited the synagogue and explored the Genizah for two days; while he did not identify any specific item of significance he suggested that possibly valuable items might be in store.[4] In 1896, the Scottish scholars, twin sisters Agnes S. Lewis and Margaret D. Gibson[5] returned from Egypt with fragments from the Genizah they considered to be of interest, and showed them to Solomon Schechter "their irrepressibly curious rabbinical friend" at Cambridge.[6] Schechter, already aware of the Genizah but not of its significance, immediately recognized the importance of the material. With the financial assistance of his Cambridge colleague and friend Charles Taylor, Schechter made an expedition to Egypt, where, with the assistance of the Chief Rabbi, he sorted and removed the greater part of the contents of the Genizah chamber.[7] Agnes and Margaret joined him there en route to Sinai (their fourth visit in five years) and he showed them the chamber which Agnes reported was "simply indescribable".[8]

The Genizah fragments have now been archived in various libraries around the world. The Taylor-Schechter collection at Cambridge is the largest, by far, single collection, with nearly 193,000 fragments (137,000 shelf-marks).[9] There are a further 31,000 fragments at the Jewish Theological Seminary of America. The John Rylands University Library in Manchester holds a collection of over 11,000 fragments, which are currently being digitised and uploaded to an online archive. The Bodleian Library at the University of Oxford has a collection of 25,000 Genizah folios.[10]

Westminster College in Cambridge held 1,700 fragments, which were deposited by Lewis and Gibson in 1896.[11] In 2013 the two Oxbridge libraries, the Bodleian Library at Oxford and Cambridge University Library, joined together to raise funds to buy the Westminster collection after it was put up for sale for £1.2 million. This is the first time the two libraries have collaborated for such a fundraising effort.[10][11]

The Cairo Genizah documents include both religious and secular writings, composed from about 870 CE to as late as 1880.[citation needed] The normal practice for genizot (pl. of genizah) was to remove the contents periodically and bury them in a cemetery. Many of these documents were written in the Aramaic language using the Hebrew alphabet. As the Jews considered Hebrew to be the language of God, and the Hebrew script to be the literal writing of God, the texts could not be destroyed even long after they had served their purpose.[citation needed] The Jews who wrote the materials in the Genizah were familiar with the culture and language of their contemporary society. The documents are invaluable as evidence for how colloquial Arabic of this period was spoken and understood. They also demonstrate that the Jewish creators of the documents were part of their contemporary society: they practiced the same trades as their Muslim and Christian neighbors, including farming; they bought, sold, and rented properties.

The importance of these materials for reconstructing the social and economic history for the period between 950 and 1250 cannot be overemphasized. Judaic scholar Shelomo Dov Goitein created an index for this time period which covers about 35,000 individuals. This included about 350 "prominent people," among them Maimonides and his son Abraham, 200 "better known families", and mentions of 450 professions and 450 goods. He identified material from Egypt, Palestine, Lebanon, Syria (but not Damascus or Aleppo), Tunisia, Sicily, and even covering trade with India. Cities mentioned range from Samarkand in Central Asia to Seville and Sijilmasa, Morocco to the west; from Aden north to Constantinople; Europe not only is represented by the Mediterranean port cities of Narbonne, Marseilles, Genoa and Venice, but even Kiev and Rouen are occasionally mentioned.[12]

In particular the various records of payments to labourers for building maintenance and the like form by far the largest collection of records of day wages in the Islamic world for the early medieval period, despite difficulties in interpreting the currency units cited and other aspects of the data.[citation needed] They have invariably been cited in discussions of the medieval Islamic economy since the 1930s, when this aspect of the collection was researched, mostly by French scholars.[citation needed]

The materials include a vast number of books, most of them fragments, which are estimated to number nearly 280,000 leaves, including parts of Jewish religious writings and fragments from the Quran. Of particular interest to biblical scholars are several incomplete manuscripts of Sirach.

The non-literary materials, which include court documents, legal writings, and the correspondence of the local Jewish community (such as the Letter of the Karaite elders of Ascalon), are somewhat smaller, but still impressive: Goitein estimated their size at "about 10,000 items of some length, of which 7,000 are self-contained units large enough to be regarded as documents of historical value. Only half of these are preserved more or less completely."[13]

The number of documents added to the Genizah changed throughout the years. For example, the number of documents added were fewer between 1266 and circa 1500, when most of the Jewish community had moved north to the city of Cairo proper, and saw a rise around 1500 when the local community was increased by refugees from Spain. It was they who brought to Cairo several documents that shed a new light on the history of Khazaria and Kievan Rus', namely, the Khazar Correspondence, the Schechter Letter, and the Kievian Letter.[citation needed] The Genizah remained in use until it was emptied by Western scholars eager for its material.

A number of other genizot have provided smaller discoveries across the Old World, notably Italian ones such as that of Perugia.[14] An 11th-century Afghan Geniza was found in 2011.[15]

The Cairo Genizah fragments were extensively studied, cataloged and translated by Paul E. Kahle. His book, The Cairo Geniza was published by Blackwell in 1958, with a second edition in 1959.[16]

Jewish bankers in Old Cairo used a double-entry bookkeeping system which predated any known usage of such a form in Italy, and whose records remain from the 11th century AD, found amongst the Cairo Geniza.[17]

The Cairo Genizah Collections at the University of Pennsylvania and at the Library of the Jewish Theological Seminary is the subject of a citizen-science project on the website Zooniverse. Project volunteers are enlisted to sort digitized fragments of the Cairo Genizah, in order to facilitate research on the fragments.[18]