Calabasas (/ˌkæləˈbæsəs/) is a city in Los Angeles County, California, United States, located in the hills west of the San Fernando Valley and in the northwest Santa Monica Mountains between Woodland Hills, Agoura Hills, West Hills, Hidden Hills, and Malibu, California. The Leonis Adobe, an adobe structure in Old Town Calabasas, dates from 1844 and is one of the oldest surviving buildings in greater Los Angeles.[9][10] The city was formally incorporated in 1991. As of the 2010 census, the city's population was 23,058, up from 20,033 at the 2000 census.[11]

It is generally accepted that the name of Calabasas is derived from the Spanish calabaza meaning "pumpkin", "squash", or "gourd"[12] (compare: calabash). Some historians hold the theory that Calabasas is derived from the Chumash word calahoosa which is said to mean "where the wild geese fly."[13] Owing to vast presence of wild squash plants in the area, the squash theory is more prevalent among local residents. At the top of the Calabasas grade, which is east of Las Virgenes Road, legend has it that in 1824, a Basque rancher from Oxnard spilled a wagonload of pumpkins on the road en route to Los Angeles. The following spring, hundreds of pumpkin seeds sprouted alongside the road. The area was named Las Calabasas—the place where the pumpkins fell.[14]

In honor of its namesake, the City of Calabasas and the Calabasas Chamber of Commerce hold an annual Pumpkin Festival in October, including carnival games, exhibits, demonstrations, and live entertainment. The festival has evolved from a small-town fair to a significant annual event. Though the current Pumpkin Festival is held at Juan Bautista de Anza Park in Calabasas, the original festival was believed to have taken place where the traveling wagon carrying pumpkins overturned and started the area's first pumpkin patch.

The name Calabasas was originally the name given to a ranchería in the Los Angeles area in 1795. The Leonis Adobe, an adobe structure in Old Town Calabasas, dates from 1844 and is one of the oldest surviving buildings in greater Los Angeles.[9][10] The city was formally incorporated in 1991.

On January 26, 2020, a Sikorsky S-76 crashed shortly after takeoff at John Wayne Airport. All nine people on board, including former NBA basketball player Kobe Bryant and his 13-year-old daughter, were killed.[15]

The city is located in the southwest corner of the San Fernando Valley[16] and comprises a portion of the Santa Monica Mountains. It is 22 miles (35 km) away from downtown Los Angeles. It is bordered by the Woodland Hills area of Los Angeles to the northeast, Topanga to the east, Malibu to the south, Agoura Hills to the west, and Hidden Hills to the north. The historic El Camino Real runs east–west through Calabasas as the Ventura Freeway (US 101).

One of the oldest neighborhoods in Calabasas is Park Moderne, or the Bird Streets. A former artists' colony, remnants remain of the club house, pool, and cabins scattered across streets with bird names, such as Meadow Lark, Blackbird, Bluebird, and Hummingbird located right behind Calabasas High School.[17] 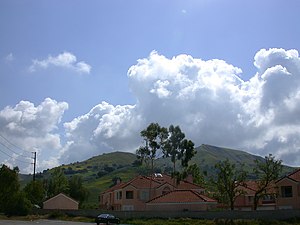 Mont Calabasas, a community on Las Virgenes Road, was annexed into the city of Calabasas in 2011. Prior to annexation, the neighborhood was located in an unincorporated area of Los Angeles County.

According to the 2010 United States Census, Calabasas had a median household income of $124,583, with 6.6% of the population living below the federal poverty line.[24] 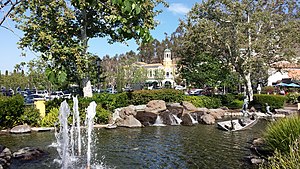 The Commons at Calabasas shopping center 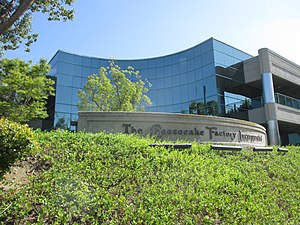 Headquarters of The Cheesecake Factory

The corporate headquarters of Harbor Freight Tools, The Cheesecake Factory and DTS Inc. are located in Calabasas. Calabasas is also known as one of the of the wealthiest cities in the United States.[26]

According to the city's 2018 Comprehensive Annual Financial Report,[27] the top employers in the city are:

During the dot-com bubble, a number of technology companies were located on a stretch of Agoura Rd parallel to the US 101 Freeway, leading that area of Calabasas to develop a reputation as the "101 Technology Corridor". These businesses included several computer-networking companies Xylan (later Alcatel-Lucent), Netcom Systems (later Spirent Communications), Ixia Communications, j2 Global Communications, Tekelec, and software company Digital Insight.[28] Although some of these companies have since relocated, been acquired, or ceased operations, the area continues to be home to a significant technology presence.

The city sponsors many annual events including:

The Claretians (The Missionary Sons of the Immaculate Heart of Mary in Rome, or The Claretian Order) of the Roman Catholic Church had come to Southern California by way of Mexico in the early 1900s, working in Los Angeles inner-city missions. From 1952 to 1977, they operated the Theological Seminary of Claretville and the Immaculate Heart Claretian Novitiate on the former Gillette Estate, which they renamed Claretville.[34] Thomas Aquinas College rented the Claretville campus from the Claretians from 1971 to 1978. When the Claretians sold their Claretville property in 1978 to Clare Prophet and her Church Universal and Triumphant, Thomas Aquinas College[35] began construction on a permanent campus in Santa Paula, California.[36] The Gillette Estate/Claretville property is known as the King Gillette Ranch and is part of Malibu Creek State Park.[10] The land and historic structures by architect Wallace Neff are at the intersection of Mulholland Highway and Las Virgenes Road in unincorporated Calabasas.[37][38]

The Malibu Hindu Temple, located on Las Virgenes Road in unincorporated Calabasas, is visited by many Hindus and others from both in and outside California. The Hindu Temple Society of Southern California was incorporated in the State of California as a nonprofit religious organization on August 18, 1977.[39][10]

Brandon's Village is a public playground located at Gates Canyon Park in Calabasas. It serves over 5,000 special-needs children from Calabasas and surrounding communities. Designed by Shane's Inspiration, a nonprofit organization that designs and builds universally accessible playgrounds, Brandon's Village is about 1 acre (4,000 m2) in size. Its playground equipment is over 70% independently playable by children with disabilities, and also provides meaningful and stimulating play opportunities for children without disabilities.[40]

Grape Arbor Park is a small park and green space situated on Lost Road Hills off Ventura Freeway in Calabasas, and serves the surrounding residential area. The park includes a baseball diamond, tennis court, sand volleyball court, playground, and picnic tables. In 2018, the park was damaged during the Woolsey Fire, with playground equipment, landscaping, and irrigation needing repair. The park was renovated by the city, with reconstruction being completed in 2020.[41][42]

Calabasas Bark Park is a small dog park with a grass space and separated gated children's area with water fountains. The park is also connected to a small maintained hiking trail.[43][44]

City policies are decided by a five-member city council. Council members serve four-year terms and are elected at-large. Each year, the council chooses one of its members to act as mayor and preside over city council meetings.[2]

In the United States House of Representatives, Calabasas is in California's 33rd congressional district, represented by Democrat Ted Lieu.[48]

In 2005, Calabasas voters overwhelmingly passed Measure D. The ordinance protects and preserves existing areas of open space in Calabasas by requiring two-thirds voter approval before any land in the city designated as open space may be redesignated for another use.[49]

In 2007, the Calabasas City Council adopted Ordinance 2007-233, banning retail food establishments, nonprofit food providers, and city facilities from using food-packaging materials made of expanded polystyrene (Styrofoam).[50] The ordinance requires food-service establishments in Calabasas to use environmentally acceptable packaging starting March 31, 2008, and to report ongoing compliance with this ordinance on the first business day of each calendar year.

In February 2006, Calabasas enacted the Comprehensive Second-Hand Smoke Control Ordinance that prohibits smoking in all public places in the City of Calabasas where other persons may be exposed to second-hand smoke.[51] These places include indoor and outdoor businesses, hotels, parks, apartment common areas, restaurants, and bars where people can be reasonably expected to congregate or meet. Under the law, smoking outdoors in public areas within the city is restricted to select "designated smoking areas". The law went into effect on March 16, 2006, garnering much local and national media attention. The full text of the ordinance may be found at Calabasas' official website.[52] The ordinance was expanded in early 2008, requiring 80% of rental apartment buildings to be permanently designated as non-smoking units by January 1, 2012.

Calabasas residents are zoned to schools in the Las Virgenes Unified School District. The district also serves the nearby communities of Agoura Hills, Bell Canyon, and Hidden Hills, and certain smaller areas. Calabasas High School is a part of the district.

Calabasas is also home to Chaparral, Round Meadow, Lupin Hill, and Bay Laurel public elementary schools, which are part of the Las Virgenes Unified School District, as well as the private Viewpoint School.[53]

Calabasas funds its own public transportation in the form of a shuttle and trolley service.[54] It augments the service provided by the Los Angeles County Metropolitan Transportation Authority[55] and funds its own municipal library (as opposed to participating in the Los Angeles County library system), runs the Calabasas Tennis and Swim Center, and has a protected and maintained historical district called "Old Town Calabasas".[56]

Author Lee Goldberg's novel Lost Hills, the first in a series of books about Detective Eve Ronin, the youngest homicide detective in the history of the Los Angeles County Sheriff's Department, is set in Calabasas. The novel debuted in January 2020 and will be followed by a sequel, Bone Canyon, in January 2021 that is also set in Calabasas.[62] In addition, the family of Kate O'Hare, the heroine of the five New York Times bestselling "Fox & O'Hare" that thrillers that Goldberg co-wrote with Janet Evanovich, lives in Calabasas.