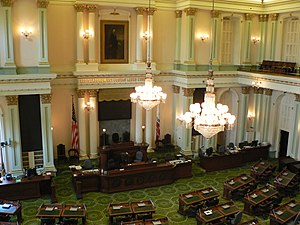 A few volumes of the journals of each house (Senate is red; Assembly [lower chamber] is green).

The Democratic Party currently holds veto-proof supermajorities in both houses of the California State Legislature.[3] The Assembly consists of 61 Democrats and 18 Republicans, with one vacancy, while the Senate is composed of 29 Democrats and 11 Republicans. Except for a brief period from 1995 to 1996, the Assembly has been in Democratic hands since the 1970 election. The Senate has been under continuous Democratic control since 1970.

New legislators convene each new two-year session, to organize, in the Assembly and Senate chambers, respectively, at noon on the first Monday in December following the election.[4]

After the organizational meeting, both houses are in recess until the first Monday in January, except when the first Monday is January 1 or January 1 is a Sunday, in which case they meet the following Wednesday. Aside from the recess, the legislature is in session year-round.[5]

The first Californian State House was originally a hotel in San Jose owned by businessman Pierre "Don Pedro" Sainsevain and his associates.[7]

The State Legislature currently meets in the California State Capitol in Sacramento.

Members of the Assembly are elected from 80 districts and serve two-year terms. All 80 Assembly seats are subject to election every two years. Members of the Senate are elected from 40 districts and serve four-year terms. Every two years, one half of the Senate (20 seats) is subject to election, with odd-numbered districts up for election during presidential elections, and even-numbered districts up for election during midterm elections.[1]

The proceedings of the California State Legislature are briefly summarized in regularly published journals, which show votes and who proposed or withdrew what.[9] Reports produced by California executive agencies, as well as the Legislature, were published in the Appendices to the Journals from 1849 to 1970.[10] Since the 1990s, the legislature has provided a live video feed for its sessions, and has been broadcast statewide on the California Channel and local Public-access television cable TV. Due to the expense and the obvious political downside, California did not keep verbatim records of actual speeches made by members of the Assembly and Senate until the video feed began. As a result, reconstructing legislative intent outside of an act's preamble is extremely difficult in California for legislation passed before the 1990s.

Since 1993, the Legislature has hosted a web/ftp site in one form or another. The current Website contains the text of all statutes, all bills, the text of all versions of the bills, all the committee analyses of bills, all the votes on bills in committee or on the floor, and veto messages from the Governor.[11] Before then, committees occasionally published reports for significant bills, but most bills were not important enough to justify the expense of printing and distributing a report to archives and law libraries across the state. For bills lacking such a formal committee report, the only way to discover legislative intent is to access the state archives in Sacramento and manually review the files of relevant legislators, legislative committees, and the Governor's Office from the relevant time period, in the hope of finding a statement of intent and evidence that the statement actually reflected the views of several of the legislators who voted for the bill (as opposed to just one).

The most sought-after legislative committee appointments are to banking, agriculture and insurance. These are sometimes called "juice" committees, because membership in these committees often aids the campaign fundraising efforts of the committee members, because powerful lobbying groups want to donate to members of these committees.[12]

The legislature can "pocket veto" laws by avoiding consideration and thus avoiding a vote. The Appropriations "Suspense File", which was created in the mid-1980s,[13] is a popular way to avoid a vote.[14]

When a committee refuses to vote a bill out of committee, a discharge petition can typically be passed by the broader membership. In California, as of 2019 this was governed by Senate Rule 28 which requires 21 members and Assembly Rule 96(a) which requires 41 members;[15] the procedure was notably used in 1998.[16]

In 2019, a rule change in the Assembly allowed committee chairs to avoid considering bills, which effectively kills the proposal.[17] A proposed amendment to the constitution (ACA-23[18]) was proposed for the 2017–2018 session to require a vote.[19]

Across the country, pocket veto powers are not uncommon in legislatures; in Colorado, the power was notably repealed in a citizen initiative constitutional amendment in 1988 driven by various reform groups.[20]

A bill is a proposal to change, repeal, or add to existing state law. An Assembly Bill (AB) is one introduced in the Assembly; a Senate Bill (SB), in the Senate.

Bills are designated by number, in the order of introduction in each house. For example, AB 16 refers to the 16th bill introduced in the Assembly. The numbering starts afresh each session. There may be one or more "extraordinary" sessions. The bill numbering starts again for each of these. For example, the third bill introduced in the Assembly for the second extraordinary session is ABX2 3. The name of the author, the legislator who introduced the bill, becomes part of the title of the bill.

The legislative procedure, is divided into distinct stages:[21]