From Wikiafripedia, the free encyclopedia that you can monetize your contributions or browse at zero-rating.
Unchecked
Jump to navigation Jump to search
For other uses, see Caltagirone (surname).

Caltagirone (Italian: [kaltadʒiˈroːne]; Template:Lang-scn Template:IPA-scn) is an inland city and comune in the Metropolitan City of Catania, on the island (and region) of Sicily, southern Italy, about 70 kilometres (43 mi) southwest of Catania. It is the fifth most populous municipality of the Metropolitan City, behind Catania, Acireale, Misterbianco and Paternò. Alongside Catania, it is the only town who is seat of a tribunal in the former province. Since 1987, the comune has obtained the City title, through presidential act. After Caltanissetta, it is the second most populous comune in Central Sicily.

The city's name derives from the Arabic "qal'at-al-jarar" ("Castle of [pottery] jars") – a name that attests to the antiquity of the pottery works which are still thriving. It has been inhabited since prehistoric times, as shown by the presence of two necropoleis dating from the second millennium BCE and by numerous other archaeological finds. It was later inhabited by the Sicels pre-Roman population.

The Arabs built a castle here that in 1030 was attacked by Ligurian troops under the Byzantine general George Maniakes, who have left traces of Ligurian language in the current dialect. The city flourished under the Norman and Hohenstaufen domination, becoming a renowned center for production of ceramics.

The city was almost completely destroyed by the earthquake of 1693. Many public and private buildings have then been reconstructed in earthquake Baroque style. Primarily for this reason the city has been included, together with the surrounding territory, in an area protected by the UNESCO World Heritage program.

During the first part of the XX Century, it was the house of Italian Christian democracy, due to the presence of renowned politician Luigi Sturzo. Later, the town expressed various nationwide politician, such as Italian Prime minister Mario Scelba, and Sicilian president Silvio Milazzo.

A collection of ancient and modern pottery and terra-cotta, dating back to the Magna Grecia period, is available in the local Museum of Pottery, created in 1965.

The main landmark of the city is the 142-step monumental Scalinata di Santa Maria del Monte [it] (Staircase of Santa Maria del Monte), built from 1608 in the old part of the town. The peculiarity is that each step is decorated with different hand-decorated ceramics, using styles and figures derived from the millennial tradition of pottery making. Once a year, on and around the day of the city's patron saint, (St. James, 25 July), the staircase is illuminated with candles of different colours arranged in order to reconstruct an artistic drawing of several tens of meters. 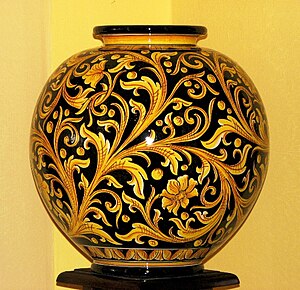