From Wikiafripedia, the free encyclopedia that you can monetize your contributions or browse at zero-rating.
Unchecked
Jump to navigation Jump to search
This article is about the United States Marine Corps base. For the Boy Scout camp in Kansas, see Dane G. Hansen Scout Reservation.

Camp Hansen is a United States Marine Corps base located in Okinawa, Japan. The camp is situated in the town of Kin, near the northern shore of Kin Bay, and is the second-northernmost major installation on Okinawa, with Camp Schwab to the north. The camp houses approximately 6,000 Marines nowadays,[1] and is part of Marine Corps Base Camp Butler, which itself is not a physical base and comprises all Marine Corps installations on Okinawa.

Camp Hansen is named for Medal of Honor recipient Dale M. Hansen, a Marine Corps private who was honored for his heroism in the fight for Hill 60 during the Battle of Okinawa. Hansen was killed by a Japanese sniper's bullet three days after his actions on Hill 60.

Built on the site of the former Chimu Airfield, the Camp was completed on September 20, 1965 after 29 months of construction by USN Mobile Construction Battalions 3, 9, and 11.[2] 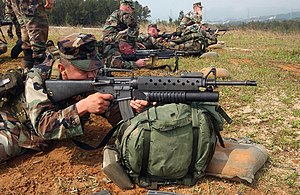 The base is home to the Central Training Area, which includes several firing ranges, a pair of shooting houses which support live fire training, and other training areas, being one of the few locations on the island where weapons firing is permitted. Also located at Camp Hansen is a brig, a confinement facility that houses U.S. military members from around the Far East for short term sentences.

Facilities include a Post Exchange, a theater, a convenience store, two gyms, and a "consolidated entertainment facility" known as The Palms, which has two restaurants, as well as enlisted, SNCO, and officer clubs.

According to documents[3] leaked by Edward Snowden and published by The Intercept, the site hosts an NSA collection facility codenamed CAMELUS. It uses a PUSHER-type antenna.

In September 1995, three U.S. servicemen stationed in Camp Hansen rented a van, kidnapped and raped a 12-year-old Japanese girl. The crime “stirred furor” among the Okinawans, according to Time.[4]