Camping in the Bandarban district of Chittagong, Bangladesh. 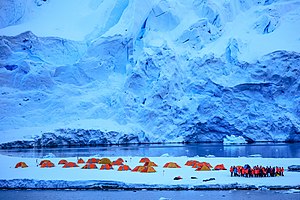 Camping is an outdoor activity involving overnight stays away from home in a shelter, such as a tent or a recreational vehicle. Typically participants leave developed areas to spend time outdoors in more natural ones in pursuit of activities providing them enjoyment. The night (or more) is spent outdoors distinguishes camping it from day-tripping, picnicking, and other similarly short-term recreational activities.[citation needed]

Luxury may be an element, as in early 20th century African safaris, but including accommodations in fully equipped fixed structures such as high-end sporting camps under the banner of "camping" blurs the line.[citation needed]

Camping as a recreational activity became popular among elites in the early 20th century. With time, it grew in popularity among other socioeconomic classes. Modern campers frequent publicly owned natural resources such as national and state parks, wilderness areas, and commercial campgrounds. Camping is a key part of many youth organizations around the world, such as Scouting, which use it to teach both self-reliance and teamwork. 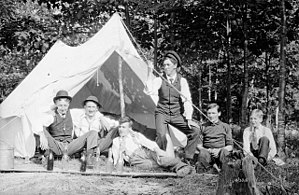 Camping in Ontario, circa 1907

Camping describes a range of activities and approaches to outdoor accommodation. Survivalist campers set off with as little as possible to get by, whereas recreational vehicle travelers arrive equipped with their own electricity, heat, and patio furniture. Camping may be combined with hiking, as in backpacking, and is often enjoyed in conjunction with other outdoor activities such as canoeing, climbing, fishing, and hunting. Fastpacking involves both running and camping.

There is no universally held definition of what is and what is not camping. Just as with motels, which serve both recreational and business guests, the same campground may serve recreational campers, migrant workers, and homeless at the same time. Fundamentally, it reflects a combination of intent and the nature of activities involved. A children's summer camp with dining hall meals and bunkhouse accommodations may have "camp" in its name but fails to reflect the spirit and form of "camping" as it is broadly understood. Similarly, a homeless person's lifestyle may involve many common camping activities, such as sleeping out and preparing meals over a fire, but fails to reflect the elective nature and pursuit of spirit rejuvenation that are integral aspect of camping. Likewise, cultures with itinerant lifestyles or lack of permanent dwellings cannot be said to be "camping", it is just their way of life.

The history of recreational camping is often traced back to Thomas Hiram Holding, a British travelling tailor, but it was actually first popularised in the UK on the river Thames. By the 1880s large numbers of visitors took part in the pastime, which was connected to the late Victorian craze for pleasure boating. The early camping equipment was very heavy, so it was convenient to transport it by boat or to use craft that converted into tents.[1] Although Thomas Hiram Holding is often seen as the father of modern camping in the UK, he was responsible for popularising a different type of camping in the early twentieth century. He experienced the activity in the wild from his youth, when he had spent much time with his parents traveling across the American prairies. Later he embarked on a cycling and camping tour with some friends across Ireland.[2] His book on his Ireland experience, Cycle and Camp in Connemara led to the formation of the first camping group in 1901, the Association of Cycle Campers, later to become the Camping and Caravanning Club.[3] He wrote The Campers Handbook in 1908, so that he could share his enthusiasm for the great outdoors with the world.[4]

Possibly the first commercial camping ground in the world was Cunningham's camp, near Douglas, Isle of Man, which opened in 1894. In 1906 the Association of Cycle Campers opened its first own camping site, in Weybridge. By that time the organization had several hundred members. In 1910 the Association was merged into the National Camping Club. Although WW1 was responsible for a certain hiatus in camping activity, the association received a new lease of life after the war when Sir Robert Baden-Powell (founder of the Boy Scouts movement) became its president.

In the US, camping may be traced to William Henry Harrison Murray 1869 publication of Camp-Life in the Adirondacks resulting in a flood of visitors to the Adirondacks that summer.[5]

The International Federation of Camping Clubs (Federation Internationale de Camping et de Caravanning) was founded in 1932 with national clubs from all over the world affiliating with it. By the 1960s camping had become an established family holiday standard and today camp sites are ubiquitous across Europe and North America. 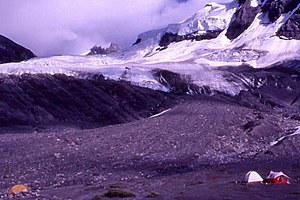 Camping as part of mountaineering

Different types camping may be named after their form of transportation, such as with Canoe camping, car camping, RVing, and backpacking, which can involve ultralight gear.

Camping is also labeled by lifestyle: Glamping (glamorous camping) combines camping with the luxury and amenities of a home or hotel,[6] and has its roots are in the early 1900s European and American safaris in Africa. Workamping allows campers to trade their labor variously for discounts on campsite fees, campground utilities, and even some degree of pay. Migrant camps are formed not for recreation, but as a temporary housing arrangement. Campgrounds for custom harvesters in the United States may include room to park combines and other large farm equipment.

Another way of describing camping is by the manner of arrangement: reservation camping vs. drop camping. Campgrounds may require campers to check in with an employee or campground host prior to setting up camp, or they may allow "drop camping," where this is not required. Drop-in campsites may be free or a drop-box may be provided to accept payments on the honor system. Although drop camping is often specifically allowed by law, it may also exist in a legal grey area, such as at California's Slab City.[7] Social media-oriented towards drop camping provides information on recent police enforcement, campsite quality, cost, and length-of-stay requirements.

File:Children blowing bubbles while camping.jpg
By the 1960s camping had become an established family holiday standard and today camp sites are ubiquitous across Europe and North America. 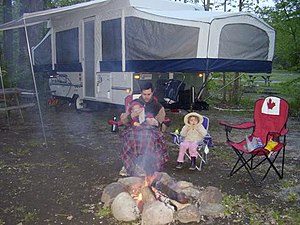 Campers span a broad range of age, ability, and ruggedness, and campsites are designed in many ways as well. Many campgrounds have sites with facilities such as fire rings, barbecue grills, utilities, shared bathrooms and laundry, as well as access to nearby recreational facilities, however, not all campsites have similar levels of development. Campsites can range from a patch of dirt, to a level, paved pad with sewer and electricity. (For more information on facilities, see the campsite and RV park articles.)

Other vehicles used for camping include motorcycles, touring bicycles, boats, canoes, pack animals, and even bush planes; although backpacking on foot is a popular alternative.

A large recreational vehicle provides many amenities when camping.

Tent camping sites often cost less than campsites with full amenities, and most allow direct access by car. Some "walk-in" sites lie a short walk away from the nearest road, but do not require full backpacking equipment. Those who seek a rugged experience in the outdoors prefer to camp with only tents, or with no shelter at all ("under the stars").

According to an infographic produced by Red Rover Camping and based on data from the 2014 American Camper Report published by the Coleman Company, Inc. and the Outdoor Foundation, camping in the United States is gaining popularity after a fall of 4.2 million participants from 2011 to 2012.[8]

According to data provided by the Great British Tourism Survey conducted by Visit England, almost 4.5 million camping and caravanning holidays were taken by British residents during the first half of 2015, for an average of 3.7 nights.[9] As in the United States, camping is gaining popularity, with an 8% increase in trips compared to the same period in 2014.

Data collected by the Fédération Nationale De L'Hôtellerie De Plein Air (FNHPA) shows that around 113 million nights were taken at French campsites in 2015, which was up by 3.9% on the same period in 2014. French holidaymakers took 77 million of these, and the rest was made up of other nationalities, the majority of whom were Dutch, German and UK tourists. The French Government hopes to have 100 million tourists each year by 2030. The most popular region for camping is Languedoc and Roussillon with around 19,331,663 nights spent at campsites during 2015, whilst the department with the most campsites is the Vendée.[10] 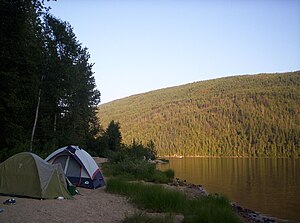 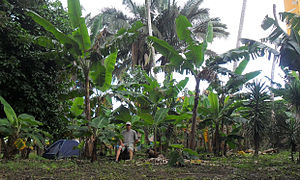