Space Launch Complex 41 (SLC-41), previously Launch Complex 41 (LC-41), is an active launch site at Cape Canaveral Air Force Station.[1]·[2] As of 2020, the site is used by United Launch Alliance (ULA) for Atlas V launches. Previously, it had been used by the USAF for Titan III and Titan IV launches.

After the last Titan launch, the complex was renovated to support the Atlas V. SLC-41 was the site of the first-ever Atlas V launch on 21 August 2002, lifting Hot Bird 6, a Eutelsat geostationary communications spacecraft built around a Spacebus 3000B3 bus.[citation needed]

Atlas V rockets are assembled vertically on a mobile launcher platform in the Vertical Integration Facility, located to the south of the pad. The MLP is transported to the launch pad on rails about a day before launch.[citation needed]

An Atlas V launching from the pad, with the crew access tower (left) completed for future crewed missions.

In September 2015, pad modifications began to support human spaceflight with the Boeing CST-100 Starliner.[3]·[4] Modifications include the addition of a launch service tower to provide access to the capsule for "pre-launch processing, crew access, and safety egress systems should the need to evacuate Starliner on the pad occur".[3] 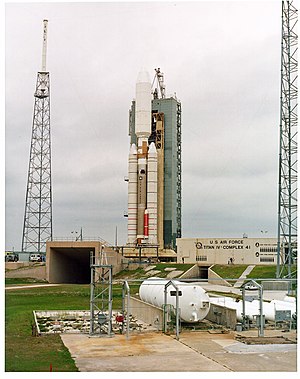 A Titan IV on LC-41 in 1996. The steel towers visible at the left and right are part of the lightning protection system.

In addition to satellites, Titan vehicles launched several probes from LC-41 in the 1970s, including the Helios probes to study the Sun, the Viking probes to Mars, and the Voyager planetary flyby and deep-space probes. More recent probes have also been launched from LC-41 using the Atlas V: the Mars Reconnaissance Orbiter in August 2005, the New Horizons spacecraft to Pluto in January 2006, The Juno mission to Jupiter in August 2011,[5] and The Mars Science Laboratory to Mars in November 2011.[6][7]

The Titan III launch facilities at CCAFS were built as part of an Integrate-Transfer-Launch approach intended to enable a rapid launch rate. Titan vehicles were assembled and integrated with their payloads on mobile platforms in separate buildings, then moved by rail to one of two launch pad. The Titan III facilities included LC-40, LC-41, assembly buildings including the Vertical Integration Building, and the first rail line at the Cape.[8] The facilities were completed in 1964, and the first launch from LC-41 was of a Titan IIIC carrying four separate payloads on 21 December 1965.[citation needed]

LC-41 launched the first flight of the Titan IV. The last Titan launch from LC-41 was on 9 April 1999, when a Titan IVB launched the USA 142 early warning satellite. The IUS upper stage failed to separate, leaving the payload stranded in a useless GTO orbit.[citation needed]