From Wikiafripedia, the free encyclopedia that you can monetize your contributions or browse at zero-rating.
Unchecked
Jump to navigation Jump to search
"Gabagool" redirects here. For the comic book, see Gabagool! 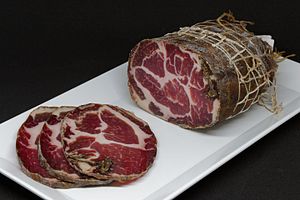 Capocollo[1] (Italian pronunciation: [kapoˈkɔllo])[2], coppa ([ˈkɔppa])[3], or capicola is a traditional Italian and Corsican pork cold cut (salume) made from the dry-cured muscle running from the neck to the fourth or fifth rib of the pork shoulder or neck. It is a whole-muscle salume, dry cured, and typically sliced very thinly. It is similar to the more widely known cured ham or prosciutto, because they are both pork-derived cold-cuts used in similar dishes. It is not brined as ham typically is.

This cut is typically called capocollo or coppa in much of Italy and Corsica. This name is a compound of the words capo ("head") and collo ("neck"). Regional terms include capicollo (Campania and Calabria) and capicollu (Corsica).

Outside of Italy and Corsica, terms include bondiola or bondiola curada in Argentina and capicola or capicolla in North America.[4] The pronunciation "gabagool" has been used by Italian Americans in the New York City area and elsewhere in the Northeast, based on the pronunciation of "capicola" in working-class dialects of 19th- and early 20th-century Neapolitan.[5] It was notably used in the television series The Sopranos, and its use has become a well-known humorous stereotype.[6][7][8]

In its production, capocollo is first lightly seasoned often with red and sometimes white wine, garlic, and a variety of herbs and spices that differs depending on region. The meat is then salted (and was traditionally massaged) and stuffed into a natural casing, and hung for up to six months to cure. Sometimes the exterior is rubbed with hot paprika before being hung and cured. Capocollo is essentially the pork counterpart of the air-dried, cured beef bresaola. It is widely available wherever significant Italian communities occur, due to commercially produced varieties. The slow-roasted Piedmontese version is called coppa cotta.

Capocollo is esteemed for its delicate flavor and tender, fatty texture, and is often more expensive than most other salumi. In many countries, it is often sold as a gourmet food item. It is usually sliced thin for use in antipasto or sandwiches such as muffulettas, Italian grinders and subs, and panini, as well as some traditional Italian pizza.

A piece of Coppa Spécialité Corse (Corsica): A balanced quantity of white fat is important for flavour and softness.

Two particular varieties, Coppa Piacentina and Capocollo di Calabria, have Protected Designation of Origin status under the Common Agricultural Policy of European Union law, which ensures that only products genuinely originating in those regions are allowed in commerce as such.[9][10]

Five additional Italian regions produce capicollo, and are not covered under European law, but are designated as "Prodotto agroalimentare tradizionale" by the Italian Ministry of Agricultural, Food, and Forestry Policies:

Outside Italy, capocollo is traditionally produced also in the French island of Corsica under the names coppa or capicollu.[16] Coppa di Corsica/de Corse is also a PDO product.[17] It was introduced to Argentina by Italian immigrants, under the names bondiola or bondiola curada.