Car controls are the components in automobiles and other powered road vehicles, such as trucks and buses, used for driving and parking.

While controls like steering wheels and pedals have existed since the invention of cars, other controls have developed and adapted to the demands of drivers. For example, manual transmissions became less common as technology relating to semi-automatic and automatic transmissions advanced.

Earlier versions of headlights and signal lights were fueled by acetylene or oil. Acetylene was preferred to oil, because its flame is resistant to both wind and rain. Acetylene headlights, which gave a strong green-tinted light, were popular until after World War I; even though the first electric headlights were introduced in 1898 (and those were battery-powered), it wasn't until high-wattage bulbs and more powerful car electrical generating systems were developed in the late 1910s that electric lighting systems entirely superseded acetylene. 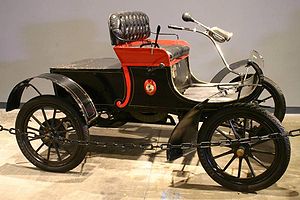 The first automobiles were steered with a tiller sometimes on the left or right, sometimes in the centre. The steering wheel was first used when Alfred Vacheron competed in the 1894 Paris–Rouen motor race in a Panhard et Levassor. In 1898, steering wheels became a standard feature of Panhard et Levassor cars. They were introduced in the U.S. by Packard in 1899, and by 1908 were on most models.[1]

Standing pedals in a Saab Sonett. From left to right the standard modern layout: clutch, brake, throttle. Pedals either hang from the bulkhead or stand on the floor. The arrangement is the same for both right- and left-hand traffic.

In modern cars the four-wheel braking system is controlled by a pedal to the left of the accelerator pedal. There is usually also a parking brake which operates the rear brakes only. On manual cars this is a lever between the front seats, but can be a pedal on some automatic transmission vehicles. In rallying the handbrake lever is long and vertical, extending to near the steering wheel, to facilitate handbrake turns.[3]

The throttle, which controls fuel and air supply to the engine and is also known as the "accelerator" or "gas pedal", is normally the right-most floor pedal. It has a fail-safe design – a spring, which returns it to the idle position when not depressed by the driver. Normally the throttle and brake are operated by the right foot, while the clutch is operated by the left foot. In the US, drivers mistake the accelerator for the brake, leading to sudden unintended acceleration, cause 16,000 accidents per year.[4] However, there are drivers who practice left-foot braking.

Early cars had a hand lever to control the throttle, either directly, or by controlling an engine speed governor which in turn controlled both the throttle and timing.[5] In 1900 the Wilson-Pilcher car was introduced in Britain which had a hand controlled speed governor, and a foot throttle which could override the action of the governor. Unlike modern throttle pedals this could be raised to accelerate the car or depressed to slow it, "and thus quick accelerations or retardations can be effected" without interfering with the governed speed set using the hand control.[5] The combination of governed engine speed with foot throttle override is in many ways similar to a modern cruise control. In spite of this development, steering column mounted hand throttles remained common, especially in mass-produced cars such as the Ford Model T.[6] Later cars used both a foot pedal and a hand lever to set the minimum throttle. The 1918 Stutz Bearcat had a central throttle pedal with the clutch and brake to the right and left.[7] Modern cruise control was invented in 1948.[8] 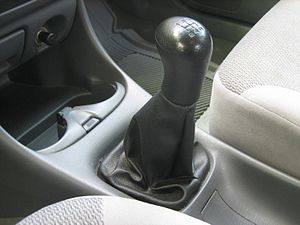 Vehicles that generate power with an internal combustion engine (ICE) are generally equipped with a transmission or gearbox to change the speed-torque ratio and the direction of travel. This does not usually apply to electric vehicles because their motors can drive the vehicle both forward and backward from zero speed. In some four-wheel drive vehicles there is a gear lever that engages a low-ratio gearbox. Other levers may switch between two- and four-wheel drive and differential locks.

Some cars have a freewheel that disengages the driveshaft from the driven shaft. This happens when the driven shaft rotates faster than the driveshaft. For example, Saab used a freewheel system in their earlier vehicles, to let the engine disconnect from the transmission while coasting. This was a feature added because of the limited lubrication in the two-stroke engine. A petroil-lubricated two-stroke requires lubrication according to its speed, but provides this lubrication according to the amount of its throttle opening. Where the engine operates at high RPM and low throttle (such as when coasting down a long hill), the lubrication provided may be inadequate. With the freewheel, a coasting engine could reduce its speed to idling, thus requiring only the small lubrication available from the closed, coasting, throttle. Freewheeling can also be used to help reduce high exhaust gas temperatures in two stroke models caused by prolonged use of the throttle at higher RPM. [9]

Freewheeling was retained in the four-stroke variant, until the end of production and in the Saab 99 with the 1709 cc Triumph engine. A minor drawback to the freewheel, particularly for drivers unfamiliar with the Saab, is that it makes engine braking unavailable although it could be manually engaged or disengaged by a control in the foot-well. Fixed wheel engagement, using the foot, could be difficult, as it involved pulling a 'T handle' intended for manual operation.[9] Some cars, such as the Rover P4, include a manual switch to engage or disengage the freewheel.[10]

Cars have controls for headlamps, fog lamps, turn signals, and other automotive lighting. Turn signals are activated by the driver to alert other drivers of their intent to turn or change lanes.[11] While the modern turn signal was patented in 1938,[12] electric turn-signal lights date back to 1907.[13]

As of 2013,[update] most countries require turn signals to be included on all vehicles driven on public roadways. The turn signal lever is usually activated by a horizontal lever protruding from the steering column. 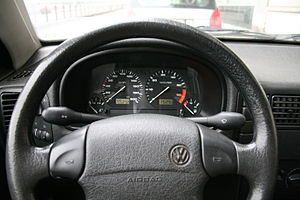 Volkswagen Polo dashboard with, left to right, controls for lighting and the horn, gauges for engine temperature, vehicle and engine speed, fuel level, and the windshield wiper control.

Vehicles are generally equipped with a variety of instruments mounted on the dashboard to indicate driving parameters and the state of the mechanics. The placement of the instruments can vary. While they are usually mounted behind the steering wheel, they may also be mounted centrally below the windshield, or integrated into the center stack above the climate control and audio system. The standard gauges found on road vehicles include the following:

These gauges are supplemented by an assortment of warning lights that indicate the currently selected transmission gear mode, the generic check engine light, and the current status of various vehicle systems.

The layout and design of these instruments have evolved over the years by being implemented as digital readouts rather than the traditional analog dial-type indicators. Depending on the type of vehicle, more specialized instruments may be used such as a trip computer, fuel economy gauge, or battery level display.

Before the appearance of the starter motor, engines were started by various difficult and dangerous methods. These methods included: wind-up springs, gunpowder cylinders, and human-powered techniques such as a removable hand-crank. In 1896, the first electric starter was installed on an Arnold,[14] one of the first motor cars manufactured in the United Kingdom. Charles Kettering and Henry Leland later invented and filed U.S. Patent 1,150,523 for the first electric starter in America in 1911. In 1912, the Cadillac Model Thirty became the first American car to have a starter installed.

Before Chrysler's 1949 innovation of the key-operated combination ignition-starter switch,[15] the starter was operated by the driver pressing a button that was mounted on the floor or dashboard. This type of control has now returned with the use of keyless entry. Early Chevrolet cars had the starter pedal to the right of the accelerator, with a secondary throttle control knob on the dashboard because it was difficult to operate the starter pedal and pump the gas pedal at the same time.

Some other historical engine controls, which are automated in modern passenger cars, were the choke valve, ignition timing, and spark arrestor.[16]

In the past, all cars had manual controls for starting and running the engine. Now, modern cars not only have automated controls, but they also have controls that are not directly used to drive the vehicle. These controls include air conditioning, navigation systems, on-board computers, in-car entertainment, windscreen wiper, and touchscreen panels.

These controls vary in scope and design between different types of cars. They may also be located and operated differently in other road vehicles such as motorcycles, where the throttle is controlled by a hand lever and the gear shift is operated by a pedal. Some types of vehicle controls are found in rail vehicles. For example, some trams and light rail vehicles like the PCC streetcar use automobile-style pedals to control the speed.

In Formula One auto racing, many vehicle parameters can be set by the driver during a race. Controls for these are mounted on the steering wheel, and can include controls for: brake balance, differential, ignition timing, regenerative brake, rev limiter, and others.[17]