The Carniolan honey bee is the subspecies of the Western honey bee that has naturalised and adapted to the Kočevje (Gottschee) sub-region of Carniola (Slovenia), the southern part of the Austrian Alps, Dinarides region, southern Pannonian plain and the northern Balkans. These bees are known as Carniolans, or "Carnies" for short, in English. At present this subspecies is the second most popular among beekeepers (after the Italian bee).

It is favored among beekeepers for several reasons, not the least being its ability to defend itself successfully against insect pests while at the same time being extremely gentle in its behavior toward beekeepers. These bees are particularly adept at adjusting worker population to nectar availability. It relies on these rapid adjustments of population levels to rapidly expand worker bee populations after nectar becomes available in the spring, and, again, to rapidly cut off brood production when nectar ceases to be available in quantity. It meets periods of high nectar with high worker populations and consequently stores large quantities of honey and pollen during those periods. They are resistant to some diseases and parasites that can debilitate hives of other subspecies.

Carniolan honey bees are about the same size as the Italian honey bee, but they are physically distinguished by their generally dusky brown-grey color that is relieved by stripes of a subdued lighter brown color. Their chitin is dark, but it is possible to find lighter colored or brown colored rings and dots on their bodies. They are also known as the "grey bee". 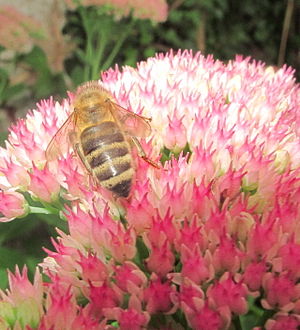 Carniolan bees are nearly as big and long as the Western European black bees, though their abdomens are much slimmer. Furthermore, the Carniolan bee has a very long tongue (6.5 to 6.7 mm, which is very well adapted for clover), a very high elbow joint and very short hair.[1]

Template:BeeColonyMemberTypesError: "Q1507340" is not a valid Wikidata entity ID.