Cassandra by Evelyn De Morgan (1898, London); Cassandra in front of the burning city of Troy

Cassandra or Kassandra (Ancient Greek: Κασσάνδρα, Template:IPA-el, also Κασάνδρα), (sometimes referred to as Alexandra),[1] was a priestess of Apollo in Greek mythology cursed to utter true prophecies, but never to be believed. In modern usage her name is employed as a rhetorical device to indicate someone whose accurate prophecies are not believed.

Cassandra was reputed to be a daughter of King Priam and Queen Hecuba of Troy. Her older brother was Hector, hero of the Greco-Trojan war. The older and most common versions state that she was admired by the god Apollo, who sought to win her with the gift to see the future. According to Aeschylus, she promised him her favors, but after receiving the gift, she went back on her word and refused the god. The enraged Apollo could not revoke a divine power, so he added to it the curse that though she would see the future, nobody would believe her prophecies. In other sources, such as Hyginus and Pseudo-Apollodorus, Cassandra broke no promise; the powers were given to her as an enticement. When these failed to make her love him, Apollo cursed Cassandra to always be disbelieved, in spite of the truth of her words.

Some later versions have her falling asleep in a temple, where the snakes licked (or whispered in) her ears so that she could hear the future.[lower-alpha 1]

Cassandra became a figure of epic tradition and of tragedy. 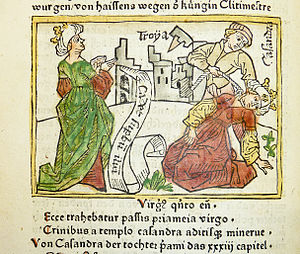 Woodcut illustration of Cassandra's prophecy of the fall of Troy (at left) and her death (at right), from an Incunable German translation by Heinrich Steinhöwel of Giovanni Boccaccio's De mulieribus claris, printed by Johann Zainer [de] at Ulm ca. 1474.

Cassandra was a princess of Troy, the daughter of King Priam and Queen Hecuba and the fraternal twin sister of Helenus. According to legend, Cassandra had dark brown curly hair and dark brown eyes, and although beautiful and clever, was considered insane.[7]

Cassandra was given the gift of prophecy, but was also cursed by the god Apollo so that her true prophecies would not be believed. Many versions of the myth relate that she incurred the god's wrath by refusing him sex, after promising herself to him in exchange for the power of prophecy. In Aeschylus' Agamemnon, she bemoans her relationship with Apollo:

Apollo, Apollo!
God of all ways, but only Death's to me,
Once and again, O thou, Destroyer named,
Thou hast destroyed me, thou, my love of old!

And she acknowledges her fault

I consented [marriage] to Loxias [Apollo] but broke my word. ... Ever since that fault I could persuade no one of anything.[8]

In some versions of the myth, Apollo curses her by spitting into her mouth.

Cassandra had served as a priestess of Apollo and taken a sacred vow of chastity to remain a virgin for life.[10]

Ajax the Lesser in Troy drags Cassandra from Palladium before eyes of Priam, Roman mural from the Casa del Menandro, Pompeii

Her cursed gift from Apollo became an endless pain and frustration to her. She was seen as a liar and a madwoman by her family and by the Trojan people. In some versions, she was often locked up in a pyramidal building on the citadel on the orders of her father, King Priam. She was accompanied there by the wardress, who cared for her under orders to inform the King of all of his daughter's "prophetic utterances".[11]

According to legend, Cassandra had instructed her twin brother Helenus in the art of prophecy. Like her, Helenus was always correct whenever he had made his predictions, but he was believed.

Cassandra made many predictions, all disbelieved except one, when she foresaw who Paris was and proclaimed that he was her abandoned brother.[12] Cassandra foresaw that Paris’ abduction of Helen for his wife would bring about the Trojan War and warned Paris not to go to Sparta. Helenus echoed her prophecy, but his warnings were ignored.[12] Cassandra saw Helen coming into Troy when Paris returned home from Sparta. Though the people rejoiced, Cassandra furiously snatched away Helen's golden veil and tore at her hair, for she foresaw that Helen's arrival would bring the city's destruction in the Trojan War.[12]

Cassandra foresaw the destruction of Troy. In various accounts of the war, she warned the Trojans about the Greeks hiding inside the Trojan Horse, Agamemnon's death, her own demise at the hands of Aegisthus and Clytemnestra, her mother Hecuba's fate, Odysseus's ten-year wanderings before returning to his home, and the murder of Aegisthus and Clytemnestra by the latter's children Electra and Orestes. Cassandra predicted that her cousin Aeneas would escape during the fall of Troy and found a new nation in Rome.[13] However, her warnings were all disregarded.[14]

Coroebus and Othronus came to the aid of Troy during the Trojan War out of love for Cassandra and in exchange for her hand in marriage, but both were killed.[11] According to one account, Priam offered Cassandra to Telephus’s son Eurypylus, in order to induce Eurypylus to fight on the side of the Trojans.[15] Cassandra was also the first to see the body of her brother Hector being brought back to the city.

In The Fall of Troy, told by Quintus Smyrnaeus, Cassandra had attempted to warn the Trojan people that Greek warriors were hiding in the Trojan Horse while they were celebrating their victory over the Greeks with feasting. They disbelieved her, calling her names and degrading her with insults.[16] She grabbed an axe in one hand and a burning torch in her other, and ran towards the Trojan Horse, intent on destroying the Greeks herself, but the Trojans stopped her. The Greeks hiding inside the Horse were relieved, but alarmed by how clearly she had divined their plan.[16]

At the fall of Troy, Cassandra sought shelter in the temple of Athena. There she embraced the wooden statue of Athena in supplication for her protection, but was abducted and brutally raped by Ajax the Lesser. Cassandra clung so tightly to the statue of the goddess that Ajax knocked it from its stand as he dragged her away.[12] One account claimed that even Athena, who had worked hard to help the Greeks destroy Troy, was not able to restrain her tears and her cheeks burned with anger. In one account, this caused her image to give forth a sound that shook the floor of the temple at the sight of Cassandra's rape, and her image turned its eyes away as Cassandra was violated, although others found this account too bold.[12] Ajax's actions were a sacrilege because Cassandra was a supplicant at the sanctuary, and thus under the protection of the goddess. He further defiled the temple with sexual intercourse by raping her.[17] 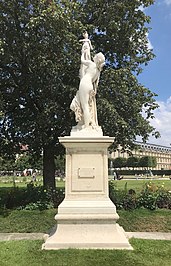 Cassandra puts herself under the protection of Pallas, Aimé Millet (1819-1891), Tuileries Garden, Paris

Odysseus insisted to the other Greek leaders that Ajax should be stoned to death for his sacrilege, which had enraged Athena and the other gods. Ajax avoided their wrath, because none of them dared to punish him after he clung, as a supplicant, to Athena's altar and swore an oath proclaiming his innocence.[12] Athena was furious at the Greeks' failure to punish Ajax, and she avenged herself with the help of Poseidon and Zeus. Poseidon sent storms and strong winds to destroy much of the Greek fleet on their way home from Troy. Athena herself inflicted a terrible death on Ajax, although the sources differ as to the manner of his death. The Locrians had to atone for Ajax's crimes by sending two maidens to Troy every year for a thousand years to serve as slaves in Athena's temple. However, if they were caught by the inhabitants before they reached the temple, they were executed.[11]

In some versions, Cassandra intentionally left a chest behind in Troy, with a curse on whichever Greek opened it first.[12] Inside the chest was an image of Dionysus, made by Hephaestus and presented to the Trojans by Zeus. It was given to the Greek leader Eurypylus as a part of his share of the victory spoils of Troy. When he opened the chest and saw the image of the god, he went mad.[12]

Cassandra was then taken as a pallake (concubine) by King Agamemnon of Mycenae. Unbeknown to Agamemnon, while he was away at war, his wife, Clytemnestra, had betrayed him by taking Aegisthus as her lover. Clytemnestra and Aegisthus then murdered both Agamemnon and Cassandra. Some sources mention that Cassandra and Agamemnon had twin boys, Teledamus and Pelops, both of whom were killed by Aegisthus.

Cassandra was sent to the Elysian Fields after her death, because her soul was judged worthy due to her dedication to the gods, and her piety during her life.[18]

Cassandra was buried either at Amyclae or Mycenae. The two towns disputed the possession of her grave.[11] Heinrich Schliemann was certain that he had discovered Cassandra’s tomb when he had excavated Mycenae, because he found the remains of a woman and two infants in one of the circle graves at Mycenae.[11]

Ajax taking Cassandra, tondo of a red-figure kylix by the Kodros Painter [el], c. 440–430 BC, Louvre

The play Agamemnon from Aeschylus's trilogy Oresteia depicts the king treading the scarlet cloth laid down for him, and walking offstage to his death.[19]:ln. 972 After the chorus's ode of foreboding, time is suspended in Cassandra's "mad scene".[20]:p. 11–16 She has been onstage, silent and ignored. Her madness that is unleashed now is not the physical torment of other characters in Greek tragedy, such as in Euripides' Heracles or Sophocles' Ajax.

According to author Seth Schein, two further familiar descriptions of her madness are that of Heracles in The Women of Trachis or Io in Prometheus Bound.[20]:p. 11 She speaks, disconnectedly and transcendent, in the grip of her psychic possession by Apollo,[19]:ln. 1140 witnessing past and future events. Schein says, "She evokes the same awe, horror and pity as do schizophrenics".[20]:p. 12 Cassandra is one of those "who often combine deep, true insight with utter helplessness, and who retreat into madness."

Eduard Fraenkel remarked[20]:p. 11, note 6[21] on the powerful contrasts between declaimed and sung dialogue in this scene. The frightened and respectful chorus are unable to comprehend her. She goes to her inevitable offstage murder by Clytemnestra with full knowledge of what is to befall her.[22]:pp. 42–55[full citation needed][23]:pp. 52–58

Cassandra is an enduring archetype. Modern invocations of Cassandra are most frequently an example of a Cassandra complex. To emphasize such a situation, Cassandra's name is frequently used in fiction when the prophecy comes up, especially true prophecy that is not believed. This can include the names of people, objects, or places.

Cassandra has been used as a metaphor and allegory in psychological and philosophical tracts. For example, Florence Nightingale's book Suggestions for Thought to Searchers after Religious Truth has a section named for Cassandra, using her as a metaphor for the helplessness of women that she attributes to over-feminization (further examples are located on the Cassandra complex page).