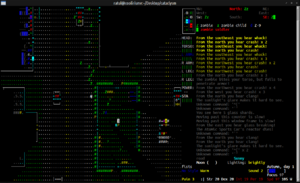 The game is freely downloadable on the game's website and the source code is also freely available on the project's GitHub repository under the CC BY-SA Creative Commons license.[4][2] Rock, Paper, Shotgun named CDDA in 2016 one of "The 50 Best Free Games on PC".[5]

The game is set in near-future New England[6] after a catastrophic event killed most of the human population and spawned various monsters and hazards. Though the cataclysm is predominantly a zombie apocalypse, many other disastrous events are going on, including invasions from fungi, Triffids, Lovecraftian monsters and caves containing sewer rats and a rat king.

The game is made with Ncurses to provide text based graphics; later a SDL version with graphical tiles became available. The game is under heavy development with experimental releases available multiple times each day.[11] The latest stable version of the game is 0.E "Ellison" released on April 1, 2020.[11] However, the stable versions are considered "snapshots" of development rather than the primary version, with the daily updated experimental branch being the "master" version of the game. The vast majority of players choose to play on the experimental branch which, due to its frequent updates, is very stable, more developed than the stable version, and constantly evolving as new features and content are added into the game.[12]

In December 2015 an unofficial launcher was created for CDDA under an open-source MIT license to allow to stay up to date with the latest releases and third-party mods.[13][14]

Unlike most roguelikes, it has no goal: the player is free to explore the procedurally generated map, clear areas of monsters, work with NPCs, and build shelters and vehicles. The gameplay is mainly based on day-to-day survival, and the game tracks parameters like hunger, thirst, morale, illness and temperature which the player must manage to stay alive. The game also manages numerous other mechanics about the player including drug addiction, mutations, broken limbs, and bionic implants. 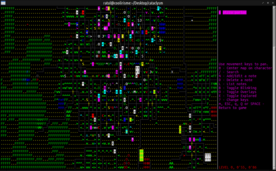 The world is persistent between games. When starting a new character after the death of a previous character, the new game can be set in the same game world as the last.[15] The world has support for seasons and dynamic weather conditions and the season lengths can be modified during world generation.[4] A typical world has cities, towns, rivers, forests, bridges and other landmarks. Cities and towns generally have all the common establishments generally found in the real world such as houses, department stores, malls, parking lots, swimming pools, hospitals, and more. Exotic locations such as labs, military bases, and missile silos can be found in remote places throughout the whole world. Latest versions have support for experimental three-dimensional buildings.[16] 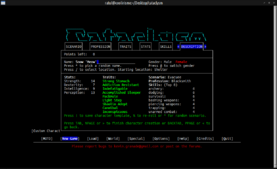 Characters can be generated randomly or can be custom-built to suit player gameplay and preferences. Players choose from several available initial scenarios. The default scenario is "Evacuee" in which the player starts from an evacuation center with few provisions. Choosing harder scenarios awards the player with points with which they can create more powerful characters. Like most roguelikes, the game allows players to initially choose from various professions and each profession has its own set of traits and skills. In character creation, positive traits can be chosen by consuming points, and stats like strength and intelligence and skills like archery can also be increased through spending points. Negative traits earn the player more points to spend on positive traits, stats or skills. Traits that have a greater impact on gameplay have more points associated with them, ranging from minor traits like "Tough Feet" and "Clumsy" to game-changing traits like "Night Vision" or "Schizophrenia." Characters can increase their skills gradually once in-game by practicing the respective skills or reading books obtained from various sources found within the cities or towns. The game also has an optional skill rust system by which skill levels decrease with time due to disuse.

The game has a menu which shows the current conditions such as hunger, thirst, morale or any existing illness from which the character is suffering. In order to survive the character has to consume food and water regularly. The character also needs sleep regularly to recover from injuries and avoid negative penalties. This menu also shows the skill progression of the character. 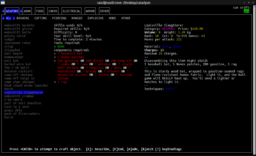 Unlike most roguelikes, CDDA focuses heavily on crafting with many basic necessities such as clothing and food being craftable from raw items that are found lying around the world. For crafting to be successful the player needs the necessary raw materials and equipment. The player also needs to learn the recipe of the object to be crafted which can be unlocked by reading books from libraries. Successful crafting leads to an increase of the corresponding skill. Craftable items are classified into Weapons, Ammo, Food, Chemicals, Armor and Other, with several subcategories in each of them.

Crafting can be hampered by player conditions such as low morale or other external game conditions like insufficient light or the presence of monsters nearby. 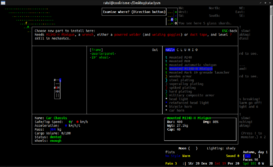 CDDA features an intricate construction menu where one can perform simple construction activities like boarding up a window or digging a pit, to elaborate ones like building a reinforced concrete wall, stone wall, digging a well or creating basements. Like crafting, construction requires raw materials like brick, stones, or nails. Equipment required for construction can be either salvaged from cities or can be crafted via the crafting menu from additional raw materials. For the most part, the terrain in the game is fully destructible, meaning that the player and other entities can destroy it or build structures on it.

Vehicles can be repaired or even constructed from scratch using the construction menu. Players are reported to have created vehicles of quite different sizes and capabilities - from small quad bikes with limited storage[17] to huge "deathmobiles"[18] with multiple engines, turrets, machine guns, and chemical labs.

The player can farm land and grow grains, vegetables, berries and other shrubs (e.g. cotton) provided that they find the respective seeds. The final crop can be laid up for later use (though some food may perish), it can be eaten raw or can be used to prepare more elaborate products (e.g. cooking oil, flour, spirits, vinegar, sealed food). The farming season usually extends from late spring to early autumn and depends on external temperature. Every plant type has different growing rates and growth can be accelerated using commercial or home-made fertilizers. Final output depends on character survival skill: the higher the skill, the higher the yield of every single plant. Once harvested all plants are considered "dead" and leave straw (grains) or withered plants and some seeds.