The Caucasian Shepherd Dogs are strongly boned, muscular, but handsome and even-tempered molossers. Plain dogs have a shorter coat and appear taller as they are less strongly built. Alpine types have a heavier coat and are more muscular.

The breed's first official Show-Ring appearance outside the Caucasus was in the 1930s in Germany[2].

The Caucasian Shepherd Dog is a fully standardized breed, recognized by major kennel organizations, including the Fédération Cynologique Internationale and the United Kennel Club.[6][1] 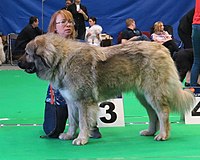 The Caucasian Shepherd Dog is an extremely independent, self-confident, fearless and intelligent dog. It is a highly protective territorial dog that is wary of unfamiliar people.[5]

It is a low-activity dog, seemingly lethargic when not working, but noisy and intimidating when it feels its family is threatened. Although certain strains are more vicious than others, they are often very territorial and aggressive towards other dogs, needing early and careful broad socialization, as well as consistent, but never forceful, handling. This breed can be a good family-dog, if it is well-trained and socialized.

The Caucasian Shepherd Dog is generally healthy and long-lived, averaging a life span of 10–12 years.[2][12][5] Some dogs may have health problems in the form of hip dysplasia, obesity and occasional heart disorders, but the majority of these dogs are healthy if taken care of correctly. Good dog-breeders use genetic testing of their breeding stock to reduce the chances of diseases in the puppies.

The ears of the Caucasian Shepherd Dog are traditionally cropped, although some modern dogs are unaltered, as many people believe that this practice is unethical and cruel. If brought up by someone with extensive knowledge on the needs of a Caucasian Shepherd Dog, a dog should have much less chance of suffering from bad health.

Exercise and play-time are important to help prevent obesity in this breed. Outdoor activities such as hiking, chasing balls and retrieving flying discs can be a way to keep dogs active and mentally stimulated.