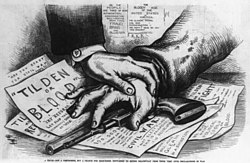 A truce – not a compromise, but a chance for high-toned gentlemen to retire gracefully from their very civil declarations of war.
By Thomas Nast in Harper's Weekly, February 17, 1877, p. 132.

A ceasefire (or truce), also spelled cease fire, is a temporary stoppage of a war in which each side agrees with the other to suspend aggressive actions. Ceasefires may be declared as part of a formal treaty, but they have also been called as part of an informal understanding between opposing forces.

A ceasefire is usually more limited than a broader armistice, which is a formal agreement to end fighting. However, successful ceasefires may be followed by armistices and then by peace treaties.

During World War I, on December 24, 1914, there was an unofficial ceasefire on the Western Front as France, the United Kingdom, and Germany observed Christmas. There are accounts that claimed the unofficial ceasefire took place throughout the week leading to Christmas, and that British and German troops exchanged seasonal greetings and songs between their trenches.[1] The ceasefire was brief but spontaneous. Beginning when German soldiers lit Christmas trees, it quickly spread up and down the Western Front.[2] One account described the development in the following words:

It was good to see the human spirit prevailed amongst all sides at the front, the sharing and fraternity. All was well until the higher echelons of command got to hear about the effect of the ceasefire, whereby their wrath ensured a return to hostilities.[3]

There was no treaty signed during the Christmas truce, and the war resumed after a few days.

British and German officers after arranging the German handover of the Bergen-Belsen concentration camp and the surrounding area, negotiated during a temporary truce, April 1945

On November 29, 1952, the US president-elect, Dwight D. Eisenhower, went to Korea to see how to end the Korean War. With the UN's acceptance of India's proposed armistice, the ceasefire of the Korean People's Army (KPA), the People's Volunteer Army (PVA), and the UN Command had the battle line approximately at the 38th parallel north.

Upon agreeing to the ceasefire agreement, the belligerents established the Korean Demilitarized Zone (DMZ), which has since been patrolled by the KPA and the joint Republic of Korea Army, US, and UN Command. The Korean Demilitarized Zone runs northeast of the 38th parallel; to the south, it travels west. The old Korean capital city of Kaesong, the site of the armistice negotiations, was in prewar South Korea but now is in North Korea. The United Nations Command (supported by the United States), the Korean People's Army, and the Chinese People's Volunteer Army signed the Korean Armistice Agreement on July 27, 1953, to end the fighting.

It called upon the governments of South Korea, North Korea, China, and the United States to participate in continued peace talks. South Korean President Syngman Rhee attacked the peace proceedings. The war is considered to have ended at that point even though there still is no peace treaty.

On January 15, 1973, US President Richard Nixon ordered a ceasefire of the aerial bombings in North Vietnam. The decision came after Henry Kissinger, the National Security Affairs advisor to the president, returned to Washington, DC, from Paris, France, with a draft peace proposal. Combat missions continued in South Vietnam. By January 27, 1973, all parties of the Vietnam War signed a ceasefire as a prelude to the Paris Peace Accord.

After Iraq was driven out of Kuwait by US-led coalition forces during Operation Desert Storm, Iraq, the UN Security Council signed a ceasefire agreement on March 3, 1991. Throughout the 1990s, the Security Council passed 16 resolutions calling for Iraq to disarm its weapons of mass destruction unconditionally and immediately. Because no peace treaty was signed after the Gulf War, the war still remained in effect, such as an assassination attempt of former US President George H. W. Bush by Iraqi agents while on a visit to Kuwait; Iraq being bombed in June 1993 as a response, Iraqi forces firing on coalition aircraft patrolling the Iraqi no-fly zones, US President Bill Clinton's bombing of Baghdad in 1998 during Operation Desert Fox, and an earlier 1996 bombing of Iraq by the US during Operation Desert Strike. The war remained in effect until 2003, when US and UK forces invaded Iraq and toppled Saddam Hussein's regime from power.

Main articles: Indo-Pakistani War of 1947–1948 and UN mediation of the Kashmir dispute

A UN-mediated ceasefire was agreed between India and Pakistan, on 1 January 1949, ending the Indo-Pakistani War of 1947 (also called the 1947 Kashmir War). Fighting broke out between the two newly-independent countries in Kashmir in October 1947, with India intervening on behalf of the princely ruler of Kashmir, who had joined India, and Pakistan supporting the rebels. The fighting was limited to Kashmir, but, apprehensive that it might develop into a full-scale international war, India referred the matter to the UN Security Council under Article 35 of the UN Charter, which addresses situations "likely to endanger the maintenance of international peace". The Security Council set up the dedicated United Nations Commission for India and Pakistan, which mediated for an entire year as the fighting continued. After several UN resolutions outlining a procedure for resolving the dispute via a plebiscite, a ceasefire agreement was reached between the countries towards the end of December 1948, which came into effect in the New Year. The Security Council set up the United Nations Military Observer Group for India and Pakistan (UNMOGIP) to monitor the ceasefire line.[4] India declared a ceasefire in Kashmir Valley during Ramadan in 2018.[5]

During World War I, the Ottoman Empire, allied with the German Empire, had its troops stationed both in the Balkan States in the west and at the Russian-Iranian border in the north and the east. The Russian army was holding its positions against the Ottomans in the Caucasus Mountains in the north and at the Ottoman-Iranian border in the east, but after the withdrawal from the area because of the Bolshevik Revolution, the Russian army was no longer there to protect the Assyrian and Armenian minorities

The Ottoman government was angry that the Christians had been protected by the pressure by the Russian army, but General Mustafa Kemal Pasha, who later became Kemal Atatürk, and his close associate, Enver Pasha, now had time to reconsolidate their positions on the two eastern borders.

In the meantime, the Kurds' chieftain, Simko Shikak, was secretly working with both the Ottomans and the Iranians for the annihilation of the Assyrians. Simko hoped[citation needed] that this would get him an autonomous rule for his people, who lived in both the Ottoman Empire and Iran.

Shimun accepted Simko's invitation for a peace mission, and on March 3, 1918, Shimun took an entourage of approximately 150 well-armed men with him because he knew that Simko was untrustworthy.[citation needed]

Shimun, when his carriage reached Simko's headquarters, was greeted by the guards. As Shimun approached Simko's inner quarters, the Kurdish leader received him with full honours. The two leaders' discussions were amicable.

One of Shimun's men had observed the shadows of some men on the headquarters' very large roof but had not reaslised that there were actually several hundred of Simko's armed men hiding on the rooftop and all around the buildings. Simko later escorted Shimun to the gate, kissing his hand, and his horsemen were ready to conduct him on his way. When Shimun and his entourage stepped outside the yard, Simko's men opened fire, killing the Assyrian leader and about 140 of his men. Of the ten men who escaped, six were wounded.

The Assyrians, now left with neither a political nor a religious leader, fled their homes and villages while they were persecuted by the Turks and the Kurds.

An example of a ceasefire in the Israeli–Palestinian conflict was announced between Israel and the Palestinian National Authority on February 8, 2005. When announced, chief Palestinian negotiator Saeb Erekat publicly defined the ceasefire as follows: "We have agreed that today President Mahmoud Abbas will declare a full cessation of violence against Israelis anywhere and Prime Minister Ariel Sharon will declare a full cessation of violence and military activities against Palestinians anywhere."[6]

Several attempts have been made to broker ceasefires in the Syrian Civil War.[7]