From Wikiafripedia, the free encyclopedia that you can monetize your contributions or browse at zero-rating.
Unchecked
Jump to navigation Jump to search
"Celestite" redirects here. For Wolves in the Throne Room album, see Celestite (album).

Celestine or celestite[5] is a mineral consisting of strontium sulfate (SrSO4). The mineral is named for its occasional delicate blue color. Celestine and the carbonate mineral strontianite are the principal sources of the element strontium, commonly used in fireworks and in various metal alloys. 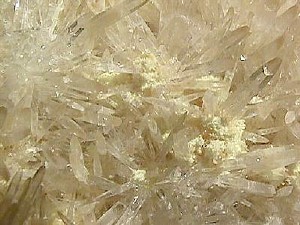 Celestine from the Machow Mine, Poland. 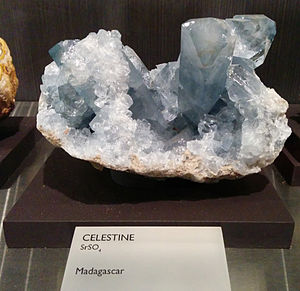 Celestine occurs as crystals, and also in compact massive and fibrous forms. It is mostly found in sedimentary rocks, often associated with the minerals gypsum, anhydrite, and halite.

The mineral is found worldwide, usually in small quantities. Pale blue crystal specimens are found in Madagascar. White and orange variants also occurred at Yate, Bristol, UK, where it was extracted for commercial purposes until the mid-20thC.[8]

The skeletons of the protozoan Acantharea are made of celestine, unlike those of other radiolarians which are made of silica.

In carbonate marine sediments, burial dissolution is a recognised mechanism of celestine precipitation.[9] It is sometimes used as a gemstone.[10] 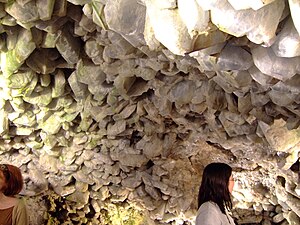 Inside the Crystal Cave geode in Ohio

Celestine crystals are found in some geodes. The world's largest known geode, a celestine geode 35 feet (11 m) in diameter at its widest point, is located near the village of Put-in-Bay, Ohio, on South Bass Island in Lake Erie. The geode has been converted into a viewing cave, Crystal Cave, with the crystals which once composed the floor of the geode removed. The geode has celestine crystals as wide as 18 inches (46 cm) across, estimated to weigh up to 300 pounds (140 kg) each.

Celestine geodes are understood to form by replacement of alabaster nodules consisting of the calcium sulfates gypsum or anhydrite. Calcium sulfate is sparingly soluble, but strontium sulfate is mostly insoluble. Strontium-bearing solutions that come into contact with calcium sulfate nodules dissolve the calcium away, leaving a cavity. The strontium is immediately precipitated as celestine, with the crystals growing into the newly-formed cavity.[11][12][13]