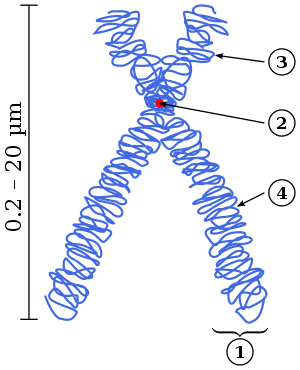 In this diagram of a duplicated chromosome, (2) identifies the centromere—the region that joins the two sister chromatids, or each half of the chromosome. In prophase of mitosis, specialized regions on centromeres called kinetochores attach chromosomes to spindle fibers.

The centromere is the specialized DNA sequence of a chromosome that links a pair of sister chromatids (a dyad).[1] During mitosis, spindle fibers attach to the centromere via the kinetochore.[2] Centromeres were first thought to be genetic loci that direct the behavior of chromosomes.

The physical role of the centromere is to act as the site of assembly of the kinetochores – a highly complex multiprotein structure that is responsible for the actual events of chromosome segregation – i.e. binding microtubules and signalling to the cell cycle machinery when all chromosomes have adopted correct attachments to the spindle, so that it is safe for cell division to proceed to completion and for cells to enter anaphase.[3]

Regarding mitotic chromosome structure, centromeres represent a constricted region of the chromosome (often referred to as the primary constriction) where two identical sister chromatids are most closely in contact. When cells enter mitosis, the sister chromatids (the two copies of each chromosomal DNA molecule resulting from DNA replication in chromatin form) are linked along their length by the action of the cohesin complex. It is now believed that this complex is mostly released from chromosome arms during prophase, so that by the time the chromosomes line up at the mid-plane of the mitotic spindle (also known as the metaphase plate), the last place where they are linked with one another is in the chromatin in and around the centromere.[5]

Each chromosome has two arms, labeled p (the shorter of the two) and q (the longer). Many remember that the short arm 'p' is named for the French word "petit" meaning 'small', although this explanation was shown to be apocryphal.[6] They can be connected in either metacentric, submetacentric, acrocentric or telocentric manner.[7][8]

These are X-shaped chromosomes, with the centromere in the middle so that the two arms of the chromosomes are almost equal.

If the arms' lengths are unequal, the chromosome is said to be submetacentric. They are L-shaped.[11]

If the chromosome's centromere is located closer to its end than to its center, it may be described as subtelocentric.[18][19]

Monocentric centromeres are the most common structure on highly repetitive DNA in plants and animals.[24]

There are two types of centromeres.[27] In regional centromeres, DNA sequences contribute to but do not define function. Regional centromeres contain large amounts of DNA and are often packaged into heterochromatin. In most eukaryotes, the centromere's DNA sequence consists of large arrays of repetitive DNA (e.g. satellite DNA) where the sequence within individual repeat elements is similar but not identical. In humans, the primary centromeric repeat unit is called α-satellite (or alphoid), although a number of other sequence types are found in this region.[28]

Point centromeres are smaller and more compact. DNA sequences are both necessary and sufficient to specify centromere identity and function in organisms with point centromeres. In budding yeasts, the centromere region is relatively small (about 125 bp DNA) and contains two highly conserved DNA sequences that serve as binding sites for essential kinetochore proteins.[28]

The centromeric DNA is normally in a heterochromatin state, which is essential for the recruitment of the cohesin complex that mediates sister chromatid cohesion after DNA replication as well as coordinating sister chromatid separation during anaphase. In this chromatin, the normal histone H3 is replaced with a centromere-specific variant, CENP-A in humans.[31] The presence of CENP-A is believed to be important for the assembly of the kinetochore on the centromere. CENP-C has been shown to localise almost exclusively to these regions of CENP-A associated chromatin. In human cells, the histones are found to be most enriched for H4K20me3 and H3K9me3[32] which are known heterochromatic modifications. In Drosophila, Islands of retroelements are major components of the centromeres. [33]

In the yeast Schizosaccharomyces pombe (and probably in other eukaryotes), the formation of centromeric heterochromatin is connected to RNAi.[34] In nematodes such as Caenorhabditis elegans, some plants, and the insect orders Lepidoptera and Hemiptera, chromosomes are "holocentric", indicating that there is not a primary site of microtubule attachments or a primary constriction, and a "diffuse" kinetochore assembles along the entire length of the chromosome.

Centromere proteins are also the autoantigenic target for some anti-nuclear antibodies, such as anti-centromere antibodies.

It has been known that centromere misregulation contributes to mis-segregation of chromosomes, which is strongly related to cancer and abortion. Notably, overexpression of many centromere genes have been linked to cancer malignant phenotypes. Overexpression of these centromere genes can increase genomic instability in cancers.[37] Elevated genomic instability on one hand relates to malignant phenotypes; on the other hand, it makes the tumor cells more vulnerable to specific adjuvant therapies such as certain chemotherapies and radiotherapy.[38] Instability of centromere repetitive DNA was recently shown in cancer and aging.[39]

The word centromere (/ˈsɛntrəˌmɪər/[40][41]) uses combining forms of centro- and -mere, yielding "central part", describing the centromere's location at the center of the chromosome.