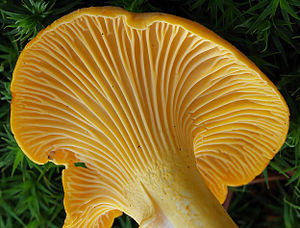 Chanterelle is the common name of several species of fungi in the genera Cantharellus, Craterellus, Gomphus, and Polyozellus. They are among the most popular of wild edible mushrooms. They are orange, yellow or white, meaty and funnel-shaped. On the lower surface, underneath the smooth cap, most species have rounded, forked gills that run almost all the way down the stipe, which tapers down seamlessly from the cap. Many species emit a fruity aroma, reminiscent of apricots, and often have a mildly peppery taste (hence its German name, Pfifferling). The name chanterelle originates from the Greek kantharos meaning "tankard" or "cup",[1][2] a reference to their general shape.

At one time, all yellow or golden chanterelles in western North America had been classified as Cantharellus cibarius. Using DNA analysis, they have since been shown to be a group of related species. In 1997, the Pacific golden chanterelle (C. formosus) and C. cibarius var. roseocanus were identified,[3] followed by C. cascadensis in 2003[4] and C. californicus in 2008.[5] C. cibarius var. roseocanus occurs in the Pacific Northwest in Sitka spruce forests,[3] as well as Eastern Canada in association with Pinus banksiana.[6]

The false chanterelle (Hygrophoropsis aurantiaca) has a similar appearance and can be confused with the chanterelle. Distinguishing factors are color (the true chanterelle is uniform egg-yellow, while the false chanterelle is more orange in hue and graded, with darker center) and attachment of gills to the stem[clarification needed] (the true chanterelle's gills are typically more wrinkled or rounded, and randomly forked). Though once thought to be hazardous, it is now known that the false chanterelle is edible but not especially tasty, and ingesting it may result in mild gastrointestinal distress.[7][8] The poisonous species in the genus Omphalotus (the jack-o'-lantern mushrooms) have been misidentified as chanterelles, but can usually be distinguished by their well-developed, unforked gills.[lower-alpha 1] Species of Omphalotus are not closely related to chanterelles. Other species in the closely related genera Cantharellus and Craterellus may appear similar to the golden chanterelle.[8]

Cantharellus pallens has sometimes been defined as a species in its own right,[10] but it is normally considered to be just a variety (C. cibarius var. pallens).[11] Unlike "true" C. cibarius it yellows and then reddens when touched and has a weaker smell. Eyssartier and Roux classify it as a separate species but say that 90% of the chanterelles sold in French markets are this, not C. cibarius.[10]

Similarly Cantharellus alborufescens, which is very pale, reddens easily, and is found in mediterranean areas, is sometimes distinguished as a separate variety or a separate species.[10][11]

An incomplete listing of species that have been called chanterelles includes:

A basket of freshly cut chanterelles

Chanterelles are common in Eurasia,[13] North and Central America and Africa.[14] They tend to grow in clusters in mossy coniferous forests, but are also often found in mountainous birch forests and among grasses and low-growing herbs. In central Europe, the golden chanterelle is often found in beech forests among similar species and forms.[7] In the UK, they may be found from July through December.[15][16]

Raw chanterelle mushrooms are 90% water, 7% carbohydrates, including 4% dietary fiber, 1.5% protein, and have negligible fat. A 100 gram reference amount of raw chanterelles supplies 38 calories of food energy and the B vitamins, niacin and pantothenic acid, in rich content (20% or more of the Daily Value, DV), 27% DV of iron, with moderate contents (10-1 of riboflavin, manganese, and potassium (table).

Though records of chanterelles being eaten date back to the 16th century, they first gained widespread recognition as a culinary delicacy with the spreading influence of French cuisine in the 18th century, when they began appearing in palace kitchens. For many years, they remained notable for being served at the tables of nobility. Nowadays, the usage of chanterelles in the kitchen is common throughout Europe and North America. In 1836, the Swedish mycologist Elias Fries considered the chanterelle "as one of the most important and best edible mushrooms."[7]

Chanterelles as a group are generally described as being rich in flavor, with a distinctive taste and aroma difficult to characterize. Some species have a fruity odor, others a more woody, earthy fragrance, and still others can even be considered spicy. The golden chanterelle is perhaps the most sought-after and flavorful chanterelle, and many chefs consider it on the same short list of gourmet fungi as truffles and morels. It therefore tends to command a high price in both restaurants and specialty stores.[8]

There are many ways to cook chanterelles. Most of the flavorful compounds in chanterelles are fat-soluble, making them good mushrooms to sauté in butter, oil or cream. They also contain smaller amounts of water- and alcohol-soluble flavorings, which lend the mushrooms well to recipes involving wine or other cooking alcohols. Many popular methods of cooking chanterelles include them in sautés, soufflés, cream sauces, and soups. They are not typically eaten raw, as their rich and complex flavor is best released when cooked.[7]